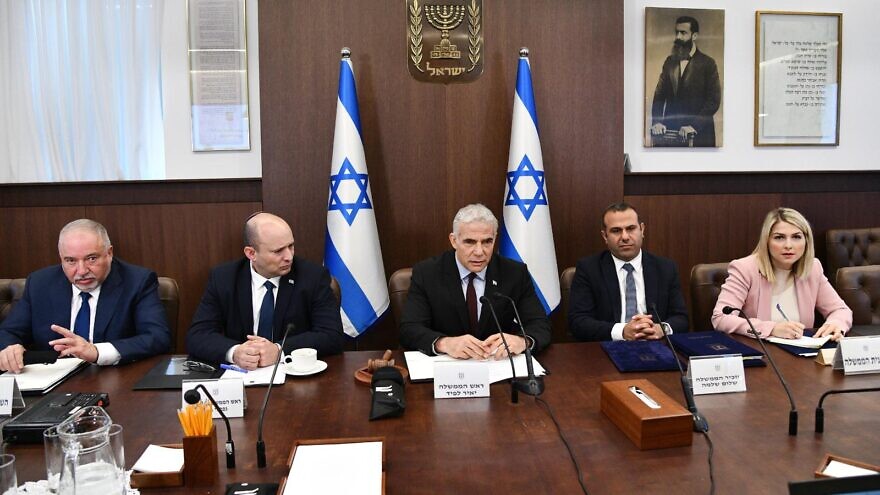 (July 10, 2022 / JNS) Ahead of U.S. President Joe Biden’s arrival in Israel on July 13, Israeli Prime Minister Yair Lapid on Sunday said this would be a “historic” week for the Jewish state and called Biden “one of the closest friends that Israel has ever had in American politics.”

“This visit will deal with both challenges and opportunities,” Lapid said at the weekly cabinet meeting. He emphasized that discussions would focus on progress Iran has made in its nuclear program.

The prime minister thanked the Biden administration for thus far not removing Iran’s Islamic Revolutionary Guard Corps from its list of foreign terrorist organizations, and noted that Tehran “is behind Hezbollah and supports Hamas, and Iranian terror cells recently tried to murder Israeli tourists in Istanbul.”

Lapid also highlighted the significance of Biden’s upcoming direct flight from Israel to Saudi Arabia, saying the U.S. leader would “carry with him a message of peace and hope. … Israel extends its hand to all the countries of the region and calls on them to build ties with us, establish relations with us and change history for our children.”

He also offered condolences on behalf of all Israelis “to our friend and ally Japan, on the death of former Prime Minister Shinzo Abe, who was assassinated on Friday.”

“He was a great leader and a great friend of Israel. We stand by Japan during this difficult time,” Lapid said.