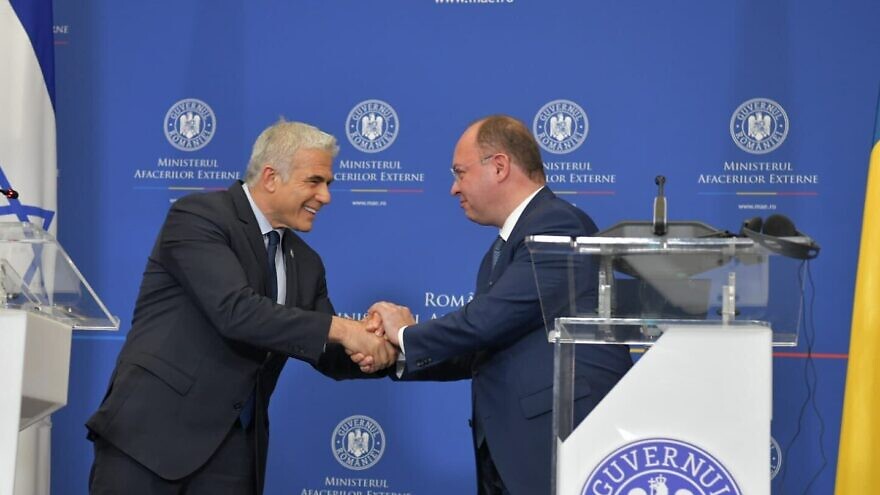 (March 13, 2022 / JNS) Israeli Foreign Minister Yair Lapid met in Bucharest on Sunday with his Romanian counterpart, Bogdan Aurescu, to discuss the Ukraine crisis and the refugee issue. Following his meeting with Aurescu, Lapid was scheduled to meet with Romanian Prime Minister Nicolae Ciucă, according to a statement from his office.

Lapid was also scheduled to tour a Jewish Agency for Israel refugee center in Bucharest and visit the border crossing in Siret, where Foreign Ministry personnel have been stationed “almost from the first day of the fighting” to help refugees, according to the statement.

Lapid praised the Romanian government over its efforts to assist refugees and its cooperation with Israel to that end.

“The Romanian government has helped and is helping Israel save many lives,” said Lapid. Jewish children from an orphanage in Odessa had crossed into Romania at Siret, as had Jewish children with cancer who were then flown to Israel for treatment, he said.

The cooperation between Israel and Romania had resulted in “thousands” of lives being saved, he added.

“I thank you my friend, and I thank the Romanian government for their cooperation [and] goodwill. This is further proof of the brave and longstanding friendship between our countries, in peacetime and also in times of war,” said Lapid, according to the statement.

“Israel, like Romania, condemns the Russian invasion of Ukraine. It has no justification, and we call on Russia to stop the shooting and attacks and to resolve the issues around the negotiating table. Israel will help as much as it can to reach a peaceful solution. We are working in full coordination with our ally, the United States, and with our European partners to try to end this violent tragedy as quickly as possible,” he said.

On Monday, Lapid is scheduled to travel to Slovakia to meet with Slovakian President Zuzana Čaputová and Foreign Minister Ivan Korčok.