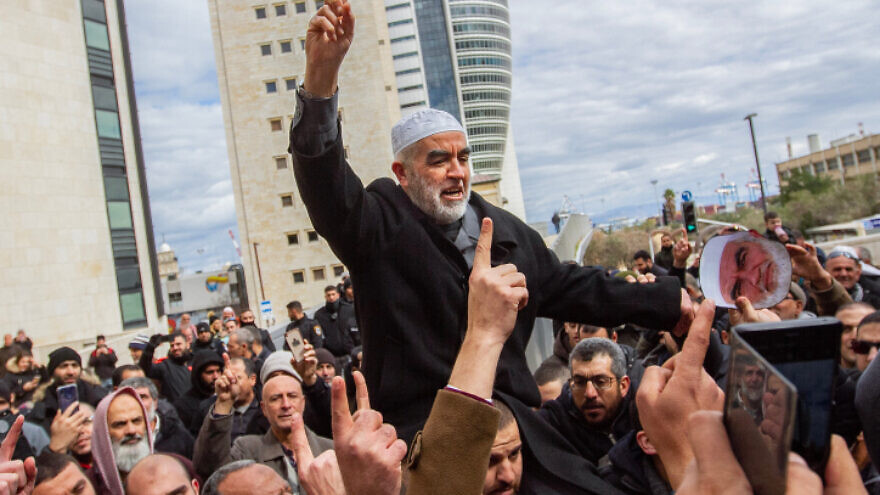 Sheikh Raed Salah, leader of the northern branch of the Islamic Movement in Israel, seen with supporters after a court hearing in Haifa on Feb. 10, 2020. Photo by Flash90.
Spread the word.
Help JNS grow!
Share now:

(August 16, 2020 / JNS) The head of the outlawed northern branch of the Islamic Movement in Israel, Sheikh Raed Salah, began his prison sentence on Sunday for incitement to terrorism.

Some 200 supporters arrived at the Kishon Detention Facility, where Salah will serve his 28-month jail term, Arutz Sheva reported.

Salah was convicted on charges of incitement and racism by the Haifa Magistrate’s Court in February. He appeal was rejected last month by the Haifa District Court.

The charges were drawn from speeches he made in 2017, after an attack on the Temple Mount in Jerusalem left two Israeli police officers dead. Salah called on others to follow the example of the Arab-Israeli gunmen.

The northern branch of the Islamic Movement was banned by Israel in November 2015, primarily due to its ties to Hamas, the terrorist organization that rules the Gaza Strip.

The Islamic Movement is is popular among Arab Israelis. Its more pragmatic southern branch remains legal. It makes a point of obeying local laws, and participates in elections with the United Arab List Party, part of the Joint Arab List bloc, which garnered 15 seats in the last Knesset elections on March 2.