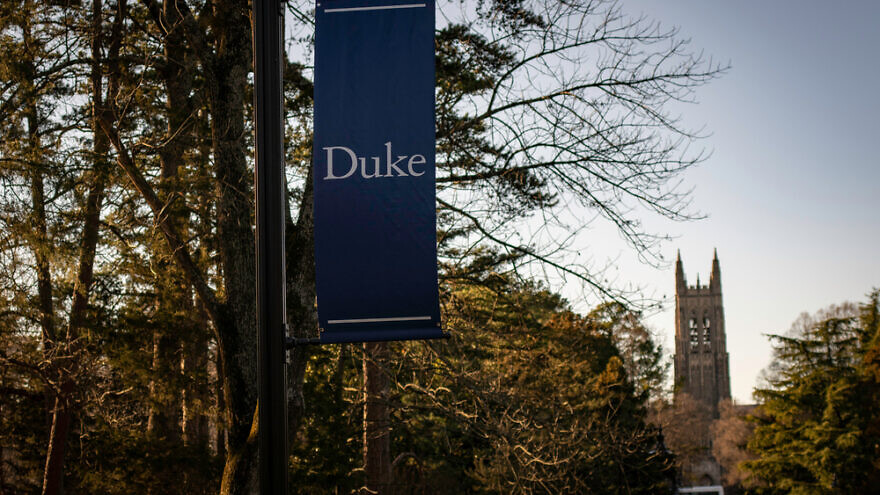 (December 15, 2021 / JNS) The Louis D. Brandeis Center for Human Rights Under Law is calling on Duke University president Vincent Price to formally recognize the school’s chapter of Students Supporting Israel, saying it is the “only way to ensure the university’s compliance” with federal law.

In an email sent to Price on Tuesday, the advocacy group addressed the decision made by the Duke University Student Government (DSG) in November to uphold DSG president Christina Wang’s veto to formally recognize SSI, also known as “Duke SSI.”

After the Duke Senate upheld Wang’s veto, Price said DSG’s decision is “independent” from the university, and that the administration will still provide financial and program support to SSI, despite it not having formal recognition by the student government.

The Brandeis Center’s group of lawyers said in their letter, “while we appreciate your efforts to address the matter in your recent statement, it is not sufficient under the law merely to provide ‘options to secure financial and programmatic support’ without formal recognition.”

The attorneys explained that Duke is “legally obligated to take corrective action in response to the unlawful treatment of Duke SSI by formally recognizing the student organization and ensuring it has equal access to resources” under Title VI of the Civil Rights Act of 1964, which forbids discrimination based on national origin and shared ethnicity.

They also detailed how SSI—from the moment it applied for recognition—has been “subjected to special scrutiny that other groups did not have to endure.” For example, SSI student representatives were subjected to extensive questioning before the student government vote. The Brandeis Center also pointed out that never before has the presidential veto been used to revoke a formal recognition

“The DSG’s actions were discriminatory and require action by the university,” wrote the Brandeis Center. “A university violates Title VI when its student government rejects a Jewish student organization’s request for recognition based on standards that are not applied to non-Jewish groups.”

The lawyers concluded by reminding Price that Duke University signed a Resolution Agreement with the U.S. Department of Education, Office for Civil Rights, “in which it agreed to take certain measures to address allegations of anti-Semitism. In light of that pending agreement, the university should be particularly sensitive to its legal obligation to address instances of anti-Semitic discrimination on campus in a prompt and effective manner.”