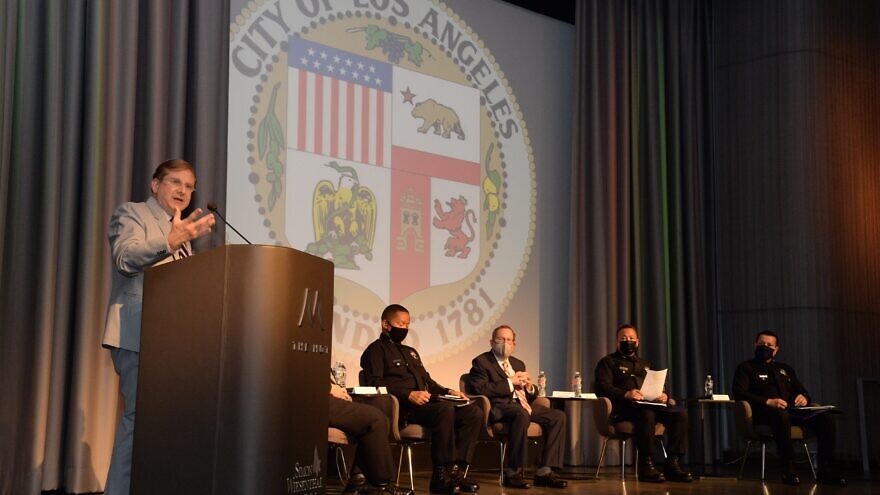 (September 5, 2021 / JNS) Los Angeles City Councilmember Paul Koretz hosted a meeting on Sept. 1 at the Museum of Tolerance with presentations by members of the Los Angeles Police Department to Jewish leaders and community members regarding synagogue and institutional security in time for the High Holidays.

The town hall drew rabbis and communal leaders from throughout the San Fernando Valley and West Los Angeles, and highlighted the action plans of LAPD, especially during Rosh Hashanah and Yom Kippur, as well as offered security and reporting tips for the community to assist LAPD in securing institutions and neighborhoods.

“As councilmember for the 5th District, which has deep roots for the Jewish community, I want to make sure that all Jewish people know the rights and resources they have when facing hate,” said Koretz. “According to the Anti-Defamation League’s annual ‘Audit of Anti-Semitic Incidents,’ 2019 and 2020 were, respectively, the highest and third-highest years on record for cases of harassment, vandalism and assault against Jews in the United States since tracking began in 1979. These numbers are shocking and heartbreaking, but they are also a call to action.”

The two-hour program was moderated by Koretz’s director of public safety, Greg Martayan, and featured a lively question-and-answer session. Joining the event were LAPD captains from throughout the region, who shared specific plans tailored for their geographic areas.

Before it began, Koretz presented the deputy chiefs and commanders, along with Cooper and director of the Museum of Tolerance Liebe Geft, with commendations from the City of Los Angeles.

After the meeting, participants and LAPD command staff broke off into sub-groups to close any communication gaps and exchange contact information. Also disseminated were official brochures specific to reporting, how to report and where to report.