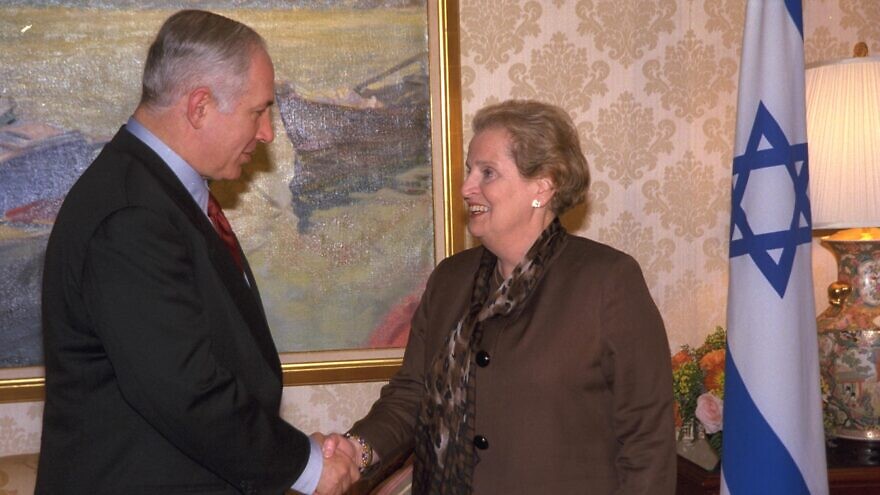 (March 25, 2022 / JNS) “Close the gates! Close the gates!” It sounds like lines ripped out of a movie, but it was Madeleine Albright running in her heels in the United States ambassador’s residence in Paris. Albright, the first woman—and Jewish-born—secretary of state, who died this week at 84, wanted to stop the infamous Yasser Arafat from leaving the compound.

The purpose of the meeting, during the second intifada, she said in an October 2000 statement, was “to find a way to end the violence, restore calm and ensure that there is no repeat of such an escalation.” The summit, she said, “must find a way again to end the current psychology of confrontation and begin to restore the psychology of peace-making.”

Albright, was born Marie Jana Korbelova, in 1937 in Prague to her parents, Joseph and Anna Spiegel. Josef served as a diplomat in the government of Czechoslovakia when World War II broke out. As a Jew, he was forced to flee the Germans and lived in exile in London. After the war, he served as Czechoslovakia’s ambassador to Yugoslavia until the Communist coup in 1948, when the family immigrated to the United States. “I’m an immigrant,” she said during a 2014 forum at the Aspen Institute, “when people asked me what’s the most important thing that ever happened to me, hands down it’s coming to America.”

In 1959, the renamed Madeleine (apparently, her grandmother gave her the nickname “Madeleine” when she was young, and she legally changed her name when she was an adolescent) earned her B.A. in political science from Wellesley College. That same year, she married Joseph Medill Patterson Albright in 1959. The couple had three daughters before divorcing in 1982.

In 1976, Albright earned a Ph.D. in Public Law and Government at Columbia University. 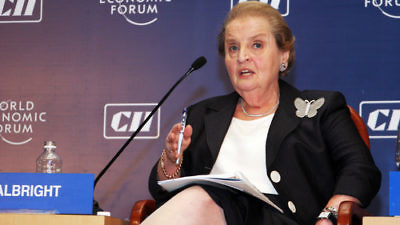 She later worked for Sen. Edmund Muskie (D-Maine), and as a staff member in the Carter White House and as an adviser to National Security Advisor Zbigniew Brzezinski.

In 1982, she became a Research Professor of International Affairs and Director of Women in Foreign Service Program at Georgetown University’s School of Foreign Service.

In 1993, after being appointed by President Bill Clinton as the U.S. Ambassador to the United Nations, she was raised from relative anonymity to the public light. In 1996, Clinton appointed her as Secretary of State.

‘An agreement is not yet in hand’

Before her confirmation, she told the Senate Foreign Relations Committee that U.S. diplomacy in the Middle East has helped to build a renewed dialogue between Israel and its Palestinian partners, producing significant progress on Israeli redeployment in Hebron.

“While an agreement is not yet in hand,” she said, the intensive negotiations “have restored a sense of momentum and greater confidence between the sides.”

Throughout, the process, she said, “we will be guided by America’s unshakeable commitment to Israel’s security and by our opposition to those who would disrupt this process through terrorism and violence.” 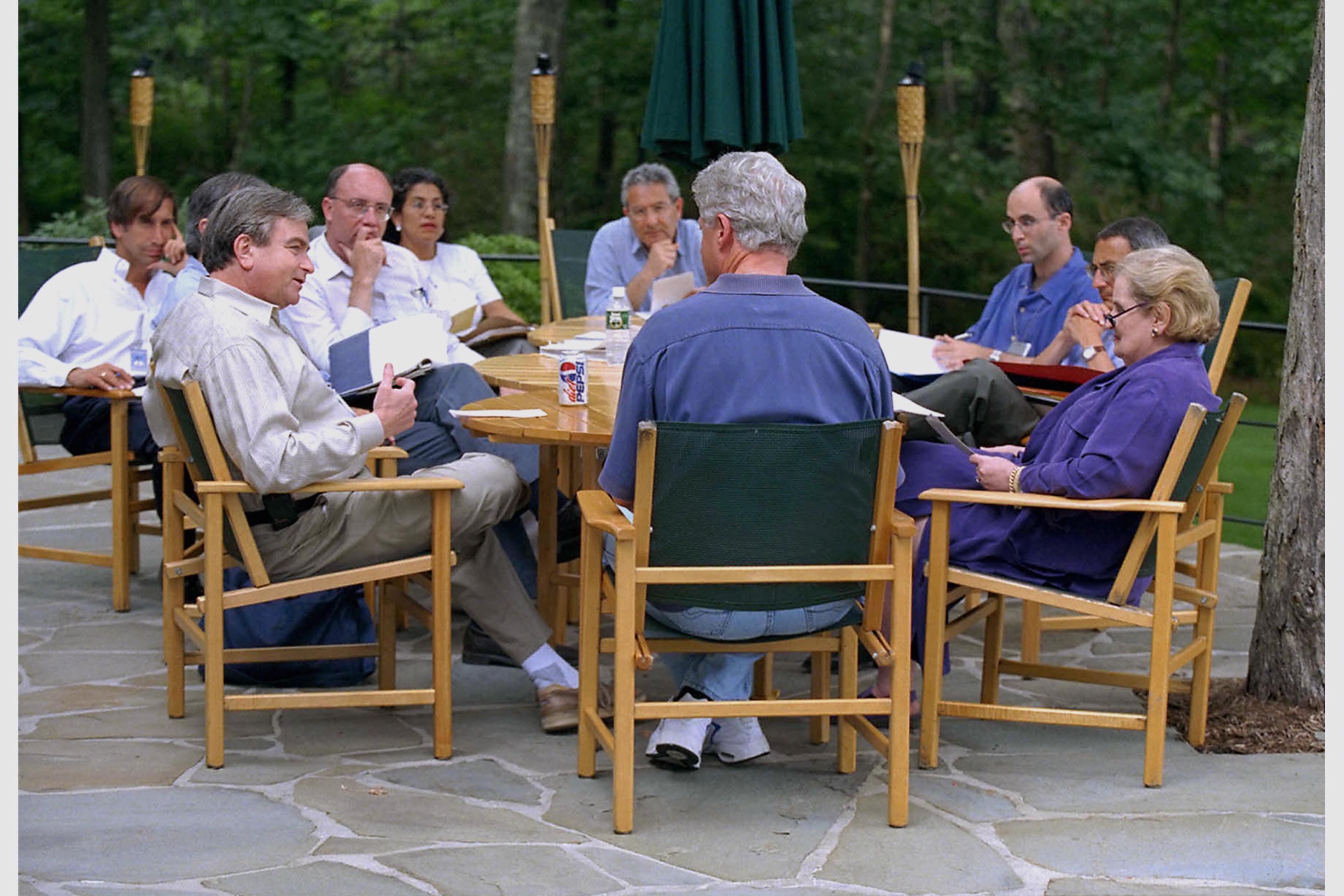 Over the years, Albright said in 2014, she personally spent “an awful lot of time” working on the peace of Israel with Palestinians. She joked that while many may want to go to Camp David for a visit, “I can tell you after two weeks in the rain with the Israelis and Palestinians, I don’t care if I ever go back.”

After that faithful 2000 meeting, Albright admitted that she was wrong about Arafat’s willingness. She told Israeli Prime Minister Ehud Barak that Arafat had no intent of significantly changing his demands and stance to forge a path to lasting peace—particularly in regards to Jerusalem and refugees. The topic is one that Albright assured the Israelis would never be on the table.

It was very different to a year earlier, in September 1999, when Arafat signed a document of understanding with Barak, and the Palestinian leader kissed Albright on both cheeks.

At the time, she said that she found a climate for peace that would need to be creativity found with both parties being flexible. “Negotiations can produce gains that alternatives cannot,” The Associated Press reported her as saying, “The fact that Israelis and Palestinians negotiated this pact directly is a rich source of hope for the future.”

More than a decade later, Albright acknowledged her failures in forging peace with Israel, saying that while there are a number of different ways to deal with it, the “way for these two peoples to live together it is on the table, it has been there, and I think it requires the political will.”

At the 2014 forum, where the interviewer and much of the crowd were decided against Israel in the conflict, she said that she was the one to work on designating Hamas as terrorists, as “they meet the definition.”

After a testy question, she noted that while Israel “is in a tough position” trying to defend itself, “innocent Palestinians were being killed,” and “Israel is in danger of losing its moral authority.”

She said there needs to be an effort to bring all sides to the table, however: “There have been rocket fire from Gaza into Israel, and Israel has a right to defend itself.” 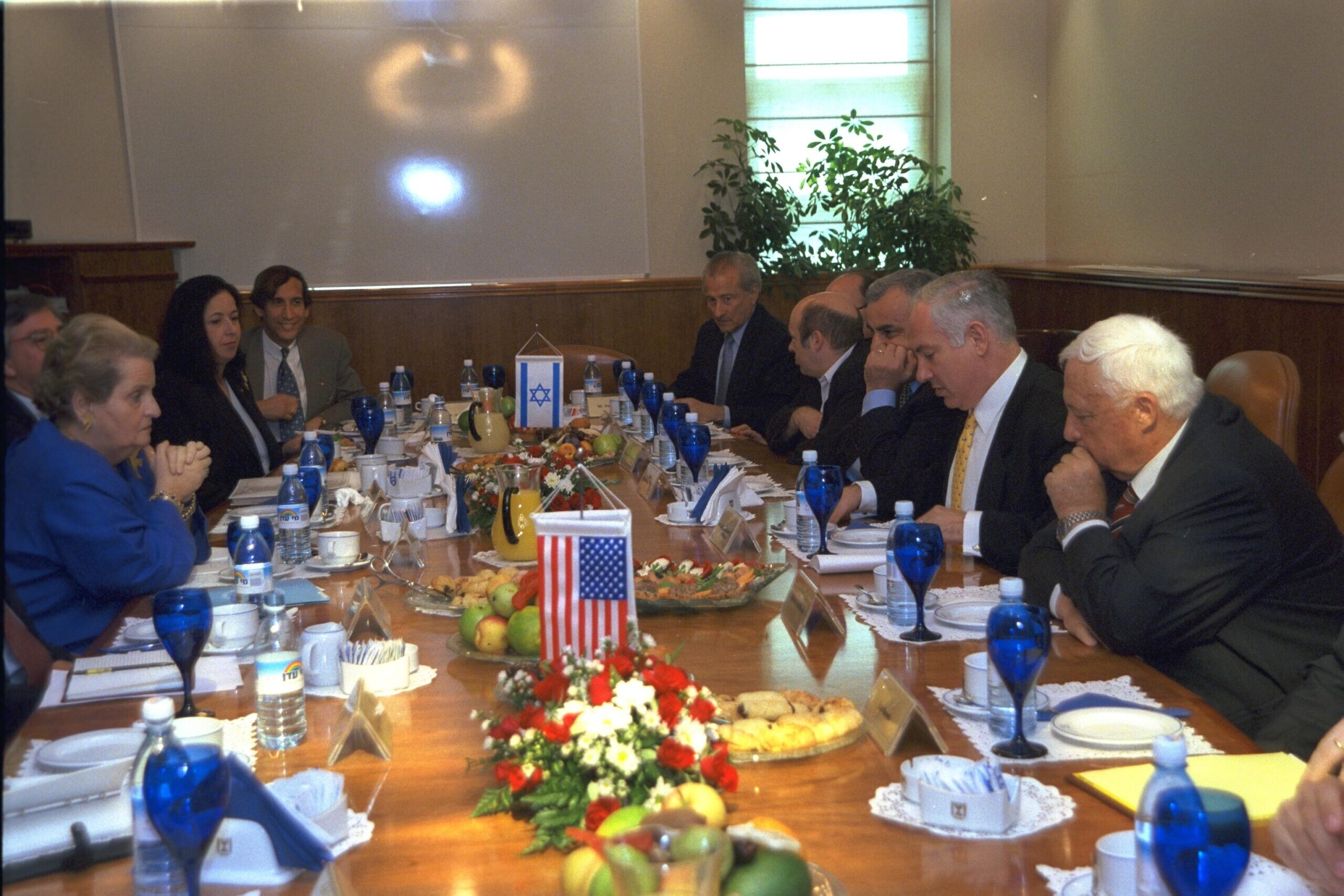 ‘They dealt with the most difficult decision’

Israel was not the only issue Albright had to deal with during the Clinton administration. It was two weeks after her nomination that The Washington Post published an exposé proving that she was born a Jew and that three of her Jewish grandparents were murdered by the Germans.

“I was trying to become the first woman secretary of state,” she said in 2012, after her book, Prague Winter, about her Jewish identity, “and all of a sudden, all this devastating kind of information came.”

Her parents hid her Jewish identity, and so she always thought of herself as a Catholic. “They talked about getting ready for various holidays, for Easter and Christmas,” she recalled at the time, but, in fact, it was a fiction to hide from her the truth.

About that willingness to disregard their being Jewish, she said: “I think my father and mother were the bravest people alive. They dealt with the most difficult decision anyone could make.”

At the time, the news created international headlines, though some didn’t like the fact that she made no effort to seek her background, which many tried to inform her of, including the mayor of her father’s hometown in Bohemia.

“They avoided the difficult decision,” Jeff Jacoby, conservative commentator and columnist for The Boston Globe, wrote at the time about Albright’s parents. “They ran from it. They rejected their Jewishness, betrayed their parents’ memory and spent a lifetime deceiving their daughter.” 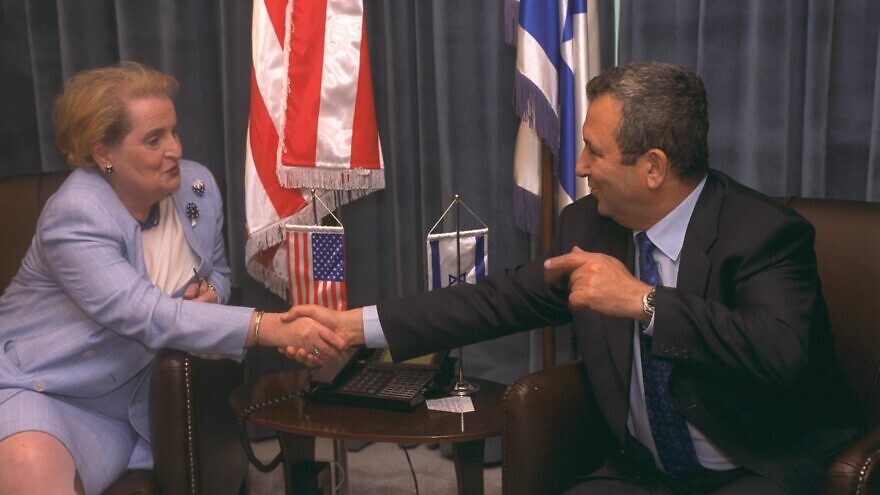 While her daughter is married to a Jew, and the couple is raising her children that way, Albright never did identify as one. She said that she was talking about various Jewish traditions, “the appreciation for history, for family, for humanity, for education.” She went to a Passover seder and later said, “putting all the stories together, what it makes me think is the extent to which people have a need to believe.”

She said that while they may be divided according to religions, “what is interesting is the similarities of the stories, of people yearning for something and being saved and having the hope of having a better life.”

She told the Huffington Post that she would sum up her influences as a person: “I am an American, I am a mother, I am a grandmother, I am a Democrat, I came from Jewish heritage, I was a Roman Catholic, I am a practicing Episcopalian.