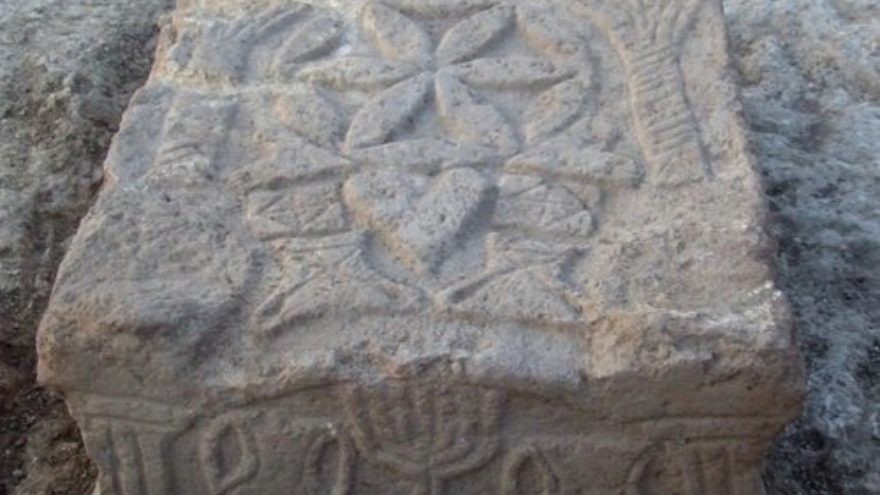 Described as one of the most significant archaeological finds in modern Israel, the Magdala Stone, unearthed in 2009 near the shores of the Sea of Galilee, has been unveiled to the public for first time as part of a joint exhibition on the history of the menorah May 15-July 23 between the Vatican Museums and the Jewish Museum of Rome.

“This is a dream that finally comes to fulfillment,” Father Juan Solana, general director of the Magdala Center, whose work focuses on the stone dubbed a “crossroads of Jewish and Christian history,” told JNS.org. “As a Catholic priest, I feel so proud that the first time it will be displayed at such an exposition with amazing collaboration between Jewish and Catholics in Rome, which is the capital of Catholicism and one of the oldest Jewish communities in the world.”

The discovery of the Magdala Stone in Migdal, Israel, has already reshaped scholarly understanding of 1st century (A.D.) Judaism and early Christianity. The stone was unearthed as part of a routine archaeological examination ahead of the construction of a Catholic retreat center.

Archaeologists from the Israel Antiquities Authority uncovered a well-preserved 1st-century synagogue and a larger town presumed to be the hometown of Mary Magdalene, whom the New Testament describes as one of Jesus Christ’s most faithful followers. Some have even speculated Jesus—who grew up in the Galilee region, according to the Christian Gospels—may have even visited or worshipped in the synagogue.

“It was a true miracle when we found the site,” said Solana, a Mexican priest who now runs the Catholic retreat center and the archaeological park at Magdala. “Most of the ancient towns have been destroyed and rebuilt several times. It is a really extraordinary thing to have survive.”

“We found a lot of parallels between the Herodian (Jewish) Quarter in Jerusalem and Magdala, which drove many people to speculate that one of the priestly families at the time was from Magdala,” he added.

The Magdala Stone, which was found inside the synagogue, offers scholars and archaeologists significant insight into 1st-century Jewish life and the Second Temple era in Jerusalem.

“The stone has the highest number of symbols of the Temple ever found together in one object,” Solana said.

The long side of the stone depicts the side of a building with pillared archways, with a three-dimensional design to create the illusion that it appeared in the Temple. The back of the stone also depicts a pillared structure, with two wheels above a geometric shape, illustrating fire.

“Presumably, the front and sides of the stone carvings represent the Second Temple in Jerusalem, and the back side depicting wheels and fire represents the Holy of Holies,” according to the Magdala Center.

Among all its features, the stone’s menorah depiction has arguably produced the most intense excitement among archaeologists. Scholars and archaeologists contend it is the oldest carved image of the Second Temple’s seven-branched menorah ever found, and the first menorah image to be discovered in a Jewish religious context.

Fittingly, the Magdala Stone and its menorah depiction will take center stage at the exhibition from May-July at the two Rome museums, titled “The Menorah: Worship, History, and Legend.”

According to the exhibition’s organizers, the roughly 130 pieces on display will tell the story of the menorah from antiquity until today as well as its significance in Judaism and to a lesser extent, in Christianity.

“Intertwining history and myth, the story of the menorah is depicted in the exhibition through major works of art from antiquity to the present, including archaeological objects, sculptures and paintings, architectural and decorative artifacts, manuscripts and illuminated books,” exhibition organizers said. “It was in Rome, at the height of the Imperial era, that the menorah became the symbol that most powerfully encapsulates the culture and religion of Judaism.”

The exhibition will also examine theories on the location of the solid gold menorah taken from the Second Temple by the Roman general Titus during his siege on Jerusalem in 70 A.D.

More than 20 museums around the world have loaned their pieces to the exhibit, such as Paris’s Louvre, London’s National Gallery and Vienna’s Albertina Museum.

“It is a great opportunity to bring Catholic and Jewish communities together in the Holy See for an encounter and dialogue about our common history and faith,” said Father Solana, adding, “The message we are trying to deliver from Magdala is this respect of the commonality between our faiths. We have much more things in common than the differences we have.”