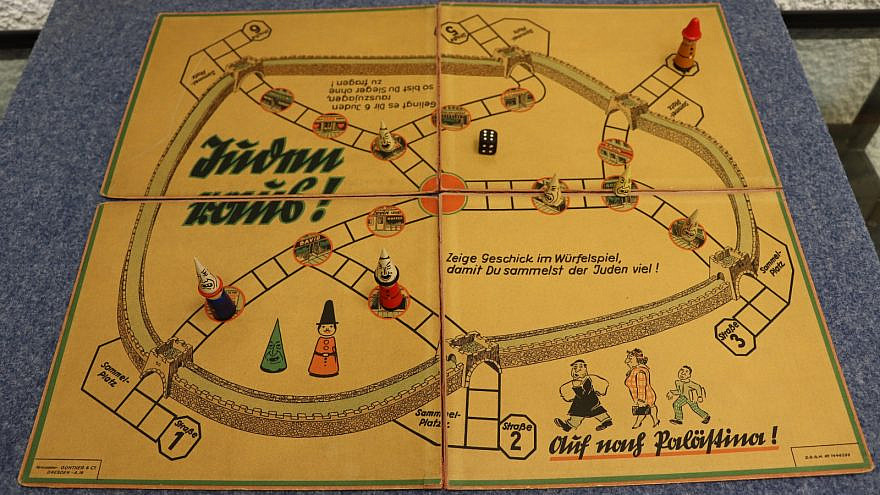 (January 24, 2023 / JNS) A new exhibit at the Wiener Library for the Study of the Nazi Era and the Holocaust at Tel Aviv University features the Nazi-era children’s board game Juden Raus!, or “Jews out!”

The exhibit comes on the eve of International Holocaust Remembrance Day.

“The game should be seen in the overall context of study materials in Nazi schools and preschools, such as a special edition of the ‘Protocols of the Elders of Zion’ for children, or children’s books like the notorious ‘Poisonous Mushroom’ that made children afraid of Jews,” said researchers.

Made in Germany by Guenther and Co. at the end of 1938, it likely followed the events of Kristallnacht, or “Night of Broken Glass,” they added.

Professor (emeritus) José Brunner, academic director and chairman of the Scientific Committee of the Wiener Library, said that the board game resembles another one which was popular in Germany at the time, but with an evil twist. Players are tasked with quickly collecting six “Jew hats” from Jewish residential and commercial areas in the city and bringing them to a roundup spot. The first player to do so wins the game.

One of the captions on the board reads: “Go to Palestine!” (Auf nach Palästina!).

” ‘Jews Out!’ is clearly the outcome of years of blatant incitement and antisemitism which prevailed in German society in the 1930’s—so much so that someone got the idea that driving out the Jews was a suitable theme for a children’s game,” said Brunner.

Ironically, the Nazi establishment disliked the game because it treated systematic hard work as a game of chance.

“They regarded cleansing Germany of its Jews as a methodical, thoroughly considered policy,” added Brunner.

Nor was the game well-received by the German public, and sales were low.