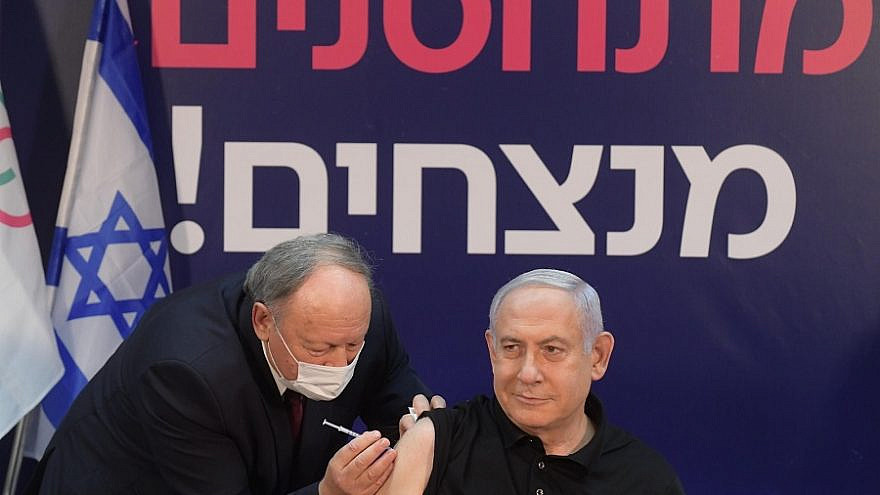 (December 20, 2020 / JNS) Israeli Prime Minister Benjamin Netanyahu on Sunday issued an update on his status after becoming the first Israeli to receive Pfizer’s COVID-19 vaccine a day earlier, saying he felt fine and urging all Israelis to follow suit.

“I feel great; go get vaccinated. We are emerging from the darkness of the coronavirus into a great light,” said the prime minister.

He warned, however, that it wasn’t time for people to let their guard down.

“It is precisely at this time that I ask that everybody be strict about the rules: Distance, hands, masks and avoiding gatherings. The quicker that everyone is vaccinated, the quicker we will return to normalcy. … We need your help; it depends on all of us,” stressed Netanyahu.

Netanyahu and Israeli Health Minister Yuli Edelstein were inoculated at Sheba Medical Center in Ramat Gan on live television, kicking off the country’s vaccination drive in what Netanyahu called “a very great day for the State of Israel.”

After receiving the injection, Netanyahu quipped, paraphrasing astronaut Neil Armstrong’s famous moon-landing quote: “Of that, it was said, one small shot for a man—one giant step for the health of mankind.”

Edelstein said the vaccination drive would “test the resilience of Israeli society,” but expressed confidence that it would pass with flying colors.

“I am certain that all of us will demonstrate responsibility for one another,” he said. “This vaccine is safe; come and get vaccinated.” 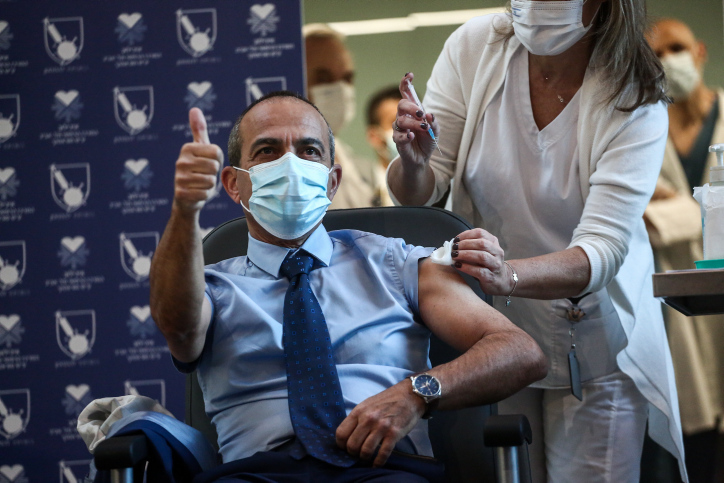 Netanyahu added a special message of gratitude to Pfizer chairman and CEO Albert Bourla, whom he called “a new personal friend of mine, but a huge friend of the State of Israel, and a friend of all humanity.”

“What they [Pfizer] have done is unbelievable. What is even less of a given is that Israel is among the first countries to be vaccinating,” he said.

Israel inked a $237.5 million deal with Pfizer last month for 8 million doses of the vaccine, sufficient to inoculate nearly half the country’s population.

On Dec. 6, the Israeli Health Ministry announced in a joint statement with the Prime Minister’s Office that the country had signed a deal with Moderna to triple the number of vaccines it will purchase from the company in 2021, from 2 million to 6 million doses, sufficient to vaccinate 3 million citizens. Israel is also in the midst of clinical trials for its own vaccine, called BriLife.

Of the 61,962 COVID-19 tests administered on Saturday, 3.1 percent were positive, according to Health Ministry data. There were 1,866 new cases of infection recorded over the past 24 hours, bringing the total number of active cases to 24,077. As of Sunday, there were 447 people listed in serious condition due to the virus, 143 of whom were in critical condition. Since the onset of the pandemic, 3,074 people have died of the disease.