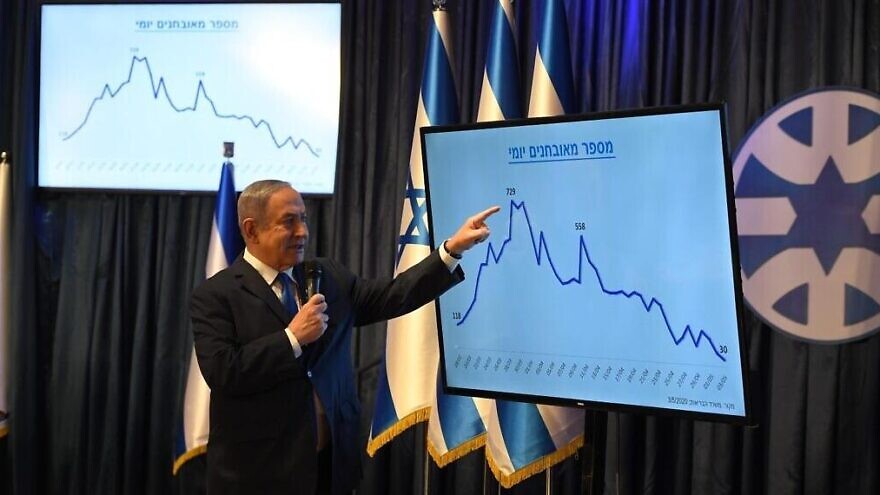 Israeli Prime Minister Benjamin Netanyahu presents a graph showing the drop in new coronavirus cases in the country over the past few weeks at a press conference in Jerusalem, where he announced the easing or lifting of lockdown measures, May 4, 2020. Credit: GPO.
Republish this article
469 WORDS
Spread the word.
Help JNS grow!
Share now:

(May 5, 2020 / JNS) Israeli Prime Minister Benjamin Netanyahu on Monday touted Israel’s “major success” in confronting the coronavirus pandemic, and laid out the government’s plan for a phased reopening of the economy following weeks of lockdowns.

Speaking at a press conference on Monday night, Netanyahu presented a graph illustrating the Jewish state’s low infection rates and death tolls relative to other countries, and said that the result proved that the strict anti-coronavirus measures he began to impose in early March were justified. These measures included the shuttering of schools, the closing of borders and most businesses and stringent quarantine and social-distancing rules.

“We achieved tremendous success in curbing the corona epidemic, and saved the lives of thousands of Israelis,” said Netanyahu. “Now we are gradually returning to a new routine, that will depend on the discipline and responsibility of Israel’s citizens.”

The prime minister also acknowledged the sacrifice of the health-care workers who put themselves at risk to tend to patients and credited the public for having behaved “responsibly” so far.

The following is a partial list of the new regulations Netanyahu spelled out during the press conference:

• All movement restrictions have been lifted.

• Gatherings of immediate family members, including grandparents and grandchildren, are now permitted, with the caveat that social distancing must be maintained, meaning “no hugging, kissing or touching.”

• Outdoor social gatherings of up to 20 people are now permitted in open spaces. Beginning on May 17, this number will increase to 50, and on May 31 to 100. On June 14, the restriction will be removed altogether. Nevertheless, campfires on the eve of the Jewish festival of Lag B’Omer, which falls on May 11, will be prohibited, as will the customary pilgrimage to the grave of Rabbi Shimon bar Yochai in the Upper Galilee village of Meron.

• Weddings now may include up to 50 people, but, Netanyahu advised, only for the chuppah (Jewish wedding canopy) ceremony and accompanying celebration, not dancing.

• Synagogues will remain closed for the time being.

• Restaurants may provide take-away service, but no sit-down meals.

• Malls and outdoor markets will reopen on Thursday.

• Parks, libraries, museums and sports facilities will be reopened fully by mid-June.

• Schools, which opened their doors on Sunday to grades 1-3 and 11-12, are slated to be fully operational by the end of the month, with universities scheduled to follow.

Netanyahu stressed that in the event of a second outbreak of COVID-19—if the number of patients in critical condition exceeds 250, and the infection rate rises above 100 per day—restrictions would be reimposed. He urged the public to continue being vigilant in wearing surgical masks, practicing proper hygiene and maintaining social distancing.

“This is the key to everything,” he said.

As of Tuesday morning, the total number of Israelis diagnosed with the virus was 5,947; the number of newly infected stood at 38; and the death toll was 235.