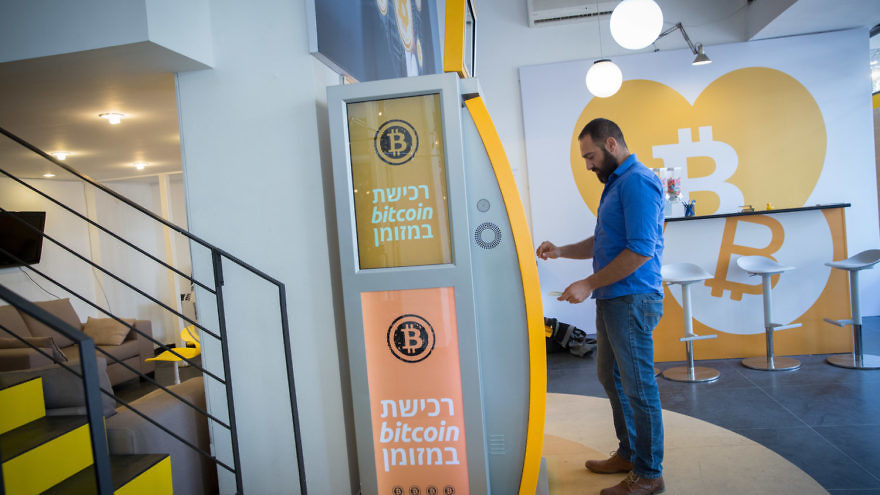 On Nov. 5, 2018, a man uses a bitcoin ATM machine at the Bitcoin Change center on Dizengoff Street in Tel Aviv. The center houses the ATM, as well as a museum on the history of the cryptocurrency. Credit: Miriam Alster/Flash90.
Republish this article
924 WORDS
Spread the word.
Help JNS grow!
Share now:

As digital currencies make historic gains and as the “start-up nation” of Israel emerges as a key player in the blockchain field, Israeli Prime Minister Benjamin Netanyahu has become one of the first world leaders to weigh in on the cryptocurrency phenomenon, placing the country at the center of the global financial technology revolution.

Blockchain—a distributed database where transactions made in digital currencies such as bitcoin are recorded chronologically and publicly—is being used in a variety of global industries as a new way to streamline operations.

Last week, Netanyahu forecasted that the global banking system would become obsolete, and that blockchain and digital currencies like bitcoin could potentially play a central role in upending the current global financial system.

After Netanyahu’s comments surfaced in an online video, his statements went viral on the internet and appeared on some of the top cryptocurrency news outlets and forums.

In the video, Netanyahu, flanked by a group of aides, answered questions put forth by reporters on the subject of digital currency.

“The reason that you don’t sell money is because of the risks, and so you use intermediaries who handle all of the risk, such as preventing theft and so forth, and that is the reason that they exist,” Netanyahu said, responding to a question about whether or not private investment in bitcoin is advisable and the need for such technology.

In his comments, the prime minister highlighted the role that banks currently play as financial mediators, while underscoring that the decentralized technology at the core of digital currencies eliminates the need for formal institutions.

“Will the banks disappear in the future?” a reporter asked.

“The answer is yes,” Netanyahu said confidently. “Will it happen tomorrow? Will it happen because of bitcoin? That is the question, but bitcoin is certainly pushing in that direction.”

Asked if the bitcoin rally will continue, the prime minister asserted, “The truth behind what I just said is what’s propelling bitcoin upwards.” But he cautioned, “Nothing can keep going up at this rate. It’s impossible.”

Netanyahu’s comments came as the price of a single bitcoin hovered in the range of $17,000 per unit, and as of Monday, the digital currency’s value was about $19,000.

Israel has recently been identified as global leader in the emerging blockchain and digital currency sphere, with experts in the field acknowledging that the Jewish state’s cyber capabilities, security proficiency and wealth of entrepreneurial expertise provide an ideal foundation for blockchain technology projects.

“It is overwhelming to watch the ‘start-up nation’ transform into the ‘crypto nation,’” Nimrod May, chief marketing officer of the Swiss-Israeli technology firm Sirin Labs, told JNS. “This process, I believe, is what’s known in evolution as ‘natural selection.’”

Before working at Sirin, May served as the chief marketing officer for Gett, the popular Israeli-developed global rideshare app.

“Blockchain technologies and the promise behind decentralized services is a profound and game-changing technology,” said May. “It represents the combination of deep thinking, value creating and ‘seeing the light’ regarding the future direction of technology.”

“These are all central to the Israeli technology ecosystem, which is why we are only at the beginning of the tidal rise of companies in Israel which are harnessing the potential of the blockchain,” he said.

As Israel continues to punch above its weight in blockchain technology, and as hundreds more Israeli cryptocurrency start-ups are expected to emerge in the coming years, a visit to the Jewish state in September by Ethereum digital currency network founder Vitalik Buterin bolstered the start-up nation’s rising prominence in the field.

Meanwhile, as Israeli financial institutions and regulators grapple with how to approach the rapidly evolving financial technology space, some Israeli banks have resisted the trend, while others see the writing on the wall and have recently expressed interest in creating their own blockchain projects.

Israel’s Bank Hapoalim, the country’s largest bank, does currently transact with digital currency exchanges, but that reportedly might also be subject to change.

In September, Hapoalim proposed creating its own digital banking system based on blockchain technology in a collaboration with Microsoft, in order to improve the customer experience.

The Israeli Diamond Exchange is also exploring the possibility of launching its own digital currency, which will be backed by investments in diamonds purchased at the exchange.

“For the past several years, there have been many attempts to turn diamonds into a viable financial instrument, but none has succeeded,” said Israel Diamond Exchange president Yoram Dvash, reported Israel Hayom.

“We intend to make use of the incredible expertise that Israel’s high-tech industry offers,” he said.