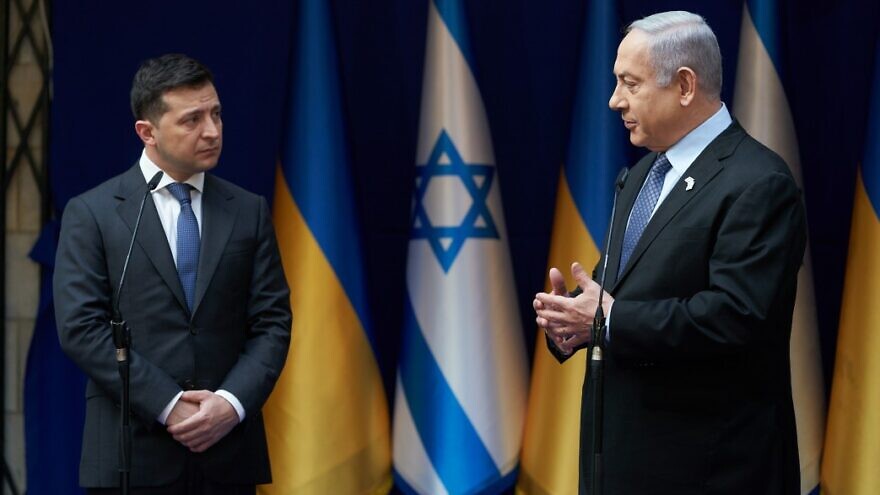 (January 11, 2023 / JNS) While campaigning for re-election, Israeli Prime Minister Benjamin Netanyahu told CNN he would consider arming Ukraine. He has made similar vague statements to the Ukrainian leadership since. While these promises seemed to encourage Ukraine to vote “present” rather than go along with the anti-Israel vote at the United Nations, it is unlikely that Netanyahu will overtly provide anything more to Kyiv than it already does.

Back in the summer, Netanyahu slammed the “change government”—his predecessors—for openly criticizing Russia’s invasion of its western neighbor. He claimed that this  “irresponsible arrogance and amateurism” endangered Israeli military operations in Syria, where Russia has had a strong military foothold since September 2015.

Furthermore, Netanyahu’s allies pointed out how the Kremlin has publicly castigated Israel in the United Nations and elsewhere over its conflict with the Palestinians, while threatening to halt Jewish emigration to Israel. Moscow has also condemned Israel’s sovereignty (“illegal annexation”) in the Golan Heights and its strikes in Syria.

Seeking to calm things down, Israel’s new foreign minister, Eli Cohen, spoke to Russian Foreign Minister Sergei Lavrov and assured him that the new leadership would “talk less” in public about the war. Still, this isn’t likely to make anything easy for the new government.

Lindsey Graham, a pro-Israel Republican senator from South Carolina, slammed the remark. While noting that he appreciated Foreign Minister Cohen’s dedication to strengthening Israel-U.S. ties, the politician—seen as close to Netanyahu—alluded to the fact that Jerusalem would be seen as on the wrong side of history.

Danny Ayalon, who served as Israel’s ambassador to the United States from 2002-06, gave his insight into the political situation under the new government.

“We haven’t heard yet from the administration officially, but Lindsay Graham’s tweet against this position is just a forerunner to what could be expressed officially if Israel won’t take sides,” he told JNS. “Here Israel of course has to consider what is moral and just, but we also have to consider interests, and it is legitimate that we must walk a fine balance. I believe, so far, the Israeli policy is to give all the humanitarian aid we can and express rejection of the invasion.”

Sophie Kobzantsev, a research assistant for Zvi Magen at the Institute for National Security Studies (INSS), focuses on the post-Soviet space. She believes that ultimately, there will be no change in policy towards Ukraine from the new government.

“Relations between Israel and Russia were and remain strategic, and Washington knows and understands it,” said Kobzantsev. “Despite all that has happened to date, cooperation between the two countries [Russia and Israel] continues to exist in Syria,” and this is not likely to change, she added.

Ayalon added that Israel has no interest in provoking “a wounded beast, which is the most dangerous one.” This is with regard to the fact that Russia’s military performance in Ukraine has been lackluster, forcing it to withdraw some forces from Syria. He also believes that while Netanyahu has a close relationship with Russian President Vladimir Putin, Israel has no true leverage to be a mediator between Kyiv and Moscow.

“It will be futile, like Bennett’s attempt,” Ayalon remarked. “I think the only potential mediators are the United States or a summit of many countries. This could allow China to be on Russia’s side and the United States on Ukraine’s, so to speak. If [Netanyahu] gets involved it can damage our interests.”

Kobzantsev agrees regarding Syria, but has a different view of a potential Netanyahu-led mediation effort.

“Russia views Israel as a significant and strategic player in the Middle East,” she told JNS. “In spite of the fact that Russia has strengthened its ties with Israel’s enemies, such as Iran, it remains aware of Israel’s military and political strength in the region,” she said. “Israel is a Western country and an ally of the United States. Russia understands this, but at the same time, Israel does not participate in NATO military aid to Ukraine. Therefore, Russia might be more comfortable talking with Israel. However, we must remember that bringing both  countries to negotiate will happen only if the circumstances allow the actors to make the  necessary concessions for ending hostilities,” she added.

Regarding a quid pro quo with Ukrainian President Volodymyr Zelenskyy—which could see Ukraine vote for pro-Israel United Nations resolutions in exchange for military or intelligence aid—Ayalon believes that Israel voting against Russia in the United Nations is the best way to get Ukraine to vote against the Palestinians there.

Kobzantsev noted that while getting U.N. votes is something Jerusalem desires, it must prioritize its relations with Russia regarding Iran.

Russia’s purchase of Iranian drones and—reportedly—ballistic missiles poses something of a challenge to the Israeli-Russian dynamic, however. Reports have also emerged that Moscow could soon deliver advanced Sukhoi Su-35 fighter jets to Tehran.

While Jerusalem and Washington are concerned about these developments, it remains to be seen whether or not Russia can afford—in a time of dwindling military stocks—to send such supplies to a country it has traditionally seen as a rival in many situations.

For the time being, it is likely that Israel will maintain its 2022 policy towards Ukraine, despite the change in government. However, much remains to be seen concerning U.S. pressure, a weakened Russia, potential future Ukrainian victories and Iranian involvement in the war. In any case, Israeli policymakers must be prepared to have a game plan for all scenarios–that much is clear in these very unclear times.