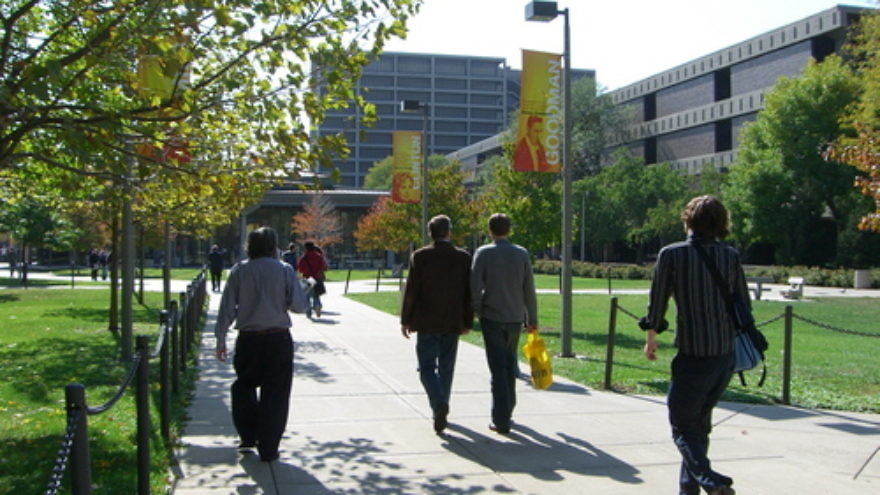 (September 2, 2021 / JNS) Last week, the University of Illinois at Chicago (UIC) welcomed students back to campus. But how welcome can the university’s Jewish population feel sharing a campus with a student group whose members have a long history of horrific anti-Semitic social media posts?

The group, Students for Justice in Palestine, runs a very active chapter at UIC. Even with the COVID-related shutdown of in-person learning in the past academic year, SJP made great headway in its campaign to demonize Jewish students.

A new report released by the anti-hate watchdog group Canary Mission found “disturbing” levels of anti-Semitic activity by this group going as far back as 2015.

The report broke this activity down into three categories: a campaign to attack and malign Chicago’s largest Jewish charity; an effort to bully “Zionists”; and spreading anti-Semitism, support for terrorism and hatred of Israel on social media.

Additionally, the report takes a look at the evolving strategies used by SJP.

The 2020-2021 academic year saw SJP UIC take their attacks into the larger Jewish community of Chicago for the first time. In the hope of appealing to their intersectional allies, the group branded the Jewish United Fund (JUF) of Metropolitan Chicago, Chicago’s Jewish Federation, as “racist,” “Islamophobic, anti-Arab, transphobic and homophobic” and a “hate group.”

Among its other activities, the Federation provides food, refuge, health care, education and emergency assistance to 500,000 Chicago residents of all faiths and funds a network of more than 100 agencies, schools and initiatives.

As documented in Canary Mission’s report, in February 2021, SJP UIC began a two-month campaign to pressure UIC to cut ties with the JUF for sponsoring a Zoom talk by an Israeli professor Gabi Bin Nun of Ben-Gurion University at the university’s School of Public Health.

SJP UIC began its campaign against Bin Nun’s talk with an intensive social media push, providing students with a template to protest the lecture and urging its activists to email the School of Public Health. It followed with ramped-up attacks against both the school and the Federation on social media and circulated an open letter that ultimately demanded that the university terminate all ties with Israeli academic institutions.

Next, the group showed up on Zoom to disrupt the talk, bragging afterward about how they had “persistently asked questions regarding Palestine.” Their pressure campaign continued after the talk with the release of a new “social-media storm demanding the UIC School of Public Health answer for why they work” with the Federation, which they demonized as an “anti-religious group.”

In the end, while SJP was not able to get the talk or the program canceled, they were able to pass a resolution of “solidarity” in UIC’s student government.

While the university was committed to the talk by Bin Nun, it neither took a stand nor made a statement against the resolution.

When asked for a comment about the anti-Semitism being fomented by SJP on its campus, Amalia Pallares, associate chancellor and vice provost for diversity, replied, “We care deeply about all members of our community and are committed to maintaining a campus climate that respects tolerance, compassion, inclusion and diversity. At UIC, we strive to be a place where everyone feels welcome and where all people … can share perspectives and viewpoints to learn from one another.”

Despite the apparent lack of support from the university and opposition from campus groups, Richard Herman, a senior JUF counselor, says JUF is “proudly committed to supporting Israel studies and we continue to hold the program at UIC in high esteem.”

In addition, JUF says it is committed to supporting and protecting Jewish students “wherever they are.”

“We believe deeply in freedom of speech, but we also know that all too often rather than appropriate critical conversations about Israel, we see anti-Semitism and harassment of Zionist on campus,” said Emily Briskman, associate vice president of JUF Campus Affairs and executive director of the Hillels of Illinois.

At the end of last year, SJP UIC initiated a campaign encouraging the intimidation of “Zionists.”

SJP board member Mona Zubi, who started the campaign, tweeted multiple times to encourage others to bully “Zionists,” adding, “it’s my contribution to liberation!”

Zubi, a recent graduate, was employed at the time by UIC as a College Outreach Representative for Prospective Students, a role the university defines as suitable for “exemplary undergraduate student leaders who serve as the university’s official tour guides.”

On Dec. 4, 2020, Zubi tweeted a picture of a child hiding his face as others pointed accusatory fingers at him. The main text accompanying the image read, “Start Zionist Shaming.” Included in the picture were “suggestions” on what words to use to shame Zionists, including, “Zionists have no culture” and “go back to Brooklyn.” The same image was posted later that month to the SJP UIC Instagram account.

During its investigation, Canary Mission uncovered more than 470 social media posts by SJP UIC activists, dating back to 2015, featuring a wide variety of anti-Semitic content, including support for violence against Jews and Israelis, as well as numerous BDS initiatives.

The findings of Canary Mission’s report about the proliferation of anti-Semitism on UIC’s campus mirror those of a recent survey of more than 500 Jewish-affiliated college students and recent alumni on the level of campus anti-Semitism by Alums for Campus Fairness (ACF).

According to the survey, 95 percent of respondents identified anti-Semitism as a problem on U.S. college campuses, with 79 percent having experienced or heard firsthand about another student making offensive or threatening comments.

More than half of the respondents received or heard firsthand offensive or threatening anti-Semitic comments from faculty or university employees and nearly 70 percent say they avoid certain places or events because they are Jewish.

Almost half said that anti-Semitism is getting worse on their campus, and 44 percent said they had experienced or heard firsthand about physical threats against those identifying as Jewish.

Yet Briskman maintains that, at the same time, Jewish campus life is thriving, and it is crucial that Jewish students understand that. However, she says, “Students need to know that there is a real possibility that they will see or hear something anti-Semitic.”

Ezra Balser, a Hillel campus rabbi for Metro Chicago Hillel, also acknowledged the reality of anti-Semitism on campus and the effect it has on Jewish students.

“So much hatred is fueled by a lack of deep knowledge or fear of the unknown,” he said.

However, Balser also said students need to know that professional help is available.

“They are not alone,” he added. “No one should feel like they have to handle something anti-Semitic by themselves.”