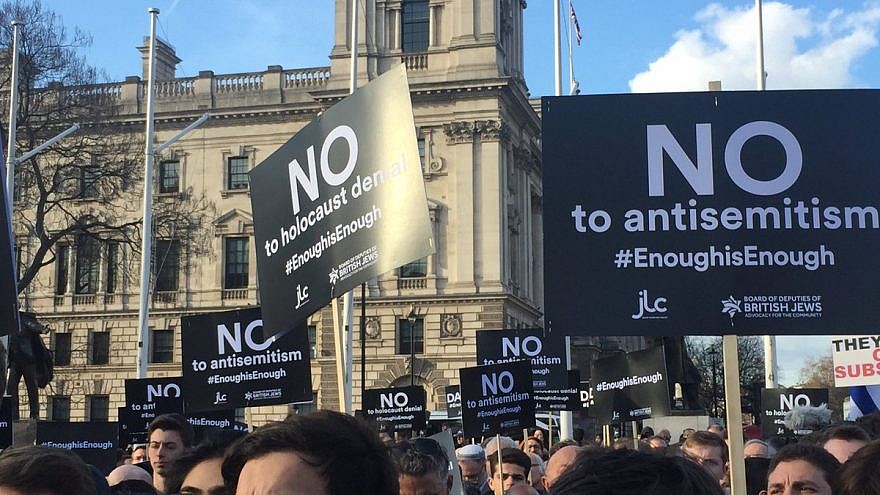 Thousands gather outside of Parliament in London to protest anti-Semitism in the British Labour Party, Sept. 3, 2018. Credit: Labour Against Anti-Semitism via Twitter.
Spread the word.
Help JNS grow!
Share now:

(January 17, 2021 / JNS) Optimism is on the horizon in the United Kingdom in the battle against anti-Semitism, though concerns remain, according to a study released on Sunday.

According to the Campaign Against Antisemitism’s latest Antisemitism Barometer, conducted with King’s College London, shows that 55 percent of British adults do not harbor any anti-Semitic views. The survey consisted of a 12-question Generalized Anti-Semitism Scale.

The most popular anti-Semitic statement was that “Israel treats the Palestinians like the Nazis treated the Jews,” with which 23 percent of British adults agreed. That view is anti-Semitic under the International Definition of Antisemitism adopted by the U.K. Parliament.

The Barometer also includes a separate survey of British Jews designed and analyzed by King’s College’s Daniel Allington and carried out by Campaign Against Antisemitism and Jewish community partners. It revealed that British Jews are showing early signs of recovery from the time Jeremy Corbyn led the U.K. Labour Party between 2015 and 2020, when he stepped down after his party suffered one of its biggest losses in the December 2019 election amid accusations over his party’s handling of anti-Semitism.

‘Sure that the party harbors anti-Semitism’

Despite this recovery, British Jews have been left scarred. Far more are optimistic about their future in the United Kingdom this year, but the proportion who decline to display visible signs of their Jewish identity due to anti-Semitism is at a record high, according to the Barometer.

Additionally, British Jews’ confidence in the criminal justice system is low as a majority believes that the Crown Prosecution Service doesn’t adequately protect British Jews and the courts were also strongly criticized. Only the police received more praise than criticism.

British Jews reserved the greatest opprobrium for politicians. They believe that almost every political party is more tolerant of anti-Semitism than it was last year; the Labour Party is viewed as more than twice as tolerant of anti-Semitism than any other party showing that it still has a great deal of work to do to win the confidence of British Jews.

In the first-ever poll on the subject, an overwhelming majority of British Jews—91 percent—want the government to designate Hamas in its entirety as a terrorist entity. Currently, only Hamas’s so-called military wing is designated as such by the United Kingdom.

Two-thirds of British Jews are deeply concerned by the BBC’s coverage of matters of Jewish concern and 55 percent by its handling of anti-Semitism complaints. Channel 4 also performs poorly with British Jews. Both broadcasters are state-funded.

In a statement, Gideon Falter, chief executive of Campaign Against Antisemitism, said, “Britain’s Jews are back from the brink. This study starkly shows that Labour under Jeremy Corbyn dealt a crushing blow to Jews’ confidence in their very future in this country and that our community is now beginning to recover.”

“But scars remain,” he continued. “Notwithstanding the relief felt by so many, our data shows that nearly half of those who normally wear outwards symbols of their Judaism now feel they have to hide it, and despite nine months of Sir Keir Starmer’s leadership of Labour, British Jews remain just as sure that the party harbors anti-Semites.”

“Though Britain remains one of the best countries in the world in which to live as a Jew, almost a fifth still feel unwelcome in this country,” added Falter. “The departure of Mr. Corbyn is no substitute for the sustained action and leadership to protect the Jews of this country—in politics, universities and social media—for which we have been calling for years.”