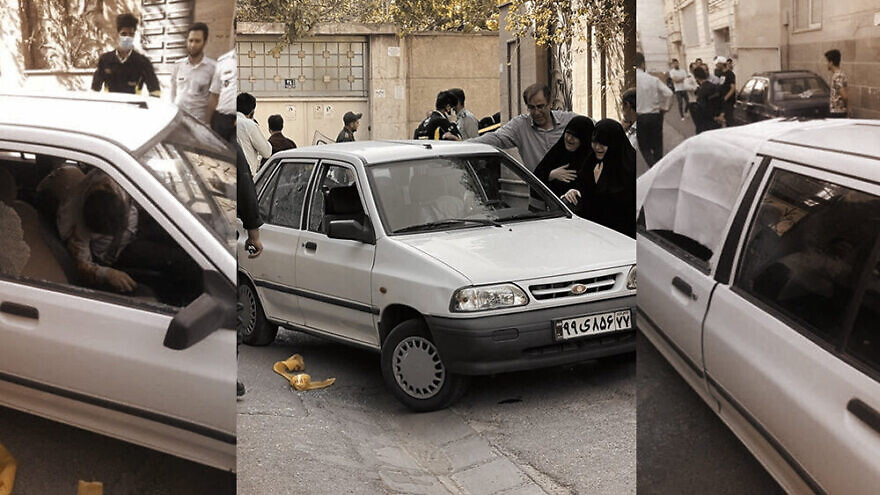 (May 26, 2022 / JNS) Israeli officials were taken by surprise on Wednesday by a report in The New York Times alleging that Israel had informed Washington it was behind the assassination of a top Iranian officer earlier in the week.

An unnamed intelligence official told the Times that the hit was meant as a warning to Iran to halt the operations of Unit 840—a covert group within the Islamic Republic’s infamous black-ops arm, the Quds Force. According to the Israeli government, the IDF, and intelligence officials, Unit 840 is tasked with abductions and assassinations of foreigners around the world, including Israeli civilians and officials.

Iranian Revolutionary Guard Corps officer Col. Hassan Sayyad Khodaei was reportedly shot five times by two men on a motorcycle in the heart of Tehran on Sunday. He was said to be involved in planning attacks against Israel, although according to other reports he was a logistics expert with a crucial role in the transportation of drone and missile technology to fighters in Syria and the Iran-backed Hezbollah terrorist group in Lebanon.

Israeli officials were taken aback by the leak, which is considered quite rare within the context of the countries’ intimate strategic relationship, Channel 12 reported. Israeli officials were “unsure what motivated the Americans to leak the information” and were trying to understand the ramifications, according to report. The New York Times did not specify the nationality of the intelligence official.

Israel rarely claims responsibility for any operation on foreign soil, as this makes it easier for the other party to demonstrate restraint. Israeli officials were reportedly concerned that the leak will augment Iran’s desire to retaliate.

In the immediate aftermath of the assassination, the IRGC denounced it as a “criminal terrorist act” and later announced they had nabbed a “network of thugs linked with the Zionist regime of Israel’s intelligence service.”

Citing an unnamed European security official, Iran International reported that Khodaei was involved in several terrorist plots against Israelis in Asia, Europe and Africa, including the Feb. 13, 2012 attack targeting an Israeli diplomat in New Delhi, India, in which a diplomat’s wife was wounded.

He was also reportedly involved in a series of botched bombings aimed at killing Israeli envoys in Tbilisi, Georgia, and several Central Asian countries, and had masterminded the 2012 Bangkok bombings, which left five people wounded.

“We will make the enemy regret this and none of the enemy’s evil actions will go unanswered,” IRGC commander Gen. Hossein Salami said in a speech on Monday. A member of Iran’s National Security Council, Majid Mirahmadi, said the killing was “definitely the work of Israel,” and warned that harsh revenge would follow, according to Iranian media.

On Tuesday, Prime Minister Naftali Bennett commended U.S. President Joe Biden’s administration for its decision to keep the IRGC on the list of Foreign Terrorist Organizations.

“President Biden is a true friend of Israel who is committed to its strength and security. Over the past few months, we made our stance clear—the IRGC is the world’s largest terror organization, involved in planning and carrying out deadly acts of terror and destabilizing the Middle East,” the premier said in a statement.

According to a report by Politico, Biden has “finalized his decision to keep Iran’s Islamic Revolutionary Guard Corps on a terrorist blacklist, according to a senior Western official, further complicating international efforts to restore the 2015 Iran nuclear deal.”