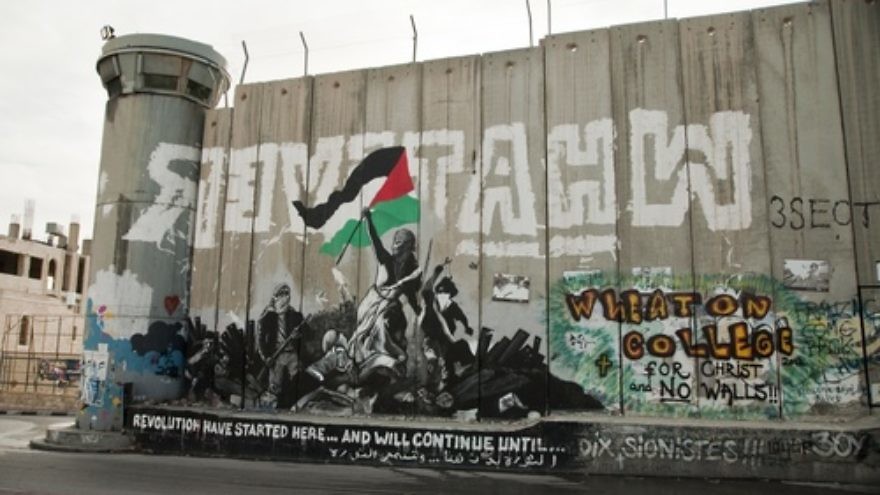 Anti-Israel graffiti on the Israeli security wall in Bethlehem. The wall comes under heavy criticism from those who claim it cuts off Palestinian communities from one another. Credit: Garry Walsh via Wikimedia Commons.
Republish this article
1130 WORDS
Spread the word.
Help JNS grow!
Share now:

The U.S., U.K., and Dutch governments are helping to fund a conference called “Christ at the Checkpoint,” which attempts to sway Evangelical Christian opinion against Israel and whose themes have anti-Semitic undertones, according to a new report issued by the Jerusalem-based watchdog group NGO Monitor.

The report titled “Christ at the Checkpoint: How the U.S., U.K. and Dutch Governments Enable Religious Strife and Foment Mideast Conflict,” first obtained by JNS.org, examines how the American and European governments are directly and indirectly funding the conference.

“Direct and indirect funding to the organizers of Christ at the Checkpoint is mystifying and deeply concerning to us,” said Yitzhak Santis, Chief Programs Officer and “BDS in the Pews” Project Director at NGO Monitor.

Christ at the Checkpoint (CATC) is a biennial event held in Bethlehem, organized by the Bethlehem Bible College and the Holy Land Trust. First launched in 2010, the conference was again held in 2012, and another conference is being held from March 10-14, 2014. The stated goal of CATC is “To challenge Evangelicals to take responsibility to help resolve the conflicts in Israel-Palestine by engaging with the teaching of Jesus on the Kingdom of God,” according to the conference website.

The Bethlehem Bible College and Holy Land Trust, and by extension the CATC conference, has drawn significant criticism over its anti-Semitic and anti-Israel themes.

Dr. Jack Sara, president of the Bethlehem Bible College, said that the conference goal is to help Evangelical Christians understand the Palestinian narrative.

But according to NGO Monitor, the CATC “seeks to advance the Palestinian nationalist agenda within Evangelical Christian churches, while simultaneously reviving theological anti-Semitic themes such as replacement theology.”

Specifically, CATC includes a heavy emphasis on replacement theology, which teaches that the Christian church has replaced Israel or the Jewish people regarding the plan, purpose, and promises of God. Adherents of the theology believe that the Jewish are no longer God’s “chosen people.” While once a popular belief among Christians, replacement theology has been thoroughly discredited within the modern Evangelical movement by leaders such as Christians United For Israel (CUFI) founder Pastor John Hagee.

The speakers at CATC represent “a who’s who of the new, anti-Israel Christian narrative,” said David Brog, executive director of CUFI.

“In the guise of love, they continue a dangerously one-sided propaganda campaign against Israel,” Brog added. “You can’t honestly criticize Israel’s security barrier without discussing the suicide bombings that it stopped. You can’t honestly criticize Israel’s presence in the West Bank without noting that it would have ended long ago had the Palestinian leadership said ‘yes’ to generous peace offers in 2000 and 2008. But at this particular checkpoint, context and nuance are confiscated at the front door.”

At the same, American and European taxpayer money has been given directly to the Holy Land Trust, a Palestinian non-profit organization that claims to develop “non-violent approaches that aim to end the Israeli occupation.”

“In recent years, the sponsors have received funding from the governments of the U.S., the U.K., and the Netherlands,” NGO Monitor’s Santis told JNS.org.

Two Dutch charities that receive subsidies and grants from the Dutch government—Cordaid (Catholic Organization for Relief and Development) and Kerk in Actie—also have ties to the Holy Land Trust.

In addition, the NGO Monitor report highlighted several non-government funds that are supporting the CATC. One of the biggest donors is the United Methodist Church-affiliated General Board of Global Ministries, which provided $75,000 in 2013.

The United Methodist Church, America’s largest mainline Protestant denomination, voted for two proposals to divest from companies that do business with Israel at its quadrennial convention in Tampa, Florida in May 2012. In contrast with the vast majority of Evangelical Christians, mainline Protestant Churches such as the United Methodist Church and the Presbyterian Church USA, which recently issued the anti-Israel study guide “Zionism Unsettled” and may vote to support the Boycott, Divestment and Sanctions (BDS) movement against Israel at its biennial General Assembly in Detroit this June, have been some of Israel’s harshest critics.

According to the CATC conference manifesto, the gathering is promoting a Christian theme of “reconciliation” that calls on Evangelicals to “reclaim the prophetic role in bringing peace, justice, and reconciliation in Palestine and Israel.”

Additionally, Sami Awad, a Palestinian Christian and executive director of the Holy Land Trust, has made several controversial statements about Israel, according to NGO Monitor. In 2007, despite the Holy Land Trust’s stated commitment to non-violence, Awad said that non-violent demonstrations are “not a substitute for the armed struggle.”

Conference participants will also be able to attend several field trips organized by the Holy Land Trust that are intended to “give the participants a better understanding on how the conflict affects the daily lives of Palestinians.”

These trips include visits to the “segregation wall” in Bethlehem, a tour of Hebron that includes a visit to “Israeli settler strongholds,” a visit to a local Palestinian family “living under siege,” and a trip to “East Jerusalem” that explores the controversial neighborhood of Sheikh Jarrah.

“CATC does not promote peace and reconciliation, despite their claims,” Santis said. “Speakers at past conferences have made bigoted statements against Jews and Judaism, spouting replacement theology and even a racial theory of Jewish origins.”

“Taxpayers should not be enabling such an inflammatory program,” he said.