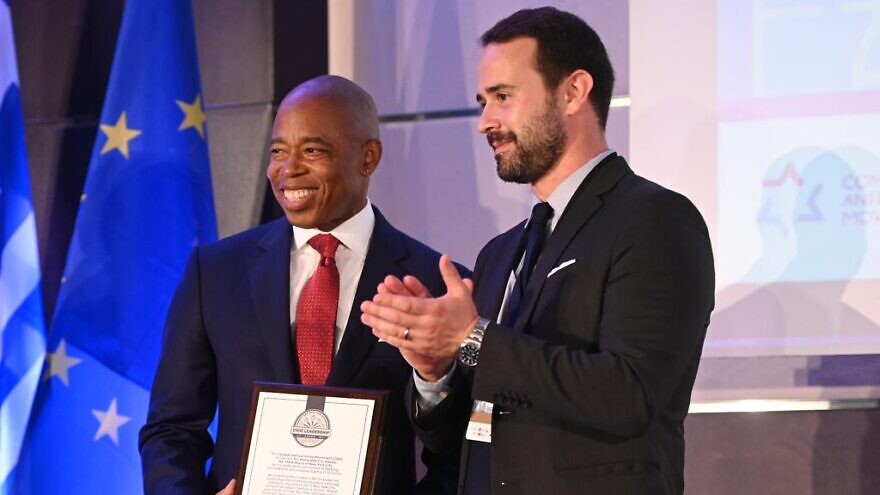 (December 1, 2022 / JNS) New York City Mayor Eric Adams on Wednesday denounced the increase in global Jew-hatred in an address at the 2022 Mayors Summit Against Antisemitism in Athens, Greece.

“The temperature is increasing ever so slightly that we have allowed [antisemitism] to normalize in every part of our lives. We have become accustomed to it; it has become popular,” said Adams at the event, which was attended by over 50 mayors and municipal leaders from across the globe including the cities of Paris, Vienna, Albuquerque, Richmond, and Ft. Lauderdale.

“Social media is the flames that continue to fuel the hatred that you are seeing,” Adams continued. “Those who are perpetrating hate should not have five million followers on social media when those who stand up for what is right only have 100,000 followers. They have organized to a level that is so dangerous at this time,” he said.

“At a time when antisemitism is growing worldwide, it is our moral duty to turn memory daily into action, to cultivate historical knowledge, to reflect on the causes that gave birth to Nazism, racism, antisemitism and all kinds of racial, religious, and social prejudices,” she said.

The summit was held in partnership with the Combat Antisemitism Movement, Center for Jewish Impact and Jewish Federations of North America.

“This conference is unprecedented and vital. It is unprecedented, because we have never had so many local and municipal leaders in one place, sharing best practices and learning from each other on how to fight Jew-hatred,” said CEO of CAM Sacha Roytman Dratwa. “Antisemitism is increasing all over the world, so it is vital that the authorities closest to the ground are on the frontlines of combating antisemitism and fostering greater coexistence and tolerance between peoples and communities.”

Roytman Dratwa presented Adams with the CAM Civic Leadership Award for his dedicated commitment to fighting antisemitism and religious bigotry of all forms.