(February 22, 2021 / JNS) A comedian telling a bad joke that hurts someone’s feelings isn’t news. Or at least it didn’t use to be. But when the bad joke validates a lie that is fueling the latest anti-Semitic blood libel, it may actually be far more important than even many of those who are always on guard against anti-Israel bias think. That’s especially true if it is broadcast on one of the late-night comedy programs that have increasingly played an outsize role in shaping American public opinion.

Those who saw the most recent episode of “Saturday Night Live” heard comedian, chief writer and “Weekend Update” co-anchor Michael Che’s casual claim that Israel’s record vaccination rate has already covered half its population. The butt of the “joke” was when Che quipped: “The Jewish half.” The comment provoked immediate outrage from pro-Israel groups and viewers alike—and not all of them Jewish. Yet predictably, Che’s jibe provoked as much left-wing support for the false assertion cloaked in a humorous review of the news as it did anger. That speaks volumes about the pervasive nature of the anti-Semitic myths spread by Israel’s enemies about its successful effort to vaccinate its citizens—all of its citizens.

The most important thing to understand about this kerfuffle is that the argument isn’t about defining what is or isn’t funny or, as one celebrity rabbi mistakenly insisted, the need for more outreach or an effort to better educate an African-American comedy star who is probably as well-versed in the news of the day as most pro-Israel activists. Nor is this the moment for wise guy kibitzers to tell the Jewish community to chill out, and understand it was just a joke and not be taken so seriously.

Instead, it’s time to realize that the ground on which the battle to combat misinformation about the Middle East conflict and anti-Semitism is fought has shifted. It’s a mistake to dismiss the content of television satire as mere pop-culture fluff. What is said on “SNL” or any of the other late-night comedy shows may be as important as the bad reporting in mainstream news outlets on which the writers of these satirical skits base their calumnies.

In recent years, as the #MeToo movement gained ground, along with the Black Lives Matter movement and a host of other left-wing causes that became unquestioned orthodoxy in the pop-culture world, comedy has ceased being a genre where one could be an equal opportunity offender. It started with stand-up comedians no longer feeling welcome on college campuses. This spirit of intolerance was once confined to universities but has now spread to the rest of society, including much of the news media—where woke mobs of reporters bully their editors over decisions to give conservatives a voice at outlets like The New York Times and Politico, especially to cultural venues. 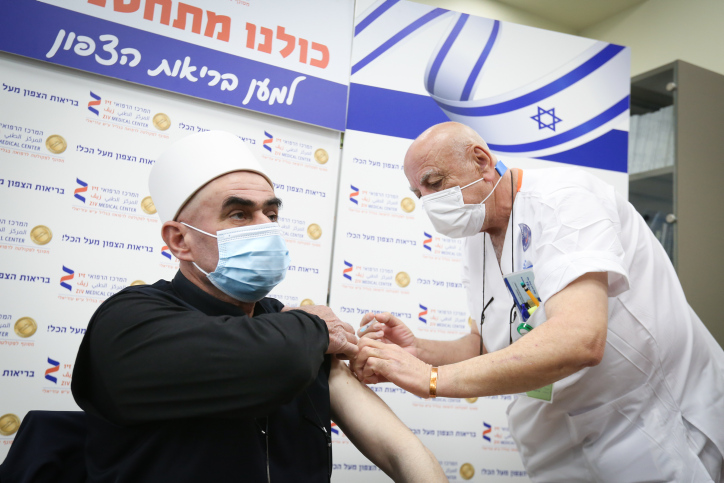 Heads of different religious communities in Israel get a COVID-19 vaccine at the Ziv Hospital in Tzfat, Dec. 24, 2020. Photo by David Cohen/Flash90.

In the entertainment world, anyone who transgresses whatever the left is currently defining as politically incorrect is in trouble. That’s a loosely defined term that includes what can be fairly or unfairly construed as racist, sexist, transphobic, and now, increasingly can also simply mean having supported former President Donald Trump or raised questions about election fraud. The result is nothing less than a revival of the old Hollywood “blacklist,” with the only difference being that the ones being shunned are now conservatives rather than leftists and that liberal civil libertarians who once denounced such practices now cheer them since the victims are now their foes as opposed to their friends.

One of the most reliable indicators of what can or cannot be said is late-night comedy, which has become increasingly politicized in the last two decades. This is especially important because these programs—whether it’s episodes of “SNL” or Comedy Central’s “The Daily Show” and HBO’s “Last Week Tonight With John Oliver” or the humorless diatribes that pass for comedy on “The Late Show With Stephen Colbert” (and his less overtly political but still reliably liberal competitors hosted by Jimmy Kimmel and Jimmy Fallon)—aren’t just operating in lockstep when it comes to politics. They also have tremendous influence, especially on younger viewers, who are less likely to read or watch actual news than their elders.

The Pew Research Institute has conducted surveys pointing out that many viewers rely on “The Daily Show” to learn about current events. Another poll showed that its audience actually considers Colbert’s show to be a “trusted source of political news.”

Just as important, the “Weekend Update” segment and political skits on “SNL” that regularly pillory anyone on the right, especially but not solely attacking Trump while treating liberal icons like Barack Obama with kid gloves, are now must-see TV for anyone wanting to be in the know about contemporary politics. Some of the one-liners and satirical segments are hysterical. Some are lame. But either way, they matter.

The humor on these programs almost never challenges the prevailing liberal orthodoxy of the moment, although such political skits go back all the way to the mid-1970s when the show started. That has made them a modern political catechism for young audiences seeking to know what is or isn’t acceptable to think or say about the issues of the day. As politics came to dominate culture in the Trump era and as leftist orthodoxies like BLM have become pervasive, that is more the case than ever.

Thus when Che noted that half of Israel’s population had become vaccinated—“the Jewish half”—it’s not just a matter of an unfunny and false claim. A year ago, he made a tasteless and possibly anti-Semitic joke about the winner of a “Miss Hitler contest” being “Miss Israel,” while also implying that pro-Israel Fox News host Laura Ingraham was a Nazi. But this past week, he was repeating libelous assertions about Israel denying the coronavirus vaccine not only to Arabs—an untruth that has been aired on CNN by correspondent Christiane Amanpour and also spread by BDS supporter Rep. Rashida Tlaib (D-Mich.)—but to Christians and other minorities who live in the country as well. All of which is false. In fact, many of them have already been vaccinated, to which the Israeli Ministry of Health can attest.

Che’s endorsement of the smear prompted CAMERA, the leading anti-Israel media bias watchdog, to send a letter to NBC urging both it “and SNL to apologize for the blatant anti-Semitic smear, and to make clear that Israel is providing equal access to the coronavirus vaccine for its entire population, Jews and non-Jews alike.” The American Jewish Committee similarly demanded an apology. The Zionist Organization of America went further and demanded that “SNL” fire the writer of the line. They and others correctly pointed out that the claim that Israel should be vaccinating Arabs in the West Bank and the Gaza Strip is also false. The Oslo Accords gave responsibility for health matters in the areas to the autonomous government of the Palestinian Authority, which oversees the West Bank while Hamas controls Gaza.

But this problem should transcend those put forward by the usual activist suspects.

Among pop-culture influencers, Israel has become an acceptable target for the sort of unfair skewering that is otherwise reserved for conservative political figures and groups, even if it means treating an anti-Semitic blood libel as credible. Given that anti-Semitic attacks on Israel are embraced by intersectional ideology and critical race theory that are the foundations of the BLM movement, it’s hardly surprising that venues that support them will eventually turn on the Jewish state.

With pop culture becoming a political battlefield, comedy shows can’t be given a pass for spreading dangerous lies. Claiming that Jews are letting Arabs die when they should be saved isn’t a joke. Not only does it paint the Jews as oppressors, but it’s also classic anti-Semitism. The fact that it is uttered by someone that a lot of people like and look to for entertainment makes it even more dangerous than when it comes from biased news sources.

The proper response requires not just an apology, but a realization on the part of those who run these shows that the applause and laughter their political virtue-signaling generates shouldn’t be mistaken for legitimacy.