(June 2, 2021 / JNS) Opinion pieces in the mainstream media on the anti-Semitic attacks in U.S. cities in the wake of the most recent outbreak of the Hamas-Israel conflict claim that such a “street-level response to geopolitical events” (Gerard Baker, The Wall Street Journal, May 24) was common in Europe but had no precedent here. Walter Russell Mead, also in The Wall Street Journal (May 24), attributed “past anti-Jewish violence in America” only to “a deranged individual,” “an outgrowth of communal tensions” or “an attack on a particular Jewish individual such as the 1915 lynching of Leo Frank.” He added, “Last week brought something different.”

Similarly, Michelle Goldberg in The New York Times (May 25) labeled the “flagrant public assaults on Jews” as “new.” Even Jonathan Greenblatt, national director and CEO of the Anti-Defamation League, in conversation with Goldberg, characterized “the brazenness and the boldness” of the attacks as unique. He appears stunned that people are afraid to wear items that will identify them as Jews “in public.”

In fact, this is not new. Fueled by the Nazis’ ascent to power and inspired by the virulently anti-Semitic radio priest Father Charles Coughlin, marauding gangs of Irish Americans in the 1930s through World War II routinely and openly assaulted Jews in New York, Boston and Philadelphia. Just as in Los Angeles last month—where anti-Semites asked diners “Who’s Jewish?”—attackers in earlier times went on what they called “Jew hunts,” challenging victims by asking, “Are you Jewish?” Wielding lead pipes, bricks, brass knuckles and knives, they savagely beat and slashed their prey, taunting them, “The Jews killed Christ; we’re going to kill you!” Terrorizing entire neighborhoods, they promised, “There’ll be no more Jews on Jew Hill Avenue (Blue Hill Avenue in Boston) when this war is over.”

In Florida last month, men shouting “Free Palestine!” screamed, “We’re going to rape your daughter! We’re going to rape your wife!” In the earlier period, the anti-Semites actually targeted Jewish girls, tearing their clothes off or sexually battering them. Meetings of Jewish Girl Scouts, as well as Cub Scouts and other social clubs, were widely canceled as Jewish parents dared not allow their children to go out in afternoons or evenings. And much like the recent defacing of synagogues, anti-Semites desecrated nearly every synagogue in Washington Heights in Upper Manhattan, hurling prayer books into toilets and smearing “pornographic hateful descriptions” of Jews on the walls. Seeking out Jewish cemeteries across Brooklyn, Queens and Long Island, vandals overturned gravestones and painted swastikas on them, much as they were doing all over Axis-occupied Europe. Large gangs smashed synagogue windows with the rallying cry, “Let’s kill the Jews!” 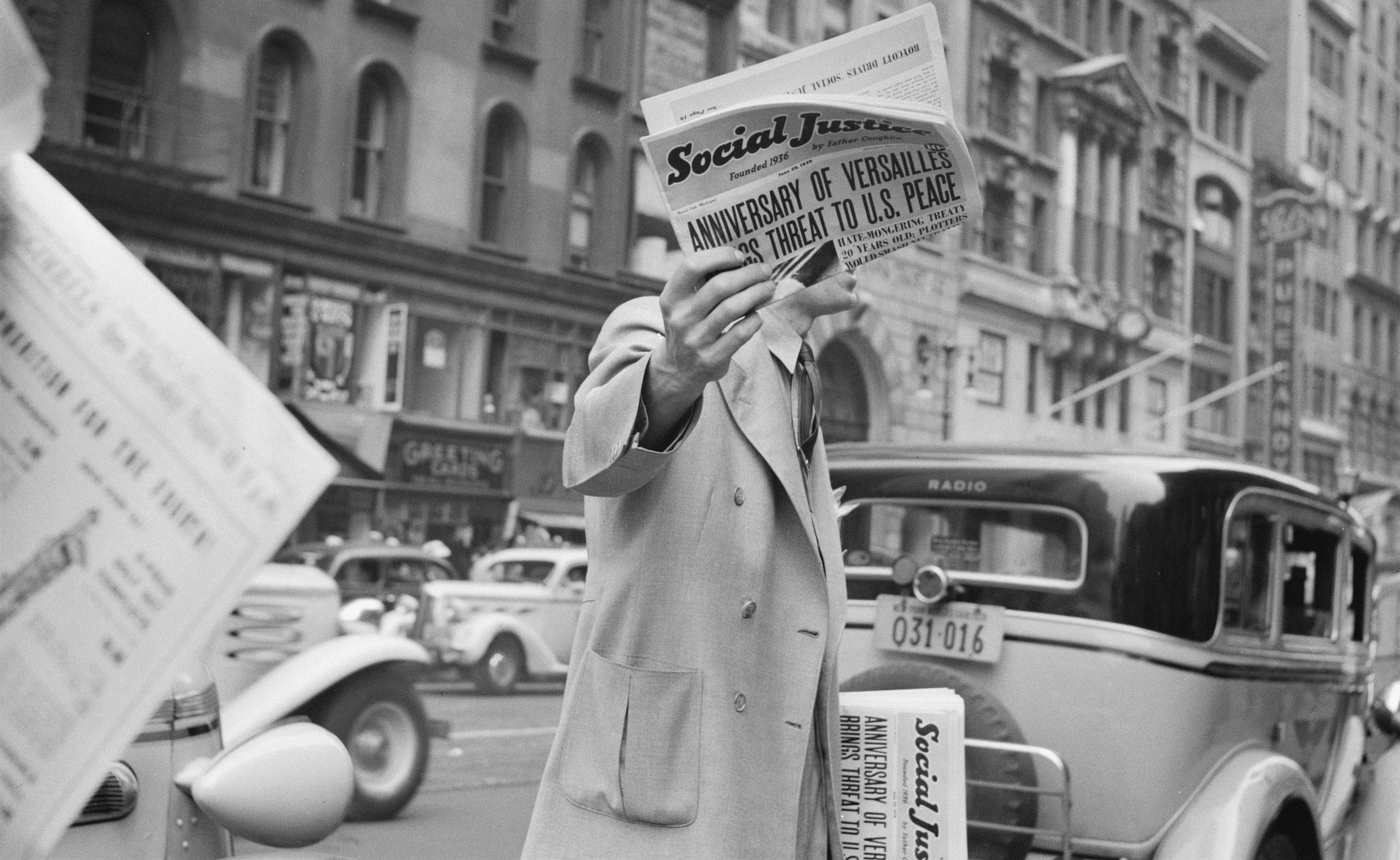 Today’s anti-Semitic promoters of boycotts of Israel call for the denial of U.S. military aid to the “apartheid, colonial settler” Jewish state, a libelous image they share with attackers in the street. Similarly, Coughlin’s movement—the Christian Front—waged campaigns to boycott Jewish businesses and to prevent the United States from providing military equipment to Britain prior to America’s entry into the war. While last year marauders used the pretext of a fight for social justice to burn and “loot” Jewish stores in the Fairfax district of Los Angeles, in the 1930s and 1940s, anti-Semitic thugs needed no excuse as they damaged, destroyed and robbed Jewish shops. The police forces, heavily Irish American with many allegedly members of the Christian Front, did nothing to stop them.

Just as those who attack Jews in American cities today, along with their apologists, repeat Hamas’s anti-Semitic libels about the bloodthirsty Jewish state that targets innocent civilians, those who terrorized American Jews in the 1930s and ’40s, along with the Christian Front, endlessly promoted Nazi propaganda. They reported on the Nazis’ great “respect for the Church” and explained that the British House of Commons was “a Yiddish assembly” that allowed Jews to deprive Arabs in Palestine of any rights. This was in 1938, the year before Britain issued the infamous White Paper that severely limited Jewish immigration into Palestine, thereby sealing the fate of the millions of Jews trapped in Europe.

Mainstream U.S. newspapers ignored the attacks on American Jews until 1943 when Arnold Beichman in the New York tabloid PM provided a blistering, well-documented account of the “organized campaign of terrorism” in Boston. The next day, the governor of Massachusetts, Leverett Saltonstall, spotting Beichman at a press conference, told him: “That is a stinking article and you can get the hell out of this office.” Then, as now, politicians were wary of denouncing the anti-Semites.

Stephen H. Norwood and Eunice G. Pollack are co-authors of “White Devils, Satanic Jews: The Nation of Islam From Fard to Farrakhan” in Modern Judaism (May 2020), as well as co-editors of the prize-winning two-volume “Encyclopedia of American Jewish History.”