(February 14, 2019 / JNS) There was a time when many Jews were disgusted with the American Civil Liberties Union’s belief that all forms of non-violent dissent deserved a vigorous defense. In 1977, the country was outraged when the American Nazi Party sought to hold a march in Skokie, Ill. The Nazis chose Skokie because of its large Jewish community, replete with Holocaust survivors. But while most Jews sought to prevent the Nazis from carrying out this provocation, the American Civil Liberties Union stuck to its First Amendment principles and defended the Nazis’ right to march in court. They ultimately prevailed, even though the hate group eventually carried out their publicity stunt in Chicago.

The decision cost the ACLU a lot of Jewish support. But it continued to thrive in its niche as defenders of the rights of the unpopular to exercise their rights. But more than 40 years after that controversy, the ACLU decided to change its policies from one of First Amendment absolutism. Last year, The Wall Street Journal reported that the group had decided to shift to a stance in which its case selection guidelines now call for it to deploy its legal expertise only on behalf of those individuals or groups with positions that the ACLU’s liberal board supports. 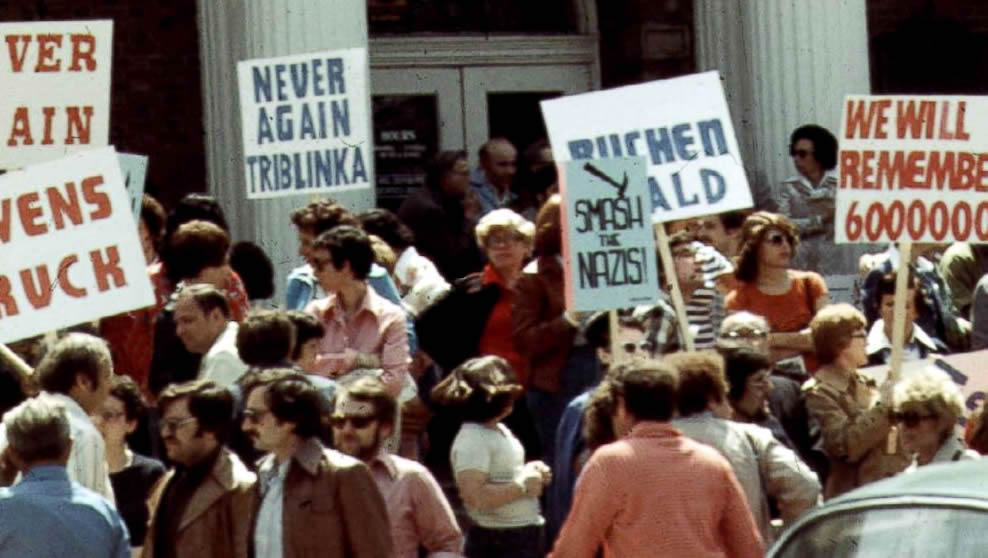 Protesters, many of them Jewish, gather for an anti-Nazi demonstration in front of the Skokie village hall, May 1977. Credit: Illinois Holocaust Museum and Education Center.

Why did the ACLU throw out its guiding principles?

In August 2017, a neo-Nazi/Ku Klux Klan torchlight march through Charlottesville, Va., stunned and horrified the nation. The following day, a clash between the Nazis and those who protested their presence turned lethal when one of the counter-demonstrators, 32-year-old Heather Heyer, was killed in a car-ramming attack. And when U.S. President Donald Trump chose to conflate opposition to removing Confederate statues (the issue that had brought out the Nazis and their opponents) with support for hate, the ACLU felt it had to choose between its desire to be a rallying point for the “resistance” to the president and its principles. They chose the former, and that meant it wouldn’t be repeating its Skokie stand in the future.

It’s possible to draw line between support of the First Amendment and support of the right of extremists to endanger the public by engaging in speech that is the moral equivalent of crying “fire” in a crowded theater (as Supreme Court Justice Oliver Wendell Holmes once wrote).

But now that the ACLU is no longer prepared to defend all sorts of dissidents, the choices it makes as to which causes it deems worthy of their efforts are highly instructive. And in the last month, the ACLU has signaled that its priorities are to defend the right to engage in discriminatory boycotts against Israel, as well as support of expressions of anti-Semitism.

That’s the obvious conclusion after the ACLU pulled out all the stops in its efforts to defeat a bill that would support the rights of states to ban entities or individuals that engage in boycotts of Israel and Israeli citizens from doing business with the government.

The ACLU claims this is a defense of the First Amendment. The Constitution protects the right of those who advocate for Israel’s destructions or for boycotts of it to express their opinions. But there is no constitutional right to engage in commercial conduct that discriminates against a class of persons or those associated with the only Jewish state on the planet. To the contrary, the states and the federal government are on firm constitutional ground to deem such discrimination illegal, as is the case when it comes to similar actions directed at African-Americans or other ethnic or religious groups. 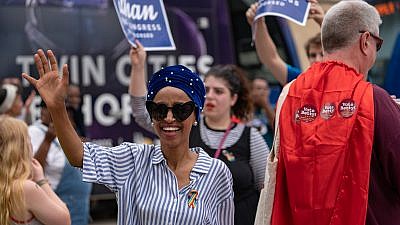 That the ACLU would weigh in on behalf of BDS is deeply troubling. BDS is a movement steeped in anti-Semitism, as its supporters’ statements and actions have repeatedly proved. The struggle against it has nothing to do with free speech—and everything to do with anti-Semitism—since it is a concept based on the notion that Israel, alone of all countries in the world, deserves to be eliminated.

The U.S. Senate passed the bill, sponsored by Sen. Marco Rubio (R-Fla.), by a resounding 77-23 margin. But the opposition of the 22 Democrats and one Republican (Kentucky Sen. Rand Paul, a devout libertarian but also a longtime critic of Israel) bodes ill for its fate in a House of Representatives controlled by the Democrats. The fact that six of the seven Senate Democrats running for president (Corey Booker, Sherrod Brown, Kirsten Gillibrand, Kamala Harris, Bernie Sanders and Elizabeth Warren) voted against the anti-BDS bill and only one (Amy Klobuchar) in favor showed that the ACLU understands what the left-wing base of the Democrats (that the presidential contenders are looking to please) is thinking.

But it’s just as telling as to what other kinds of speech the ACLU thinks is not only worthy of defense, but also laudable. When Rep. Ilhan Omar (D-Minn.) tweeted an anti-Semitic trope about Jews buying Congress, her party’s leadership chastised her and forced her to apologize. But not the ACLU.

Jamil Dakwar, the head of the ACLU’s Human Rights Program, chose that moment to tweet:

“The pressure on @IlhanMN to apologize is only the tip of the iceberg. The ultimate goal is to silence her and to boot her out of Congress for her courageous positions on foreign policy issues including her support to the BDS movement. Are you with Trump or @Ilhan. #IStandWithIlhan.

This makes it crystal-clear that the ACLU isn’t opposing the anti-BDS bill on bogus free-speech grounds. It’s doing so because it is actually in favor of an anti-Semitic movement. House Democrats should take that into consideration when the ACLU and others on the left ask them to defeat the anti-BDS bill.

The ACLU has come a long way from a controversial but principled stand in favor of Nazis marching in Skokie to an unprincipled defense of BDS, anti-Semitism and hatred for Israel. Not only does it no longer deserve a reputation as a fearless defender of civil rights, the organization is unworthy of the support of any American, Jewish or non-Jewish, no matter what their political loyalties might be.