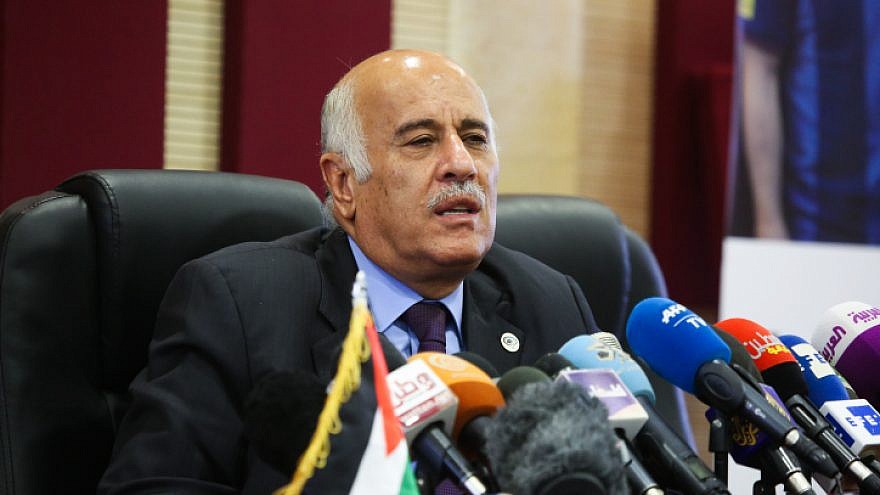 Fatah Central Committee member and Palestinian Football Association head Jibril Rajoub speaks during a press conference on the cancellation of the soccer match between Argentina and Israel, in Ramallah on June 6, 2018. Photo by Flash90.
Spread the word.
Help JNS grow!
Share now:

(June 22, 2020 / JNS) Senior Palestinian official Jibril Rajoub said on Sunday that while peaceful resistance is the preferred strategy at the moment with regard to Israel’s plan to apply its sovereignty in the Jordan Valley and parts of Judea and Samaria, “our fingers are on the triggers.”

Speaking at a press conference in Ramallah, Rajoub, a Fatah Central Commitee member and former commander of the Palestinian Authority’s Preventive Security Force, urged Palestinians to participate in a “peaceful resistance” movement against Israel’s sovereignty plan, claiming that European and United Nations envoys would also take part. The first Fatah-sponsored anti-sovereignty protest, he said, would be held in Jericho on Monday.

U.N. Special Coordinator for the Middle East Peace Process Nickolay Mladenov, said Rajoub, would be among the participants in the Jericho protest.

However, he stressed that if Israel actually extends its law to Judea and Samaria, the Palestinians’ approach will change.

“Returning to the square of blood” did not serve the Palestinian cause at this time as it would jeopardize the Palestinians’ ability to “[maintain] the state of conflict between the international community and Israel,” said Rajoub, according to Israeli media reports. However, he added, “If the annexation is imposed, our tactics and methods will change.”

“The Palestinian people will not suffer alone, nor die alone if Israel goes ahead with the unilateral annexation of parts of the occupied West Bank,” said Rajoub, according to IANS, India’s largest independent news agency.

The Israeli government has said it may move ahead with its plan to apply Israeli law to the Jordan Valley and parts of Judea and Samaria starting on July 1.