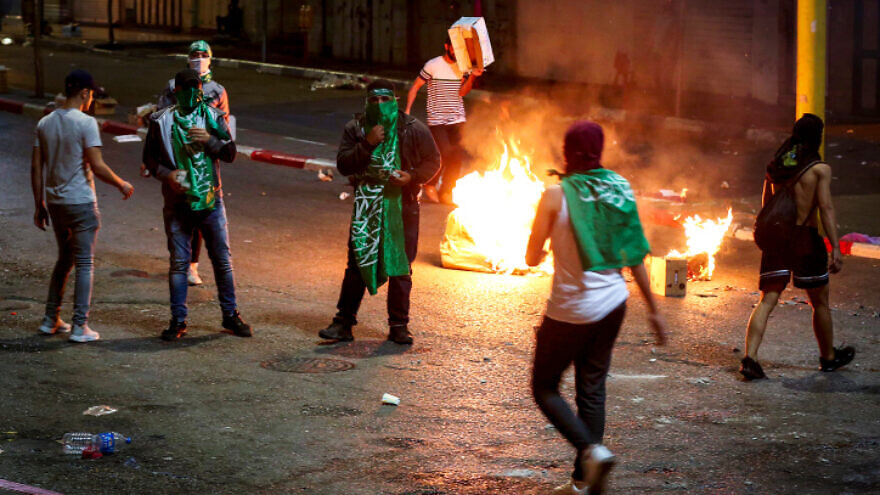 (September 9, 2021 / Israel Hayom) Riots broke out across the Judea and Samaria on Wednesday evening, and fires broke out at several Israeli prisons, amid rising pressure on the government and security forces to find six Palestinian terrorists who escaped a maximum-security facility in northern Israel two days earlier.

Shots were fired at Israel Defense Forces’ soldiers in Ramallah, but no injuries were reported among the troops.

The Palestinian Red Crescent medical services said 60 rioters were wounded by tear gas in protests in the Nablus area.

IDF troops fired stun grenades at Palestinian protesters gathered at the Damascus Gate in the Old City of Jerusalem. The protesters were heard chanting “Where is Zakaria?”—a reference to Zakaria Zubeidi, the most notorious of the six terrorist inmates who escaped Gilboa Prison near Beit She’an on Monday. A bus also got hit by rocks in the city, according to news reports.

The Palestinian Red Crescent also reported violent clashes between Palestinian protesters and Israeli security forces in the towns of Beita and Huwara in Judea and Samaria.

The IDF said that a general closure of Judea and Samaria, which was supposed to have been lifted on Thursday following the Rosh Hashanah holiday, will be extended at least another 24 hours.

The Israel Prison Services said that a fire broke out in two cells in different wings of Ramon Prison and that the blaze was brought under control. Palestinian inmates torched seven cells in Ketziot prison in retaliation for efforts to move them to different locations. Fires were also reported at Ramon and Megiddo prisons. Immediately following the jailbreak, all of the security prisoners at Gilboa Prison were relocated and dispersed throughout other prisons in the country.

The Palestinian prisoners’ group had called on inmates to resist being relocated and to start fires in their cells if guards try to move them by force. They also threatened a widespread hunger strike.

Inside the prisons, Fatah, Hamas, Palestinian Islamic Jihad and other factions each have an organized presence and appear to be acting together in the wake of the escape.

Meanwhile, blame for Monday’s breakout rippled through the prison system and checkpoint closures between Israel and Judea and Samaria were extended into the weekend.

A spokesman for Prime Minister Naftali Bennett said that the premier met with the heads of Israel’s security services and stressed that the country was ready for “any scenario.”

“The events have the potential to impact numerous fronts,” the statement from the prime minister’s spokesman added, as the IDF bolstered its forces stationed in Judea and Samaria.

Bar-Lev on Thursday morning vowed that “we will get our hands on the escaped terrorists, fix the failures that led to their escape and, to the extent we discover professional negligence, we will handle that, too.”

Meanwhile, the Israel Police has reportedly gained information substantiating suspicions that prison guards helped the terrorists escape Gilboa Prison, according to sources familiar with the investigation.

The police investigation is headed by the Lahav 433 Major Crimes Unit and includes investigators from the International Fraud Unit. Police are expected to question two prison guards involved in the case.

According to Bar-Lev, the investigation was also focusing on whether “criminal elements were involved” in the escape.

Monday’s escape was Israel’s largest jailbreak in decades. The six escapees, between 26 and 49 years old, had apparently dug a tunnel out of Gilboa Prison.

The event potentially poses a dilemma for Palestinian Authority leader Mahmoud Abbas, whose security forces coordinate with Israel. His Fatah party has praised the prison escape, but he has not commented on it.

Palestinians view prisoners held by Israel as heroes of their national cause and have celebrated the prison break.

Around 500 Palestinians gathered in the cities of Ramallah, Bethlehem, Hebron and other West Bank locations, some chanting “freedom” and waving Palestinian flags.

“We came out in solidarity with our prisoners in the occupier’s jails,” said Jihad Abu Adi, 25, as protesters nearby set tires ablaze. “It’s the least we could do for our heroic prisoners.”

If the escapees are apprehended in the West Bank, many Palestinians are likely to blame the P.A., which is already facing a popular backlash after the death of an activist in its custody in June.