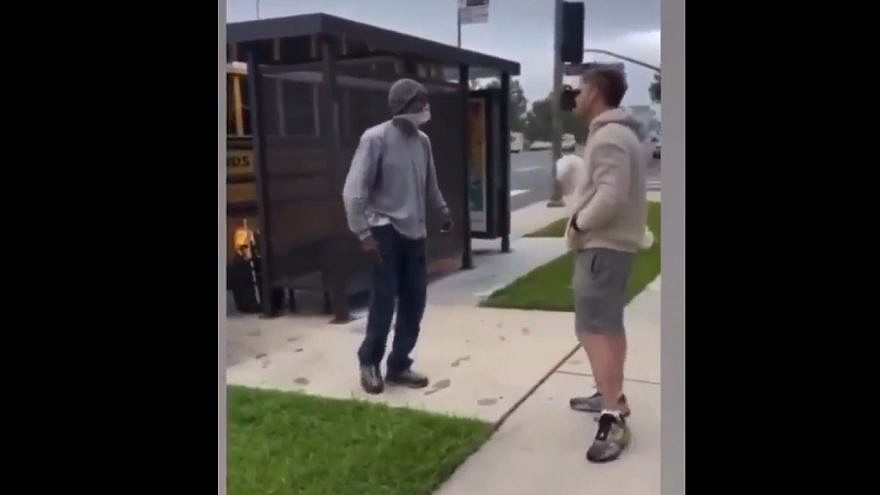 A Jewish man is verbally assaulted by anti-Semitic language before loading his children onto a bus to go to summer camp on June 21, 2021. Source: Twitter.
Spread the word.
Help JNS grow!
Share now:

(June 24, 2021 / JNS) A Jewish man was verbally attacked with anti-Semitic language on Monday as he dropped off his children at a bus stop to go to their Jewish camp in the Woodland Hills neighborhood of California.

Jessica Rivera filmed the scene as an African-American pedestrian yelled at her husband, Jay Brazil, after he helped their three children get onto the bus. In the video, first reported by StopAntisemitism.org, the man screamed at Brazil and children on the bus “F**k Jews! Get the f**k out of my country.”

Rivera told JNS: “The man also said ‘Jews are worse than Hitler. You bring filth to our country, you bring bloodshed, you evil wicked Jew, you are the devil.’ He said ‘Hitler just did what God told him to do.’ ”

She explained that the attacker knew the children at the bus stop were Jewish because they had kipahs on their heads and their camp T-shirts had Hebrew lettering.

“In the heat of the moment, everyone was just trying to lure him from the entrance of the bus,” she said, adding that the clip does not show the kids, who were “hiding for safety and then running to the bus.”

Police were not called to the scene, and a police report was not filed.