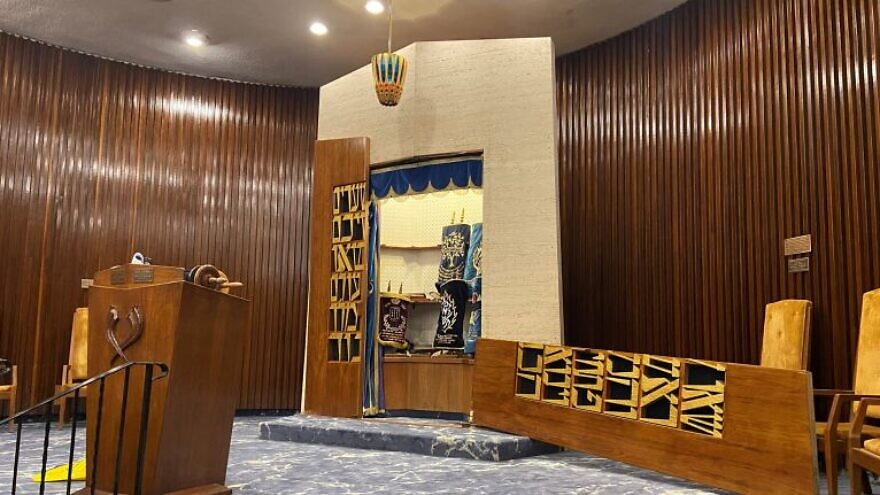 The broken door of the ark at the Chabad of the Beaches synagogue in Long Beach, N.Y., August 2021. Source: Rabbi Eli Goodman/Twitter.
Spread the word.
Help JNS grow!
Share now:

(August 24, 2021 / JNS) Authorities arrested a man and charged him with burglary in connection to the vandalism of a Chabad synagogue in Long Beach, N.Y., according to LIHearld.com.

On Saturday afternoon, Rabbi Eli Goodman of Chabad of the Beaches discovered the door of the ark inside the synagogue broken off its hinges and two Torah scrolls missing. Another two scrolls were thrown on the floor. Jewish prayer shawls (tallises) were also found on the floor, and the silver crowns on top of Torah scrolls (rimonim) and religious silver chains were also gone.

Hunter McElrath, 23, was arrested for disorderly conduct on Saturday afternoon after police found him walking naked on the beach wearing a tallis, reported Newsday. He was released by police before he was taken to the hospital for an evaluation.

Police later received a call about the synagogue vandalism and after checking Chabad’s surveillance videos, McElrath was rearrested on Sunday and charged with burglary.

The silver crowns were found on the beach; police are still searching for the missing Torah scrolls, which Goodman said span four generations.

McElrath did not tell police his motive for vandalizing the synagogue, and authorities said the burglary did not appear to be a hate crime or an anti-Semitic attack, according to Newsday.

Police Commissioner Ron Walsh said the suspect has an extensive arrest record across the United States, though none previously in Long Beach.