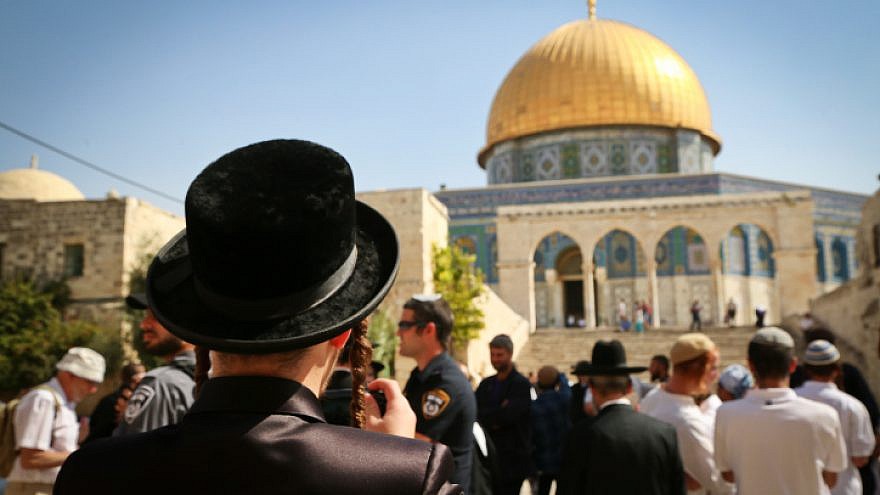 Jews visit the Temple Mount compound, site of the Al-Aqsa mosque and the Dome of the Rock in Jerusalem's Old City, during the Jewish holiday of Sukkot, Oct. 8, 2017. Photo by Yaakov Lederman/Flash90.
Spread the word.
Help JNS grow!
Share now:

(May 4, 2022 / JNS) Fifty percent of the Jewish population of Israel support Jewish prayer on the Temple Mount in Jerusalem, the holiest site in Judaism, according to an Israel Democracy Institute (IDI) Israeli Voice Index poll.

The survey found that 38% base their support for Jewish worship at the Temple Mount on “the message it sends regarding Israel’s sovereignty over the holy site,” while 12% cited religious reasons, saying prayer there is a religious commandment.

Some 40% oppose Jewish worship on the mount, with the majority (23%) expressing concern over a negative reaction in the Muslim world and 17% saying it’s forbidden by Jewish law. (Some Jewish religious authorities hold that Jews should not visit the site as it was the location of the ancient holy temples.)

According to status quo arrangements reached after the 1967 Six-Day War when Israel conquered the eastern part of Jerusalem where the Temple Mount is located, Jews may visit the Temple Mount but not pray there.

Muslims say that Jews have changed the status quo and allowed prayer at the site, declaring this a reason for recent rioting on the Temple Mount, which Muslims refer to as Al Aqsa, and claim as the third holiest site in Islam.

The IDI survey also broke down those polled by religious observance, finding that most haredim, nearly 87%, oppose Jewish prayer on the Temple Mount.

On the other hand, more than half of Jews who identify as either national religious or traditional religious support prayer on the mount, as did nearly half of all “traditional non-religious,” who said Jewish prayer bolsters Israel’s sovereignty at the site.

Of secular respondents, 39% oppose Jewish worship on the Temple Mount due to fears of a negative reaction across Muslim states.

The Israeli Voice Index was prepared by the Viterbi Center for Public Opinion and Policy Research of the Israel Democracy Institute. The survey was conducted between April 24-26 on the Internet and by telephone, involving 601 men and women in Hebrew and 150 in Arabic.