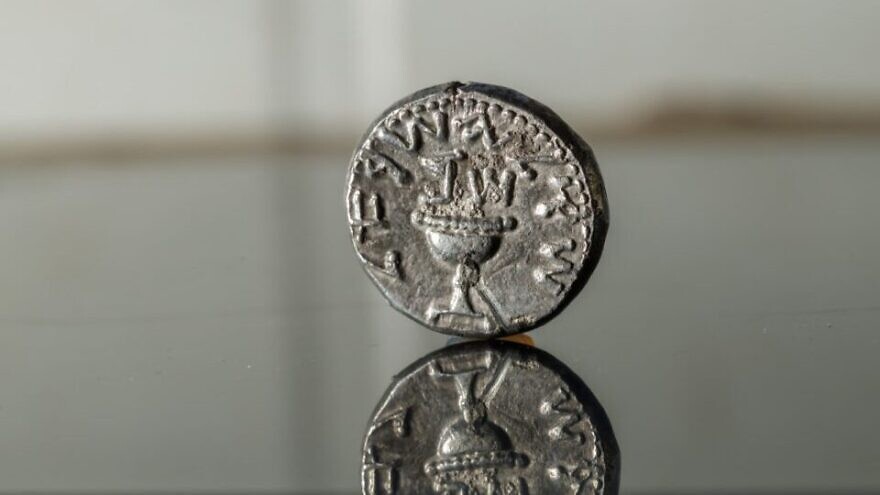 A 2,000-year-old silver coin found in debris from an excavation in the City of David. The inscription on the coin reads "Shekel Yisrael," and above the chalice are the Hebrew letters "Shin" and "Bet," an acronym for "Shana Bet," or Year Two of the Jewish revolt against Rome. Credit: Eliyahu Yanai/ City of David.
Spread the word.
Help JNS grow!
Share now:

(November 24, 2021 / Israel Hayom) A 2,000-year-old silver coin experts believe may have been minted by a Temple priest was recently found in Jerusalem by an 11-year-old Israeli girl.

Liel Krotokop came across the coin while helping sift archaeological debris from the excavation of the Pilgrimage Road in the City of David national park.

One side of the coin features an image of a chalice with the inscription “Shekel Israel.” Next to the cup the Hebrew letters Shin and Bet appear, an acronym of the words “Shana Bet,” or “Year Two”—a reference to the second year of the Jewish revolt against the Romans (67-68 C.E.).

The flip side of the coin features a depiction of what researchers say is the staff of the High Priest, flanked by the words “Holy Jerusalem” in early Hebrew script.

Dr. Robert Cole, head of numismatics at the IAA, explained that the discovery was a rare one.

“Of the thousands of coins found thus far in archaeological excavations, only about 30 are made of silver and date from the time of the great rebellion,” he said.

Cole believes that the silver used to mint the coin was taken from the Temple stocks, and that the coin itself was minted on the Temple Mount grounds, possibly by one of the priests.

“This is very high-quality silver. Where else could this amount of silver, of this quality, have been found in those days? Only at the Temple. If this is the case, we can say cautiously that this coin appears to have been one of the few items we can hold today that originated from the Temple itself,” he said.

Archaeologist Ari Levy, one of the directors of the dig, said, “This street, which connected the Pool of Siloam south of the City of David to the Temple Mount in the north and comprised the main street of Jerusalem in the Second Temple period, was walked by thousands of pilgrims on their way to the Temple. There is no doubt that there was extensive trade activity here. The many weights and bronze coins we’ve found here is proof of that. But to find a revolt-era coin made from pure silver is certainly unique and exciting.”

Liel, who joined the debris-sifting project for a day with her parents and sister, said, “We spilled out the bucket with the debris onto the screen, and as the stones that were in it were being sifted, I saw something round. At first, I didn’t know what it was, but it looked different from the rest of the stones. My dad brought it to one of the workers, and she showed it to an archaeologist. He looked at it and said it was a silver coin that needed to be cleaned.

“I was really excited. …I never thought I’d find a coin myself, and definitely not a rare coin like this made of pure silver. I was really lucky to have discovered it, but I also want to say thanks to my sister, who picked the bucket that we wound up sifting. If she hadn’t picked that bucket, I probably wouldn’t have found the coin.”