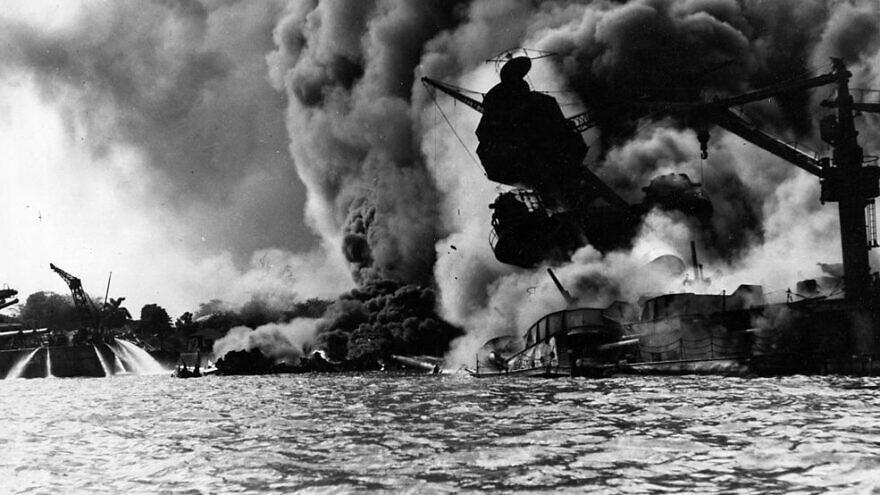 The “USS Arizona,” after being hit by a Japanese bomb on Dec. 7, 1941. At left, men on the stern of “USS Tennessee” are using firehoses on the water to keep burning oil away from their ship. Credit: U.S. Navy.
Republish this article
763 WORDS
Spread the word.
Help JNS grow!
Share now:

(December 9, 2021 / The Jewish Journal) Sherman Levine was 17 years old when he volunteered in the U.S. Army. At Von Steuben High School in Chicago, he was a formidable athlete who lettered in swimming, basketball and baseball. In Nov. 1940, just months after graduating, he enlisted in the Army Air Corps, which, in June 1941, became known as the Air Force. Assigned to the Hawaiian division, he served at Hickam Air Force base on the island of Oahu.

On the morning of Dec. 7, 1941, Levine was one of two weather observers at Hickam. At the sound of sudden Japanese aerial attacks, he ran out of the administration building near the flight line in search of his helmet. When Levine and five other servicemen ran to the barracks, they were killed by an 800-pound Japanese bomb that dropped on them from overhead.

Hickam Air Base suffered terrible damage on Pearl Harbor because the Japanese wanted to prevent an immediate air response from America.

In April 1942, a B’nai B’rith chapter in Chicago held a benefit dance for the Red Cross. The following month, Levine’s mother, Esther, and his brother, George, presented the Red Cross with a check for $500, raised from the proceeds. Levine’s family did not receive his body back until 1947, six years after he had been killed at Pearl Harbor. He was posthumously awarded the Purple Heart.

On Oct. 26, 1947, Sherman Levine was buried with full military honors at Westlawn Cemetery in Chicago.

The local B’nai Brith chapter named both a softball field and a basketball field “Sherman Levine.” He was buried next to his father, Harry, who was gravely ill at the time of Sherman’s death. No one told Harry that his youngest son had died at Pearl Harbor.

Pvt. Sherman Levine is among several Jewish servicemen who perished 80 years ago this week, on what then-President Franklin D. Roosevelt called “a day which will live in infamy.” On that day, the Japanese Imperial Navy killed 2,403 Americans, including 68 civilians, and destroyed 188 aircraft.

That morning, Pvt. Louis Schleifer, from Newark, N.J., was also at Hickam Field, where he was attached to the 4th Reconnaissance Squadron. Four days earlier, he had celebrated his 21st birthday. Schleifer was headed to breakfast when he saw Japanese aircraft dropping bombs over a field. He immediately took his helmet and 45-caliber revolver and ran to move some of the American planes into hangars. He fired at the Japanese planes overhead and was mortally wounded. Later that day, he was posthumously awarded the Silver Star. He was buried at Mount Lebanon Cemetery in Iselin, N.J.

There were other young Jewish casualties at Pearl Harbor, including 3rd Class radioman Lee Goldbarb from Jersey City, N.J., who watched seven battleships get attacked by Japanese planes at Ford Island. When Goldbarb ran to his battle station, the Japanese struck his ship with a torpedo and sank it.

During World War II, more than 550,000 American Jewish men and women served in the U.S. Armed Forces; 11,000 were killed and more than 40,000 were wounded. During the war, Jews comprised just over three percent of the American population and 4.23 percent of the armed forces. At Pearl Harbor, Jewish servicemen performed acts of great heroism, such as saving some of the crew aboard the USS Utah to dropping depth charges against Japanese submarines.

At the time, Gen. Mark W. Clark, Commander, 5th Army Group, said: “Thousands of Americans of Jewish faith are serving under my command, carrying their share of the burden in the battle in Italy. Many of them have been killed in the service of their country. To American soldiers of Jewish faith go my most sincere thanks for their faithfulness, diligence and bravery in battle. To those who have passed on must go a nation’s gratitude.”

But perhaps the most poignant observation about American-Jewish servicemen came from Sen. Charles McNary of Oregon, who spoke at a memorial service on June 30, 1942 for Schleifer, mentioned above.

“Jews have been fighting oppression and tyranny for centuries. They received their basic training in Egypt and became seasoned soldiers on the battlegrounds of Europe,” said McNary.

“Wherever tyranny threatens, wherever the rights of man are in danger of being destroyed, there you will find the Jew, joining forces with others willing to fight and die for freedom.”

For more information about American Jewish servicemen and women who served during World War II, visit the National Museum of American Jewish Military History at: www.nmajmh.org.