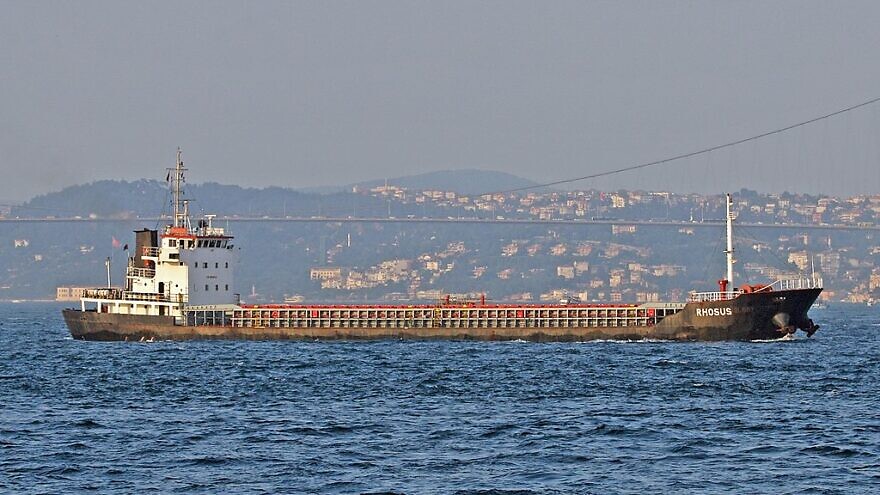 General cargo vessel Rhosus passing Istanbul on July 30, 2011. The vessel was later abandoned in Beirut and sank in 2018. The cargo, stowed in a nearby warehouse, caused the 2020 Beirut explosion. Photo: Frank Behrends via Wikimedia Commons.
Spread the word.
Help JNS grow!
Share now:

(August 23, 2020 / JNS) The massive explosion in Beirut on Aug. 4 has been traced back to a cargo ship, the Rhosus, that arrived in the city’s port in 2013 carrying 2,750 tons of ammonium nitrate. The owner of the Rhosus has now been linked to the Lebanese bank used by Hezbollah, according to an investigation by Der Spiegel and the Organized Crime and Corruption Reporting Project.

While media reports have identified the vessel’s owner as Igor Grechushkin, a Russian national, according to the report published by Der Spiegel on Friday, it was not Grechushkin who owned the Rhosus, but a Cypriot businessman named Charalambos Manoli, who is connected to the Lebanese bank used by Hezbollah.

Further, according to the report, some of the ammonium nitrate at the Beirut port went missing before the massive explosion.

Manoli allegedly made efforts to hide his ownership of the ship and when questioned first said it had been sold to Grechushkin, but then changed his story to say the Russian had only tried to buy the ship.

It was Grechushkin who then ordered that the Rhosus make an unscheduled stop in Beirut on its way from Georgia to Mozambique, claiming he did not have enough money to pay for passage through the Suez Canal and so needed to pick up more cargo in Beirut destined for Jordan. The Rhosus never left Beirut.

According to the report, court records show Manoli took a loan in 2011 for $4 million from the Tanzanian FBME Bank to buy another ship, called the Sakhalin. The FBME bank is accused by American investigators of laundering money for Hezbollah.

A spokesperson for FBME Ltd commented: “Neither FBME, the Saab family, nor their associates had any involvement with the MV Rhosus. FBME Bank did provide, in around 2012, a loan to SeaForce Marine Ltd, owned by Mr. Charalambos Manoli, for the purchase of the MV Sakhalin. This loan was accordingly secured against the MV Sakhalin, which has since been scrapped. Neither Mr. Manoli nor SeaForce Marine Ltd made any repayments towards the loan, and the Bank initiated legal proceedings against them. Since the Administrators took over the Bank in July 2014, we are unaware of the current status of the case. The MV Rhosus was never collateral for the loan and FBME Bank never had any involvement either with its financing or ownership. We believe these allegations are commercially motivated and confirm that we have no relationship with Hezbollah.”