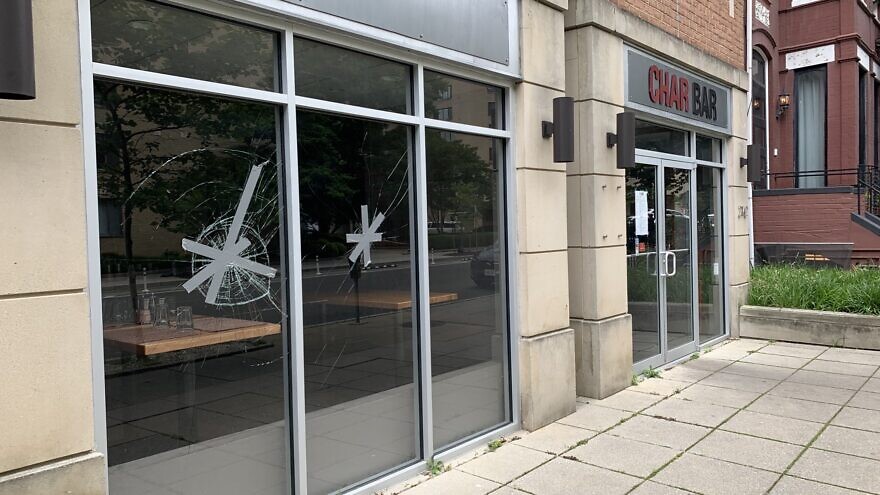 Some of the windows at Char Bar, one of the few kosher restaurants in Washington, D.C., were smashed during riots on June 1, 2020. Source: Aaron Keyak via Twitter.
Spread the word.
Help JNS grow!
Share now:

(June 2, 2020 / JNS) Two of the windows at Char Bar, one of the few kosher restaurants in Washington, D.C., were smashed by rocks on Monday.

The incident happened around midnight, the restaurant’s owner, Michael Chelst, told JNS on Tuesday. There was no other damage to the restaurant, he said.

“People are having to find a way to vent their anger … unfortunately, not the best way,” he said. “Thank G-d, no one was hurt, and we have bigger problems in this country. We’ll just fix the windows and move on.”

Char Bar had been operating on a limited schedule with pickup and delivery amid the coronavirus pandemic. The restaurant will likely be closed at least until Sunday, according to Chelst, who added that he won’t be fixing the glass until the riots subside.

He said that he contacted the Metropolitan Police Department, but was on hold with 911 for more than half an hour. He noted that it could not be determined who was responsible for the damage.

The damage was part of the days-long riots that have ensued during protests nationwide over the death of George Floyd, 46, who died on May 25 in the custody of Minneapolis police.

Police officer Derek Chauvin put his left knee on Floyd’s neck for nearly nine minutes on May 25, according to the criminal complaint against the officer, causing Floyd physical distress to the point where he lost consciousness and needed medical attention. Three other police officers were also on site. The incident, filmed on civilian phones, went viral.

Floyd was accused of using a counterfeit $20 bill at a city convenience store and deli.

Chauvin was fired, along with other three officers, the day after the incident. He was formally charged with third-degree murder and manslaughter on May 29.

Jewish and pro-Israel organizations have expressed outrage over Floyd’s death.