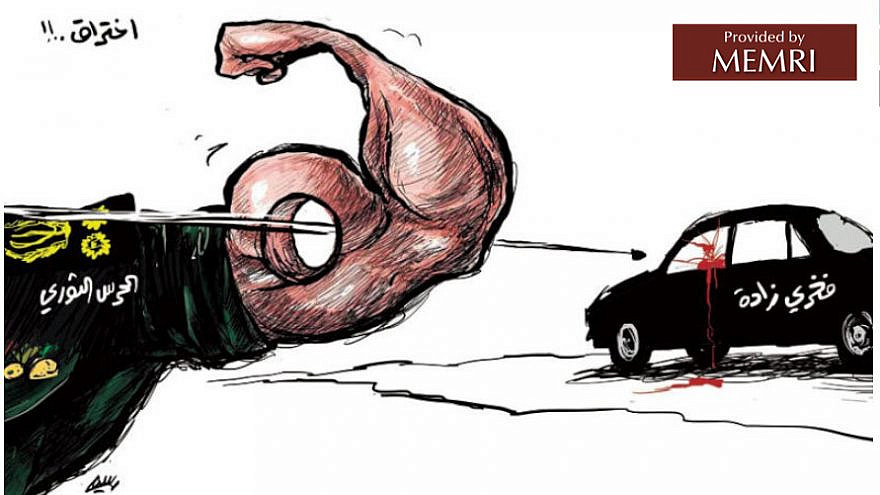 A cartoon in the Saudi daily “Asharq Al-Awsat.” The text reads: “[Mohsen] Fakhrizadeh's assassination is a breach in the ranks of the IRGC.” Source: Asharq Al-Awsat.
Republish this article
1722 WORDS
Spread the word.
Help JNS grow!
Share now:

(December 2, 2020 / MEMRI) Following the assassination on Friday on the outskirts of Tehran of top Iranian nuclear scientist Mohsen Fakhrizadeh, numerous articles have appeared in Saudi media justifying the killing and presenting it as beneficial to the world. Some even went so far as to attack those who have condemned it.

The articles underlined that Fakhrizadeh was no ordinary civilian scientist whose work contributed to mankind, but rather the head of Iran’s malicious nuclear program, which threatens the region and world. Anything that thwarts the Iranian regime’s goal of acquiring nuclear weapons, including the assassination of senior Iranian officials, is a service to mankind, the authors argue.

Some of the articles expressed wonder that anyone could denounce the assassination of a man who had served a criminal regime and worked to build a nuclear bomb with the aim of perpetrating a heinous crime.

It is noteworthy that officially, Saudi Arabia has refrained from condemning the assassination, even though several of its regional allies, among them the United Arab Emirates, Bahrain and Jordan, did so several days after the fact.

The following are translated excerpts from articles in the Saudi press on the Fakhrizadeh assassination:

‘Can one condemn assassination of man who built evil bomb for evil regime?’

In his Nov. 30 column in the Saudi daily ‘Okaz, Saudi journalist Tariq al-Homayed, former editor of the London-based Saudi Asharq Al-Awsat daily, harshly attacked organizations and states that had denounced the assassination.

He wrote: “Although it is reprehensible to rejoice at someone’s death, Mohsen Fakhrizadeh, the Iranian scientist and IRGC [Islamic Revolutionary Guard Corps] commander who was killed outside Tehran, was not working to develop a COVID vaccine; he was known as ‘the father of the Iranian atomic bomb.’ Thus, it is important to expose those who rushed to offer condolences for the death of this Iranian scientist—whose killing is no less a blow [to the Iranian regime] than the killing of [IRGC Quds Force commander] Qassem Soleimani…

“The first to offer condolences and to consider the killing of the Iranian scientist an act of terror were, of course, Hezbollah, the Muslim Brotherhood-affiliated Hamas, the Turkish and Qatari foreign ministries and the [Bashar] Assad regime in Syria. They all extended condolences, condemned the targeted killing and called it an act of terrorism. The Houthis [in Yemen] are sure to follow their example …

“The condemnation of the killing by these terror organizations, and by terror-supporting countries such as Turkey and Qatar, reflects their solidarity with Iran. As mentioned, the Iranian scientist who was killed was not engaged in helping humanity … but in an evil project and a wicked plan against the entire region. [This means that] those who condemn his killing … are the region’s biggest hypocrites—how can they condemn the killing of a man who devoted his life to building an evil bomb for an evil regime when they do not condemn Iran’s killing of unarmed people across the region?

“Iran is the reason for the deaths of Syrians, Iraqis and Lebanese. It is destroying Yemen and sheltering all the terrorist elements in the region. The clearest example of this was provided by Al-Qaeda’s No. 2 leader—who was killed recently in Tehran, not in Afghanistan! … So how can action against the evil [Iranian] leadership be regarded as reprehensible terror? …

“The countries that consoled Iran and condemned the killing of the Iranian scientist are essentially Iran’s partners in shedding Arab blood and in sowing destruction throughout our region, from Iraq through Syria to Lebanon and Yemen. … Iran could not have interfered in our region without [the help of] these agents and states that seek to destroy our stability and security, which once [collaborated with Iran] in secret and now do so openly. It is important to keep tabs on them and denounce them, so as to document [their actions] and warn [people about them]. The murdered [scientist] … had planned to build a sectarian bomb and commit a crime in our region.”

‘Regime’s method of terrorism and assassination has boomeranged on it’

In his Nov. 29 column in Asharq Al-Awsat, Abdullah bin Bajad ‘Otaibi wrote that over the past 40 years, the Iranian regime has used terrorism and assassination against its opponents at home and abroad, and shouldn’t be surprised that its rivals have chosen to respond in kind,

“Regimes choose their weapons according to how they see themselves, who they are, and what they aspire to. A tool used by the Iranian regime is [spreading] chaos and terror around the world, along with everything that this entails: bombings, assassinations, blood-soaked demonstrations and [use of] militias. In fact, the Iranian regime chose assassination as one of its favorite weapons, never hesitating to use it throughout the [past] 40 years, during which it has ruled Iran by force of arms and hounded its opponents to the ends of the earth, seeking to kill them. All the Iranian regime’s proxies in the region—in Iraq, Syria, Yemen and Lebanon—use the same methods as well … Space does not permit me to list all the bombings and assassinations perpetrated by the Iranian regime or by its proxies, in the region and the world…

“But what’s new is that now Iran’s rivals are using the same weapon of terrorism to pursue its members and allies inside Iran, [such as] Al-Qaeda commander Muhammad al-Masri, assassinated in Tehran [on Aug. 7], and Iranian scientist Mohsen Fakhrizadeh, likewise assassinated near Tehran, on Nov. 27, 2020. The crime of political assassination is familiar to most of the world’s nations, no matter what their religion, norms and culture. … Since this crime is one of the Iranian regime’s favorite weapons, some of its rivals apparently preferred to fight back by giving it a taste of its own medicine.

“People need to know that Mohsen Fakhrizadeh was not a civilian scientist who taught at a university or worked at a lab, but an IRGC commander and a senior official in Iran’s defense ministry who was in charge of the nuclear project. Whoever decided to assassinate him wanted to harm the entire [Iranian] regime, just as [this regime harms] its opponents all over the world. So far, nobody knows for certain who planned and carried out this assassination …

“One of the Iranian regime’s problems is that it has a large number of enemies around the world, and there is hardly a single country where it has not interfered in some way or another. As a result, when one of its members is assassinated, it cannot quickly point at any particular country based on reliable evidence. [Instead], it always chooses [to blame] Israel, so as to use its security and intelligence failure as a tool to foment religious and sectarian [sentiment] in an effort to boost the slogans of the regime and strengthen its ideology.

“Israel, the U.S. and the [U.N.] Security Council have been bringing up Fakhrizadeh since 2007. Two years ago, Israeli Prime Minister Benjamin Netanyahu spoke about the danger he posed, and U.S. President Donald Trump tweeted a message hinting that he knew something about the execution of this sensitive operation …

“In conclusion, [the Iranian regime must realize that] what goes around comes around, and that whoever chooses the evil path of assassinations, bombings and terror must know that this can boomerang.”

‘Disrupting attempts to acquire nuclear weapons a service to mankind’

In a Nov. 30 article in ‘Okaz, Mohammed al-Saed claimed that the Iranian regime seeks to acquire nuclear weapons so as to take over the world, such that disrupting these efforts, let alone assassinating senior Iranian officials connected with the nuclear program, is a service to mankind that should not be condemned. He wrote:

“The free world—and not the left or the nationalistic rabble or the devotees of the permissive stream—is absolutely convinced that distancing every Iranian leader from the centers of decision-making benefits mankind and constitutes a message of peace for the entire region. Disrupting the Iranian regime [in its pursuit of] acquiring nuclear weapons is a long-term service to mankind, for it is inconceivable that a backward, oppressive and terrorist regime should acquire nuclear weapons that it cannot control when it would not be able to prevent rival factions in its government from using them during a minimal flare-up of anger. This is because [these factions] … believe that destroying their rivals will bring them salvation that will allow them to control the world.

“Mankind experienced nuclear weapons once, during World War II. Although production [of these weapons] continues, mankind has put in place tough measures making them impossible to use, so that the tragedy will not recur, and they have become strictly weapons of deterrence. … This is because everyone knows that they can destroy mankind—everyone except the Iranians, who perceive them as weapons enabling them to conquer the rest of the world.

“The Iranian clerics do not possess this exalted human emotion, and lack even a minimum of the Islamic morals that would prevent them from perpetrating horrific acts. Their record is replete with crimes; Iraq, Lebanon and Yemen are the best examples …

“The Iranian/Persian Fakhrizadeh is none other than the Turkish/Ottoman Fakhri Pasha, for both were soldiers in the armies of animosity and hatred of the non-Arabs [Muslims] for the Arab residents of the Persian Gulf and for the tribes and families who opposed and still oppose the attempts to take over their countries. Just as the murderer Fakhri Pasha strove to forcibly uproot and banish the residents of Medina over a century ago for the Ottoman Sultanate which no longer exists, so Fakhrizadeh and those behind him strive to uproot the Saudis from their country and to conquer the Kaaba Mosque in Mecca and the Prophet’s Mosque in Medina, in order to realize their dreams of the vanquished Persian Empire.

“[However,] just as the [Turkish Ottoman] tarboosh [a hat similar to a Fez] was defeated in its time by the Arab horsemen, so will the [Persian] nuclear turban be defeated by their descendants.”