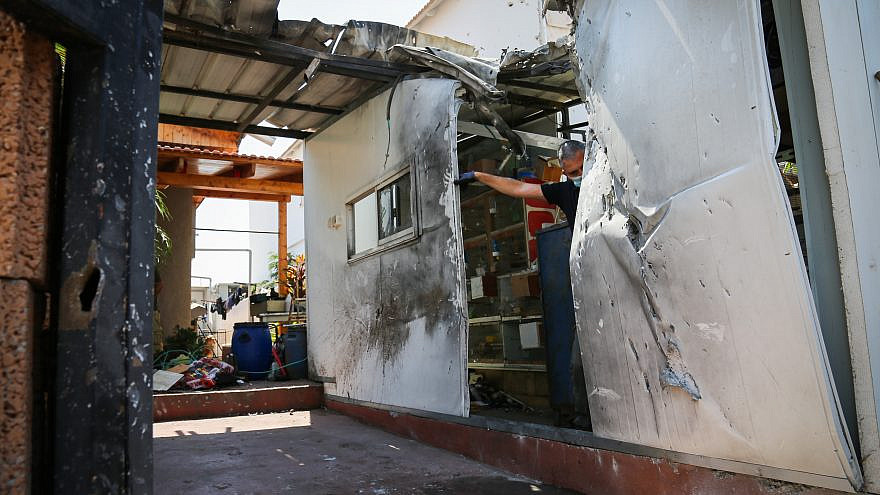 View of damage to a house caused by a rocket fired from the Gaza Strip in the southern Israeli city of Sderot on Aug. 16, 2020. Photo by Flash90.
Spread the word.
Help JNS grow!
Share now:

(April 26, 2021 / JNS) Israel’s Security Cabinet authorized on Monday night a significant attack on the Gaza Strip by the Israeli Air Force if rocket fire from the Hamas-controlled enclave does not stop.

“The ball is now in Hamas’s court,” an unnamed official told Ynet. “We are not interested in seeing violence escalate but are prepared for any event.”

According to officials, Israel was passing similar messages to Hamas through diplomatic channels.

Three projectiles were launched overnight on Sunday in the direction of Sderot in southern Israel for the third night in a row. The Iron Dome air-defense system intercepted two of the rockets and one landed in the border area between Gaza and Israel, according to the Israeli military.

During the Cabinet meeting, the Israel Defense Forces presented various options to target Hamas sites, according to the report. Military officials told the cabinet that Islamic Jihad seemed to be behind that attacks, and that Hamas passed on messages to Israel through the United Nations and Egyptian mediators that it was trying to get control of the situation.