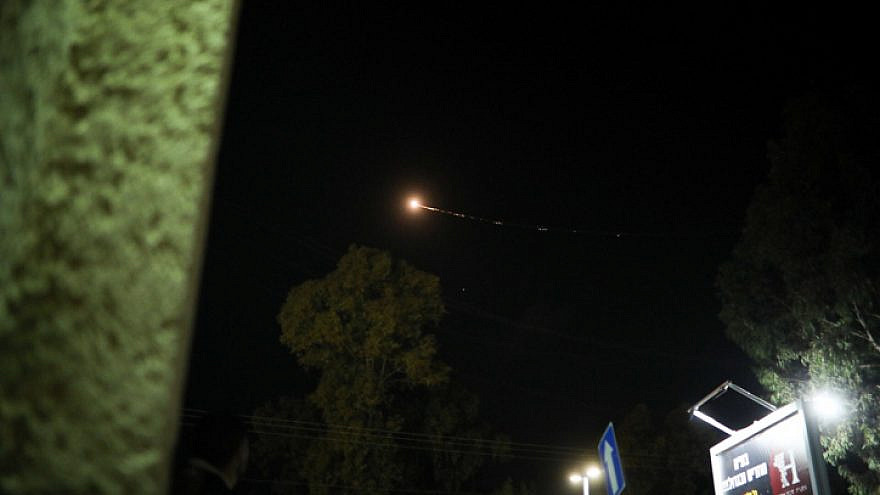 (April 26, 2021 / Israel Hayom) Residents of the western Negev had an uneasy night on Sunday as terrorist factions in the Gaza Strip stepped up the pace of rocket attacks on southern Israel.

On Sunday evening, another rocket aimed at Israel also landed on the Gazan side of the fence.

Following the rocket attacks, Israel’s Coordinator for Government Activities in the Territories (COGAT) Maj. Gen. Ghassan Alian announced the closure of the Gaza fishing zone. An official message from COGAT stated: “The decision was made due to the repeated terrorist actions from the Gaza Strip against Israeli civilians in recent days, which violate Israeli sovereignty.”

“Gaza emphasizes that Jerusalem is not alone and never will be. Gaza is prepared for resistance and its rockets will defend our people at Al Aqsa,” Hamas politburo leader Ismail Haniyeh declared on Sunday evening.

“Today, resistance is stronger, and the people are determined to continue. It doesn’t matter who the victims are; this is our obligation,” he said.

The Hamas leader threatened: “There is no ‘quiet’ with the occupation if the Zionist entity continues its aggression on Jerusalem. We are standing before a new chapter and a historic moment. We will continue on our path and not stand by idly.”

In the past few months, the Israel Defense Forces has changed its policy on rocket fire from Gaza. Rather than responding to every instance of rockets fired the same night they are fired, the new policy calls for the IDF to keep a “tab,” and respond to rocket attacks or other violent actions against Israel at the most convenient time and place.

Most members of Israel’s top defense and security brass are of the opinion that the escalations between Israel and Hamas that have taken place in the past few years did not end in a satisfactory manner because Israel found itself being dragged into each of those rounds of violence rather than taking the initiative.

Now, after a weekend that saw terrorist operatives in Gaza fire some 40 rockets at Israel, the defense apparatus is again announcing that “calm will be met with calm,” and the IDF response was comparatively low-key. The IDF opted not to respond even after several rockets were fired on Saturday evening.