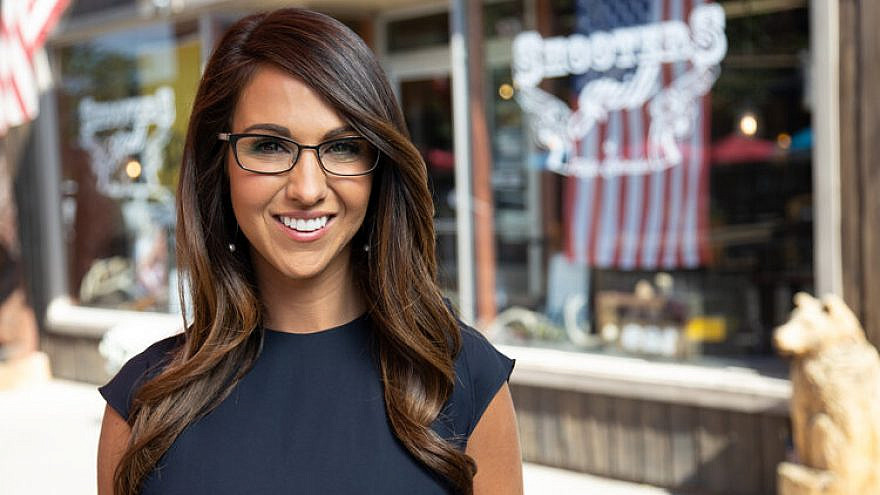 She will join a record number of Republican women elected to Congress this year.

In an interview with JNS on Nov. 27, Boebert, 33, who earned a GED and is married with four boys, said she ran for office because elected officials “were giving away” our constitutional rights, and they “overregulate, overtax, overspend and destroy everything we’re building here at home.”

Three themes define Boebert’s politics: outspoken support for the Second Amendment, devout religious faith and staunch support for U.S. President Donald Trump. Those themes apply to her being “absolutely pro-Israel,” despite showing a lack of interest on the policy front.

“It’s tremendous what President Trump has done in his short time in office,” she said, citing the move of the U.S. embassy in Israel from Tel Aviv to Jerusalem and the U.S.-brokered Abraham Accords.

She touted that Trump has been the most “pro-G-d, pro-Israel, righteous pro-life president America has ever seen.”

She said that there have been presidents, including Republican ones, “who say they are Christian, and they talk the talk. But he’s the first one to really walk the walk, and make these things happen.”

Boebert, whose congressional district is home to approximately 2,000 Jews, said she supports the Jewish state “not because I’m a Republican, but because I am a Christian.”

“Just from my strong Christian faith, I see where G-d expects us to honor Israel,” she continued. “And he says those who bless Israel will be blessed.”

She went on to say that the United States and Israel “share common values” such as “human rights, freedom of speech, freedom of religion” and “democratic principles.”

“There’s not too many places outside of Israel where an Arab woman can vote,” she said, citing that women in Saudi Arabia only recently got the right to vote and to drive.

Boebert pointed out that America and Israel have common enemies, including Iran and its proxies Hezbollah and Hamas.

As someone who, like Trump, has decried so-called “endless wars” in the Middle East, Boebert said she’s grateful that Israel has been “battling those battles on their soil with their men and women,” efforts that the United States should continue to assist Israel financially.

Boebert has never been to Israel, although she said she’s “always wanted to go.” She said she plans on going as soon as possible with a congressional delegation organized by the American Israel Public Affairs Committee, or AIPAC.

‘Enough is enough’ with ‘endless wars’

A strong advocate for the right to keep and bear arms, Boebert and her husband, Jayson, run a restaurant called Shooters Grill, ironically, in a western Colorado town called Rifle. The waitresses conceal and carry guns.

Although she expressed support for Trump’s tough Iran posture, including withdrawing from the 2015 Iran nuclear deal and enacting punishing sanctions on the regime, when it comes to militarily combating the threat from the Islamic Republic, Boebert said that America doesn’t “need to be the world’s police.”

As it pertains to U.S. military intervention in the Middle East, Boebert said “enough is enough” with “endless wars.” She praised Trump for not starting another conflict and for bringing U.S. troops home.

When asked if America should militarily fight Iran and its proxies, Boebert declined to answer.

“I think we’re getting a little too deep into policy here,” she said.

In response to what President-elect Joe Biden has said he would do on issues relevant to the Jewish and pro-Israel community, including keeping the U.S. embassy in Jerusalem and returning to the Iran nuclear deal if Tehran returns to compliance, Boebert replied that “basically, Biden wants to undo everything President Trump has been successful at.”

Boebert previously expressed support for QAnon, although she told Axios in July that she doesn’t follow the conspiracy theory. Without saying what investigation she was referring to, she said she is “glad the IG and the AG are investigating deep-state activities that undermine the president.”

Despite there being a rise in anti-Semitism in America and abroad, Boebert said she was unaware of such an increase.

“I don’t know about there being a rise,” she said.

Without naming anyone in particular, she said, “There’s definitely been some congressional members who have had very anti-Semitic comments and, just like everything else that Democrats do, it gets swept under the rug and they diminish the story.”