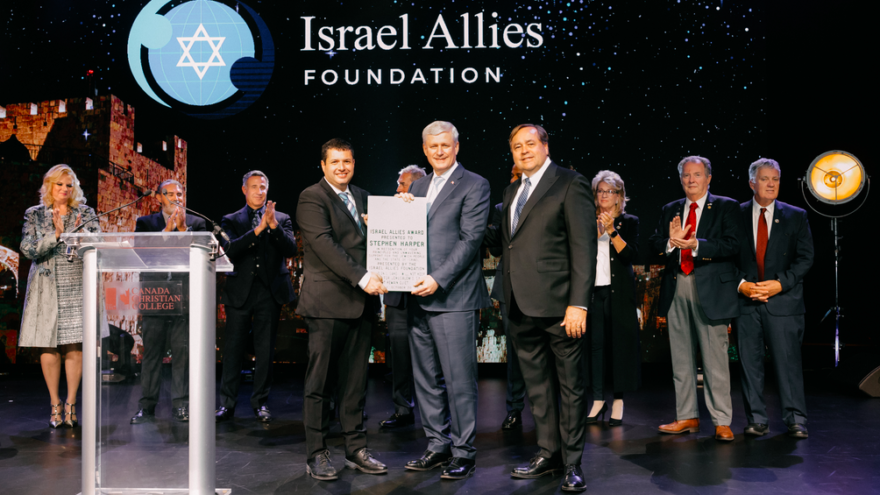 “I am deeply honored to be recognized by the Israel Allies Foundation in front of so many distinguished friends here at home in Canada,” Harper said in his short address. “I am proud to continue to use my voice in support of the State of Israel, while addressing and forcefully denouncing the ongoing and very worrisome rise of anti-Semitism.”

Harper served as Canada’s 22nd prime minister from 2006 to 2015. He is an Evangelical Christian who regularly was outspoken about his support for the Jewish state. In June 2019, a video of Harper explaining the rationality of supporting Israel went viral achieving more than 2.4 million views. In the Prager University video, he labeled people who are anti-Israel as anti-Semitic.

The IAF event was held in partnership with Canada Christian College and was attended by more than 600 people, including members of the Canadian parliament, local rabbis and pastors.

Among the guests was Israeli Ambassador to the United Nations Gilad Erdan, who praised Harper and said, “When we stand up for what we believe and do not falter in our faith, we can achieve miracles. Under former Prime Minister Harper’s leadership, Canada showed the world what it means to stand up for what is right.”

Recently, IAF rolled out its list of Top 50 Christian Allies, on which Harper was listed as No. 3. Over Sukkot, around 3,000 Christian pilgrims came to Israel for the Feast of Tabernacles celebration organized by the International Christian Embassy in Jerusalem. IAF President Josh Reinstein was among the speakers at one of the event’s VIP receptions.

“Today it is Christians not countries that are standing with Israel,” Reinstein told JNS. “Due to leaders like Stephen Harper, faith-based diplomacy has produced a new stream of support the State of Israel never thought possible and the best is yet to come.”