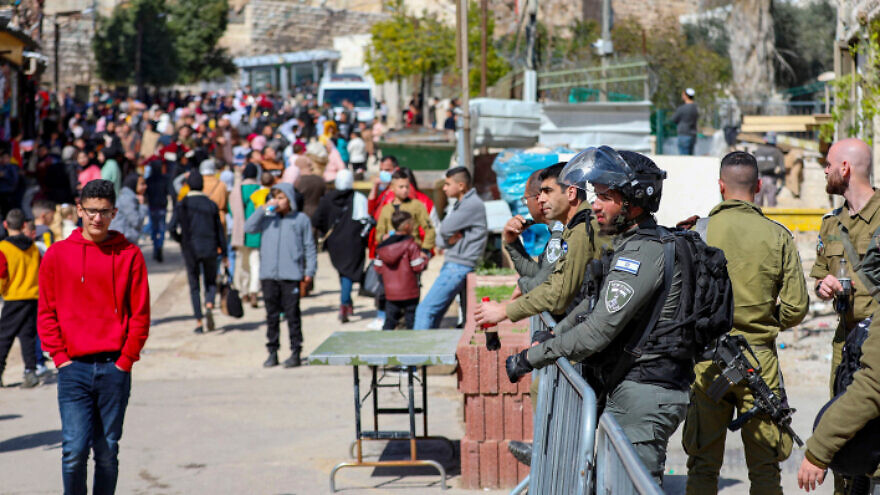 Palestinians near the Cave of the Patriarchs in Hebron, on Feb. 28, 2022 Photo by Wisam Hashlamoun/Flash90.
Spread the word.
Help JNS grow!
Share now:

(April 11, 2022 / JNS) A Palestinian woman was killed by Israeli security forces at the Cave of the Patriarchs in Hebron on Sunday after she stabbed a Border Police officer in the neck.

The officer sustained minor wounds in the attack, the Kiryat Arba Municipality said in a statement.

This is the latest incident in a spate of recent terrorist attacks across the country. On Thursday, a terrorist from Jenin opened fire at the patrons of a bar in central Tel Aviv, killing three. Fourteen Israelis have been murdered by terrorists since late March.

During a visit to the Israeli civilians wounded in Thursday’s deadly terrorist shooting in Tel Aviv, Israeli Prime Minister Naftali Bennett said on Saturday that Israel was shifting “from defense to offense” in the fight against terrorism. Israeli security forces were intensifying activities against “the sources of the terrorism at any time and any place,” he said.

In a separate incident on Sunday, a mentally ill Israeli Jew tried to take a soldier’s weapon at an Ashkelon bus stop. He was shot dead by a senior IDF commander who happened to be nearby. Terrorism has been ruled out.