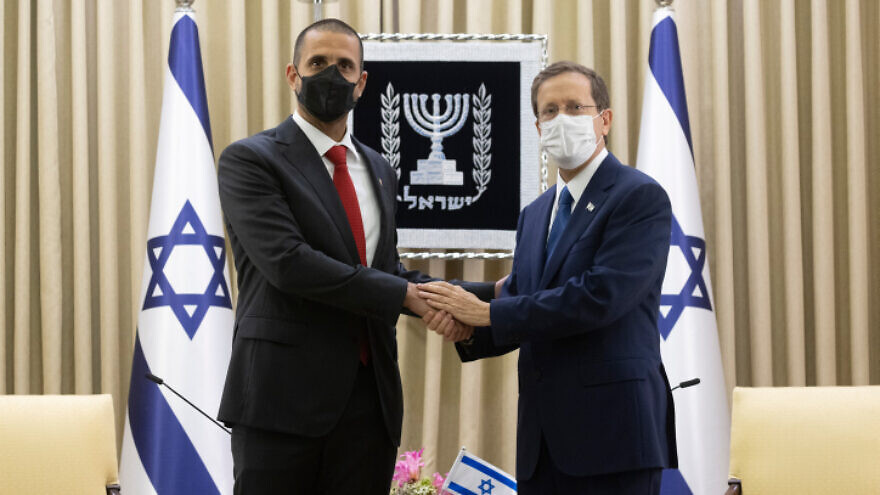 This is the first time an Israeli company is participating in the event, and according to Sharon Biton, IAI’s vice president for marketing in the Middle East and North Africa, it is this, and not the business aspect, that is most important.

“We take this with real seriousness,” he said. “This is not just an opportunity. It is part of longer-lasting relations we are building on.”

The Arab countries that signed the Abraham Accords normalization agreements with Israel “are not just countries we are visiting,” he said. Rather, Israel is working with these and other countries to be “stronger together,” which just happens to be the slogan IAI is using for the show.

“We are talking about creating a stronger environment,” he said. “First and foremost—we are proud to say it and say it out loud—because of the Abraham Accords. Second, at the end of the day, IAI is a defense company and business is part of the deal, but it doesn’t come first place. We come to meet new people and develop new connections.”

As a leading global airshow bringing together the industry’s best companies and brightest minds, the Bahrain International Airshow provides IAI with the opportunity to come together with Bahrain, the Gulf countries more broadly, and other global companies.

“The show is a place where you can see a lot of delegations all in the same place in a very short time, where you get to see everybody in the right environment,” said Biton. “We look at it as a strategic partnership, a regional one. It’s not just about the shows.”

Biton noted that the excitement in Manama over IAI’s participation in the Airshow is palpable, saying he has received phone calls from people he knows asking if IAI is participating.

“I can definitely feel the excitement,” he said. “We are here to stay.”

However, Eyal Zisser, vice rector of Tel Aviv University, downplayed the idea that the IAI’s participation in the event was particularly groundbreaking, noting that Israel had announced back in September an agreement to sell an advanced air defense system to the United Arab Emirates to help defend it against drone attacks.

“The relations with these two countries [Bahrain and the UAE] are not like with other Arab countries,” said Zisser. Rather, they are characterized by “warmth, closeness and intimate cooperation including in security issues.”

If anything, he said, the Bahrain airshow is simply a tangible expression of deeper developments behind the scenes.

As Amir Peretz, chairman of IAI’s board of directors, put it, “The Abraham Accords have opened the door for us to participate for the first time in this exhibition and to work collaboratively with our neighbors to deal with the common threats we face in the region.”