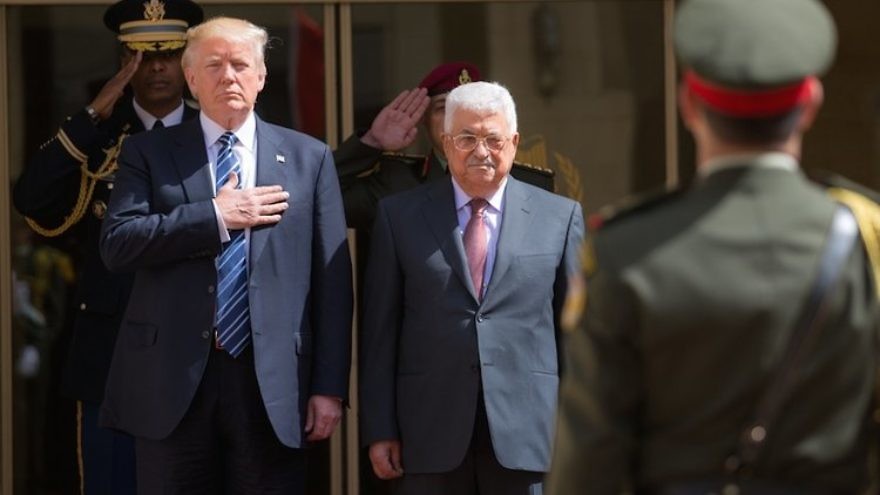 (October 20, 2020 / JCPA) Four difficult years have passed for the P.A. and its leader, Mahmoud Abbas, since U.S. President Donald Trump took office. Senior Fatah sources say that in recent days the color has returned to the cheeks of Abbas following the publication of polls in the United States indicating that former Democratic Vice President Joe Biden is leading by a wide margin over Trump in the presidential race.

Abbas’s strategy has failed; the rejection of any peace plan that does not meet 100 percent of their demands has led the Palestinians to this nadir. Today, Abbas is signaling to Israel, the United States, and moderate Arab countries that he has no problem joining the “Muslim Brotherhood” axis headed by Turkey and Qatar.

Israeli construction continues in the West Bank and eastern Jerusalem, the economic situation in the territories is difficult, unemployment is surging, and the Coronavirus is spreading. Moreover, the Palestinian treasury is being depleted, mainly because of the P.A.’s refusal since last May to accept the import taxes that Israel collects for it—about $180 million a month—because of Israel’s sovereignty plans and the Israeli law requiring it to deduct the sums the P.A. pays to terrorists and their families from the tax transfers.

Abbas is looking for a way to reverse the pressure, particularly after Saudi Prince Bandar bin Sultan described the Palestinian leadership as “failing to miss every opportunity for peace.”

Abbas’s desperate hope is the election of Joe Biden. He believes that if Biden becomes the next American president, this will immediately change the P.A.’s political status and economic situation.

The P.A. makes no secret of its hatred for Trump and its desire for his election defeat. On October 13, 2020, Palestinian Prime Minister Mohammed Shtayyeh told members of the E.U. Parliament’s Foreign Affairs Committee: “If we are going to live another four years with President Trump, God help us, God help you, and God help the whole world.”

Senior P.A. sources charge that Trump has been the president who has done the most damage to the Palestinian people since 1967.

The Palestinians say Trump destroyed their dream of establishing a Palestinian state along the 1967 lines with its capital in eastern Jerusalem and a resolution of the refugee problem. Trump recognized Jerusalem as Israel’s capital, moved the American embassy from Tel Aviv to Jerusalem, closed the PLO offices in Washington, cut civilian aid to the PA, stopped U.S. aid to UNRWA, announced the “Deal of the Century,” and recognized the legality of the Jewish communities in the West Bank.

According to P.A. sources, Abbas has maintained a regular dialogue with Biden through a well-known businessman and has received a series of promises from Biden, should he be elected.

According to these sources, Biden’s promises to the Palestinians include:

If Biden is elected, he is expected to continue to support the normalization of relations with Israel by Arab countries. However, his desire to return to the nuclear agreement with Iran and lift some of the sanctions imposed on Iran by the Trump administration raises great concern in Saudi Arabia and other Gulf states. Moreover, senior PA officials suggest that if Biden enters the White House, the process of normalization of relations by Arab and Islamic countries with Israel will be frozen until the new U.S. policy becomes clear.

According to senior P.A. officials, the election of Biden could strengthen the political position of Abbas internally, and he will find a way to evade Palestinian elections once more. Perhaps he will continue his talks with Hamas about running in parliamentary elections on a Hamas-Fatah joint list that will agree to divide the seats in parliament between the two movements.

At the same time, there are senior P.A. officials who estimate that Biden, if elected, will not rush to dip his feet in the Israeli-Palestinian swamp. He will have to address the Corona epidemic and the deep economic crisis in the United States, and the Palestinian problem will not be his primary concern.

The same officials warn that the traditional American political system supports maintaining the regional status of the State of Israel from a security standpoint. The U.S.-Israel relationship is a strategic alliance between the two countries, and Abbas will find it very difficult to drive a wedge between Biden and the Israeli government.

The bottom line, these sources say, is that Trump did not give the P.A. what it wanted, namely: a Palestinian state on the 1967 lines with its capital in eastern Jerusalem and resolution of the refugee problem. Neither will Joe Biden provide the Palestinians with what they want if he is elected president.

“Joe Biden is far superior to Donald Trump, but the Palestinians are in for many more years of struggle until they fulfill their national desires,” concluded a Palestinian observer.

Yoni Ben Menachem, a veteran Arab affairs and diplomatic commentator for Israel Radio and Television, is a senior Middle East analyst for the Jerusalem Center. He served as director-general and chief editor of the Israel Broadcasting Authority.