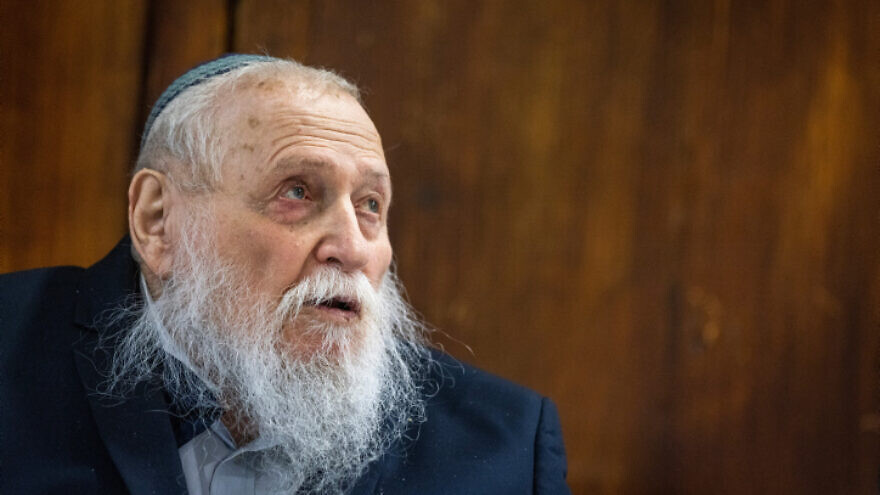 (November 21, 2022 / Israel Hayom) The return of the right to power in the recent Israeli elections is “a badge of honor for the [national religious] sector and proves that this is what the public wants,” according to Rabbi Haim Drukman, one of the most influential figures in the national-religious sector.

In a lengthy interview on the heels of a momentous election campaign, Drukman refused to mention any politicians or public figures by name. However, it was clear from his words that in his eyes, the election results demonstrate that the public wants a Jewish state run by Halachah (Jewish law).

Having recently celebrated his 90th birthday, and with his health not what it used to be, Rabbi Drukman still advises and guides many politicians. He still serves in many significant positions in the religious sector, among them chairman of the Association of Hesder Yeshivot, chairman of the Bnei Akiva yeshivot and seminaries and head of the Ohr Etzion Yeshiva.

With coalition negotiations in full swing and with members of the Religious Zionist Party frequenting his home in Merkaz Shapira, we paid a visit to the rabbi to hear what direction he believes the country should take in the coming years once the new government has formed.

“This time the elections were very successful, and I am sure that the Religious Zionist Party will receive a very significant portfolio,” said Drukman when asked what portfolio he would recommend to RZP leader MK Bezalel Smotrich.

Whether that should be the defense portfolio or another portfolio, he refused to say.

“I won’t go into the issue of portfolios,” said Drukman. “Everyone knows what the significant portfolios are; perhaps on previous occasions, the religious Zionists were taken for granted, but I assume that this time that won’t happen.”

Q: This week, Chief Rabbi Yitzchak Yosef and [Otzma Yehudit Party leader Itamar] Ben-Gvir both spoke out against reform conversion. Ben-Gvir declared that he planned to legislate a conversion law that will determine that only conversions made according to Halachah would be allowed. In the wake of his comments, Israel Hayom reported that Diaspora Jewry would be enraged by such a step and are threatening a split between world Jewry and Israel. As a former head of the Conversion Department, do you support the State of Israel recognizing halachic conversions only?

A: I support exclusivity for halachic conversion. Unfortunately, Diaspora Jewry suffers from very high levels of assimilation. If this continues, I don’t know what will happen and what will remain of Diaspora Jewry. What can we do if they are angry? We can say to them that the majority thinks otherwise.

(At the same time, however, the rabbi says, contrary to the position of Smotrich, that he still supports allowing local rabbinical courts to conduct conversions—a proposal raised by the former religious affairs minister, Matan Kahana, with the aim of opening the “conversion market” to competition so that persons undergoing conversion will be able to do so with the rabbi of their choice while undergoing a halachic conversion.)

A: There are things where I believe that the way to act is to sit and do nothing, so that you wait and see how things progress. These are sensitive issues, and if you touch them things might not work out for the better. Let things go on as they are. I don’t know if his initiative causes damage or not. There is no reason to raise the issue of kashrut again. There is no problem with cash kashrut. I’m sorry, it’s really much ado about nothing. Conversion, I can understand, but kashrut is over nothing. I welcome the annulment of these changes.

Q: In the wake of the election, many secular people fear that we are heading toward a halachic state governed by Jewish religious law. Is that what you want?

Q: In other words, you support there being no public transport on Shabbat?

A: That’s right, I would like to see public transport on Shabbat canceled. Of course. Many years ago, I met someone who as part of his business dealings would meet with Christian priests. Once, he was asked in parliament what constitutes a Jewish state. At first, he said that it is a moral state. But then one of the priests said to him that his country was moral as well. In the end, he said that in Israel, the trains don’t run on the Sabbath. The priest jumped up and said, “That’s a difference. The fact that the trains don’t work on the Sabbath expresses the Jewish state.” I believe this with all my heart, not because it’s written in the Torah, but because for me Shabbat is something different. I say this to non-religious Jews as well: “Spend time with your family once a week, talk together without phones or other distractions.”

Q: There are a lot of people who are very angry that you want a halachic state.

A: I know that they don’t understand what we are talking about and fear what may be done to them. Perhaps they think they will be forced to wear a shtreimel. Really, it’s ridiculous.

One of the factions of the Religious Zionism Party is Noam, which wants to reverse measures taken to improve the situation of the gay community. Drukman said in this context that he doesn’t want to talk about anyone personally, but added, “What I will say is that sometimes this separationism bothers me. This ‘me, me, me.’ … But I agree with the essence of this. Some people would say that what has been done in Israel is reverse coercion when it comes to ‘parent one’ and ‘parent two.’ Mother and father is something that has existed for generations, so we change that because somebody wants something new? It is those that want to change who are coercing. There is something in Noam’s definition of ‘craziness.’ Why change, what’s the logic?”

A: The point of comparison isn’t soldiers, but rather university students. Do you know how much a student costs the state? I have nothing against it, but it costs a lot of money, and nobody says a word. But suddenly if someone studies Torah, then he’s robbing the state. It’s quite simply a question of perspective. We have to educate, to show the value of studying Torah. Look at the Hesder yeshivot. This is something wonderful, a combination of Torah study and significant military service. Some people attack them because they supposedly serve less, but that’s looking at the half-empty glass. It’s looking at it the wrong way. After all, they could take the “our Torah is our belief” approach [which grants effective exemption, which many Haredim opt for — H.G.] and study all the time. But they want to do significant military service. You have to understand that this is a very special creation. I see them as the soldiers of King David.

Q: Ultra-Orthodox MKs are demanding a judicial override law against the High Court of Justice. Where do you stand on the question of the status of the Supreme Court?

A: The court has great value, but within certain limitations. There is a need to create boundaries, and we have seen that these boundaries have been transgressed. There was a thought that the court is the master of all. That is not the situation; we need a sense of proportion. I support judicial oversight. It cannot be that after every ruling of the court everyone has to stand to attention. In a democratic country it is the public that decides.