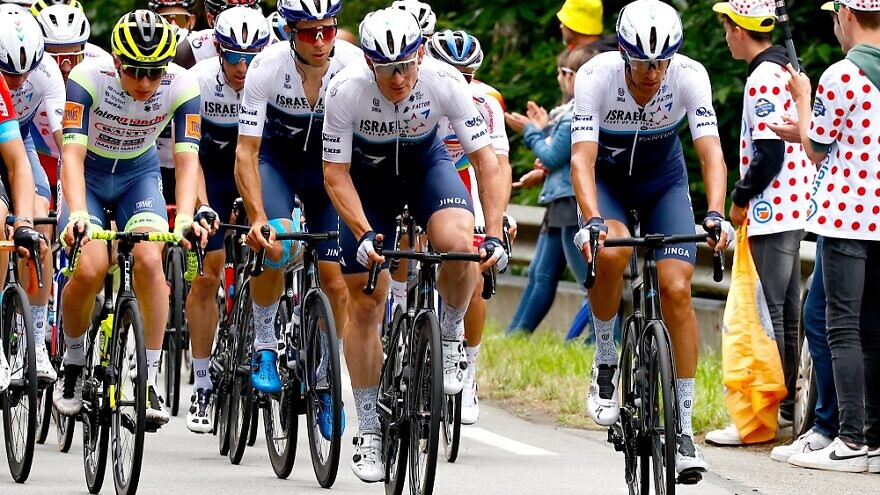 (June 30, 2021 / JNS) Days before the start of the annual Tour de France, cycling’s most prestigious race, the Israeli national team’s star rider and four-time winner of the event, Chris Froome, was enthusiastic and optimistic.

Froome has been working hard to return to his previous level of performance following the severe injuries he sustained in a 2019 crash that occurred while he was previewing the time trial course at the 2019 Critérium du Dauphiné. He suffered a double femur fracture to his right leg, multiple additional fractures and a collapsed lung.

Yet in the “Israel Start-Up Nation” team’s pre-Tour de France press conference, Froome expressed hope that this year’s Tour de France, held from June 26-July 18, “will be a steppingstone to get to my formal level of racing. I am really hoping to be on the starting line and put my recovery process behind me.”

Little did Froome know that a few days after those comments, he would be involved in another, highly preventable crash. On the first day of the Tour de France, a spectator stepped into the path of the riders to unfurl a sign, causing a massive pileup of cyclists. Consequently, seven of eight riders for Israel Start-Up Nation crashed in Stage 1 of the race.

Froome did not sustain any broken bones and the new injury was to his left leg, not the one fractured in 2019. He experienced swelling and bruising to his left inner thigh. He also slightly injured his thorax, which initially affected his breathing. He underwent scans and checks until 1 a.m. and was able to resume riding in Stage 2.

In regard to his left leg, Froome reported, “It’s pretty swollen and pretty painful, it hurts when I stand up but it’s alright. I was able to get through today and if I take it one day at a time, I can try and survive until the time trial. Then I can maybe take it as a recovery day. I hope to come round and give more to the team over the next week.”

Ultimately, all of the Israeli team’s riders completed Stage 1, with experienced Tour de France rider Guillaume Boivin ranking as the team’s best finisher in 31st place. After the stage, Boivin recounted, “My teammates had told me that the first day would be hectic and they were right on the money on that one. For sure, it’s not ideal to start a Grand Tour like this, but we also have to remember that this is a three-week race….We have to put this behind us and look forward. There is still a lot of racing to come.”

Israel Start-Up Nation bounced back during Sunday’s second stage. Michael Woods, the team’s leader, was true to his word from the pre-race press conference. At the time, he reported, “I think I can be quite competitive. I am one of the stronger climbers on the world tour.” Indeed, he was competitive on the climbs and on the uphill finish of Stage 2 on Mûr-de-Bretagne, though he acknowledged the day was tough and that he was shaken up by Saturday’s crashes.

“Mentally, it was a struggle out there today,” Woods said Sunday. “After the crash yesterday, I was pretty scared all day. However, my legs felt really good. When Van der Poel took off, I was a little too far back. I tried attacking but I didn’t want to play the GC (general classification) game, so when the win wasn’t an option anymore, I just sat in. Still, I’m really happy to bounce back like this and see that I’m able to climb with the best guys. This gives me a lot of confidence for the mountain stages.”

Woods finished Stage 2 race in an impressive 11th place. He is humbled to be leading the Israel-Start Up Nation team, saying, “If you had told me earlier in my career I’d be leading a national team, I wouldn’t have believed it.”

Stage 3, from Lorient to Pontivy, also featured several crashes — but the Israeli team was not involved in them. Boivin was the team’s best finisher, in 23rd place. Israel Start-Up Nation’s sports director, Rik Verbrugghe, said Monday, “Today was a really nervous stage, especially towards the end…but the good thing is that we passed this stage without any crashes. Now, we look forward to tomorrow.”

On Tuesday, on the 150 flat kilometers (93 miles) from Redon to Fougeres, Israel Start-Up Nation was blessed with its first top 10 result in this year’s Tour de France.  André Greipel was 10th in the bunch sprint on stage 4.  Teammates Rick Zabel and Boivin Guillaume finished 15 and 21 respectively.