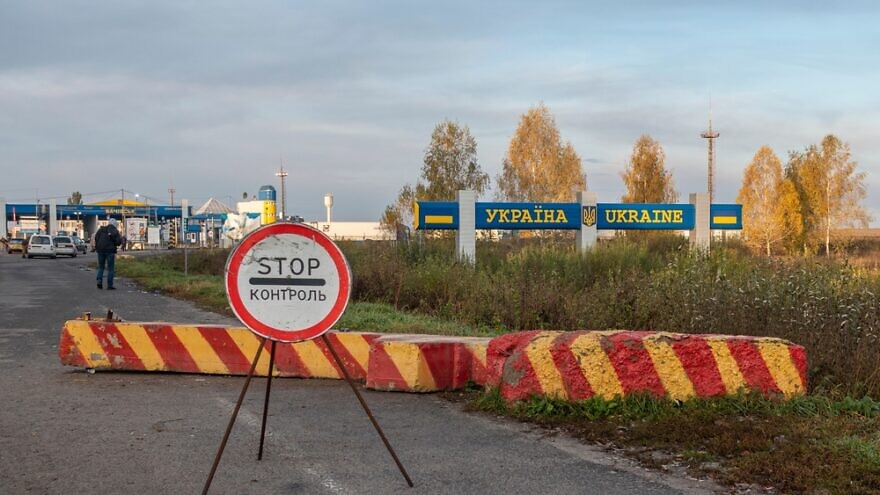 (January 31, 2022 / JNS) A possibly imminent invasion by Russian troops into Ukrainian territory has the world on edge as leaders and experts try to guess Russian President Vladimir Putin’s next steps and prevent what could become the largest military action in Europe since World War II. For Israel, the focus and concern lies with Ukraine’s Jewish community in its Donbas region, where Jews have lived relatively free and safe. Now, their lives could be in mortal danger as they will be caught in the crossfire if war breaks out between Ukraine and Russia.

The Israeli government last Sunday convened a number of top officials to discuss contingency plans on the immediate absorption of Ukrainian Jews should the urgent need arise. Jewish organizations estimate that some 75,000 Ukrainians living in the eastern part of the country—many of them elderly—are eligible for Israeli citizenship under the Law of Return, which allows immigration to those who have one Jewish grandparent.

He said he hopes not to see a military incursion, but acknowledged that the decision “all comes down to one person.”

So sure are Ukrainians that Russia will launch an attack that even civilians are taking up arms to protect their homeland.

Western nations, however, are still trying to determine whether Putin is serious or not.

While U.S. President Joe Biden sent a strong signal to Russia threatening that he would unleash sanctions against it should it invade Ukraine, he seemed less sure about predicting the future during a press conference in the White House back on Jan. 19. At first, Biden appeared to demonstrate his belief that Russia will cross the Ukrainian border, saying, “My guess is he will move in,” but later seemed to waver when he said “I don’t think he’s made up his mind yet.”

If Putin does decide to invade Ukraine, Biden warned that “he’ll pay a serious and dear price for it.”

U.S. Deputy Secretary of State Wendy Sherman seemed more certain about her prediction, saying on Jan. 26 at the Yalta European Strategy event via teleconference that the United States believes Putin remains poised to move against Ukraine sometime in the coming three weeks.

“I have no idea whether he’s made the ultimate decision, but we certainly see every indication that he is going to use military force sometime perhaps [between] now and the middle of February,” she said.

At a news conference at the Pentagon on Jan. 28, Gen. Mark Milley, chairman of the Joint Chiefs of Staff, also acknowledged the high probability of a Russian offensive, noting that more than 100,000 of its troops—and supplies—are positioned at the Ukrainian border, including ground, naval and air forces, special operators and personnel trained in electronic warfare, cyber warfare, command and control, and logistics.

Israel has a good working relationship with both Ukraine and Russia, and so due to the sensitivity of the issue and not wanting to offend either party or be seen as taking sides, officials are treading carefully. 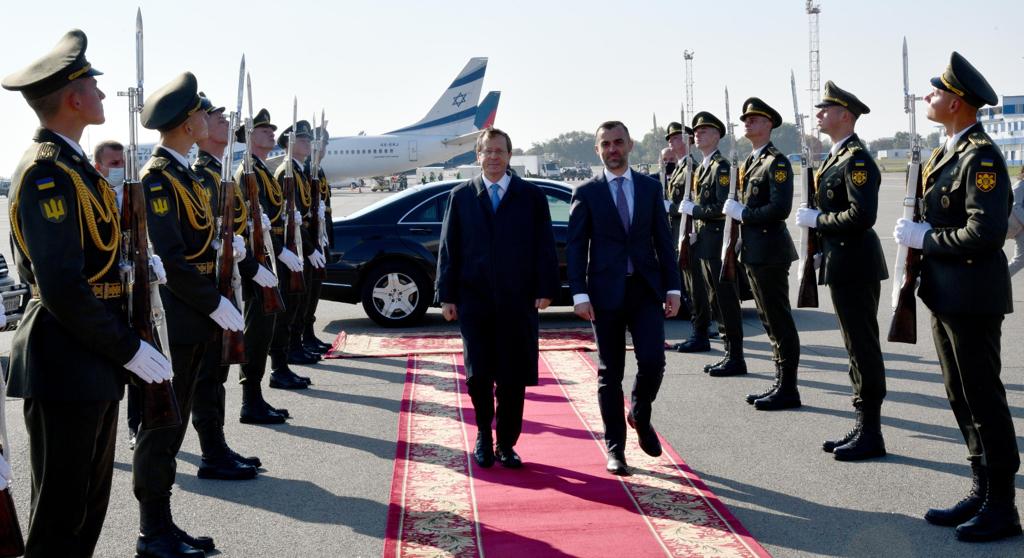 Israeli President Isaac Herzog is greeted by an honor guard upon his arrival in Ukraine, Oct. 5, 2021. Photo by Haim Zach/GPO.

‘There is total paranoia’

Ze’ev Khanin, of the department of political studies at Bar-Ilan University and currently a visiting professor in Israel Studies at Potsdam University, told JNS that Israel is not interested in the conflict escalating since it might be forced to choose sides.

He also said an escalation “may increase Russia’s interest to react to the American sanctions in other areas that are sensitive to American interests, like Syria.”

This could “harm or even abort Moscow-Jerusalem understandings over Syria and limit Israeli activities there,” said Khanin.

For the past several years, Israel has carried out numerous missions in Syria, many according to foreign reports, in an effort to block Iran’s attempt to use Syria as a forward base and a land bridge to deliver sophisticated game-changing weapons to its Lebanese Shi’ite proxy Hezbollah.

Khanin believes that concern over the Jewish community in Ukraine “is a little exaggerated in the media since the Jewish dimension of the crisis is limited.”

He said that while the evacuation of Jews is not a part of the Ukrainian public and media agenda, the number of people who have approached the Jewish Agency for Israeli in Kyiv has doubled, according to local sources.

Khanin said the prevalent reason for this spike lies more along the lines of “just in case.”

‘The mother of all sanctions’

Anna Geifman, a senior research fellow in the Department of Political Studies at Bar-Ilan University and professor emerita at Boston University, told JNS that while Ukrainians are justifiably worried, Russians appear to be denying that any offensive is in the air.

She quoted a colleague of hers who said “there is total paranoia. No one is doing anything.”

Geifman said that Russian citizens seem to believe the West is “paranoid,” but she believes this is “a classic Russian reaction.”

She also looked at the situation from Russia’s point of view, saying “I really don’t see why not,” of Putin’s possible intention to invade Ukraine. The Russian leader says he has no plans to go in, but he could come up with a casus belli to do so by inventing a provocation or using a minor incident as an excuse.

Putin is threatening to attack over concerns that Ukraine might be admitted into NATO. As such, the United States and the European Union have pushed back against Putin’s demand, with Sen. Bob Menendez (D-N.J.) preparing, as he noted, “the mother of all sanctions.”

Geifman said there is nothing deeper here other than the fact that he wants the territory of Ukraine back as part of Russia. She also said there is an important need to understand the Russian mentality in order to understand why Putin is doing what he is doing.

According to her, Putin believes that Russia is superior to the West and that the Russian way of life is the right way. The idea that Russia is saving the world is “ingrained” in Putin’s mind, she said.

Geifman explained that for Putin, after the embarrassment of the Soviet Union’s disintegration and subsequent years of self-perceived Russian weakness on the world stage, he is “building a new identity for the Russians.”

As for the Jewish community in Donbas, Geifman was skeptical that Israel could truly engineer any sort of evacuation, especially since there are so many Jews there. She did, however, note that anyone who wanted to move westward to safer parts of Ukraine could do so, as many Jews did in the 2014 revolution.

“If Putin has done one thing,” Levin observed, “he has been able to unite the country in a way almost no one else has—and that includes the Jewish community.”