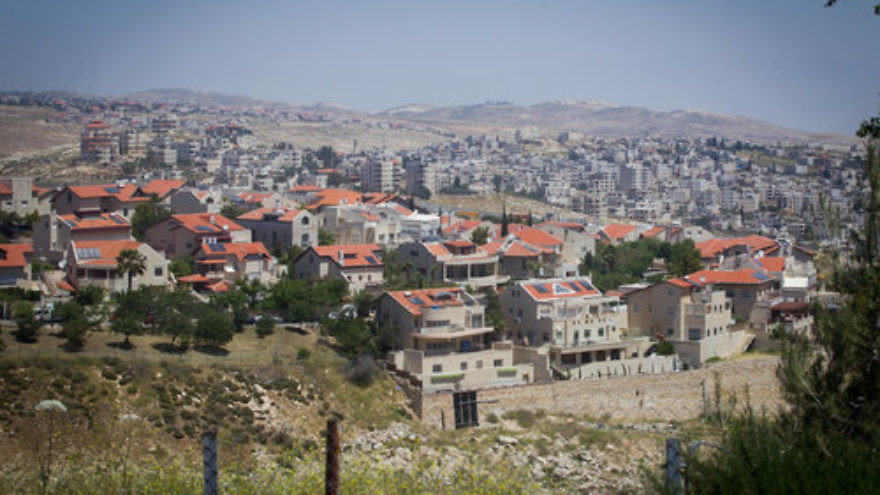 A view of the Jerusalem neighborhood of Pisgat Ze’ev. Such Jewish neighborhoods are usually referred to as being located in “east” Jerusalem, yet they are also in the city’s northern and southern sections, with Pisgat Ze’ev situated in north Jerusalem. Credit: Miriam Alster/Flash90.
Republish this article
1008 WORDS
Spread the word.
Help JNS grow!
Share now:

Many such construction announcements had been frozen for several years due to strong opposition from former U.S. President Barack Obama and the international community. Yet the new administration of President Donald Trump did not criticize last week’s approval of new Israeli construction in Jerusalem and in the West Bank, with White House Press Secretary Sean Spicer saying in a briefing that “Israel continues to be a huge ally of the United States,” without directly addressing the construction issue.

Jerusalem policy expert and veteran Israeli journalist Nadav Shragai, a senior researcher at the Jerusalem Center for Public Affairs, contended that the newly announced Jerusalem housing units are in already-large, well-established Jewish neighborhoods, and that the new buildings will not shift the demographic borders between Jewish and Arab communities within the city.

“Building these apartments has no impact on the possibilities for a Palestinian state,” Shragai told JNS.org, noting that “over 220,000 Jews live in what is known as east Jerusalem, compared to 340,000 Arabs.”

In December, the United Nations Security Council passed Resolution 2334, which included “East Jerusalem” in its condemnation of Israeli settlement activity. The measure claimed that Jewish building in disputed territories captured by Israel in the 1967 Six-Day War has “no legal validity” and is “a flagrant violation under international law.” The Obama administration enabled the resolution’s passage by refusing to use American veto power in the Security Council.

After being attacked by Jordan in 1967, Israel conquered all territories to the east of the so-called “Green Line,” including the West Bank (known commonly in Israel as Judea and Samaria) as well as eastern sections of Jerusalem containing the Old City and the Mount of Olives Jewish cemetery.

While Israel applied limited sovereignty over the territories of the West Bank following the Six-Day War, Shragai explained that the Israeli government officially annexed the reunited sections of Jerusalem and immediately “applied Israeli law to eastern Jerusalem”—a distinction that is not recognized by the majority of the international community, and the reason why most countries have refused to house their embassies in Israel’s capital city.

In March 2010, the Obama administration issued a harsh rebuke of Israeli Prime Minister Benjamin Netanyahu over announcing approvals for new construction during a visit by then-Vice President Joe Biden.

Many in Israel are hopeful that the Trump administration will shift America’s longstanding view on construction in the disputed territories and recognize Israeli sovereignty over all of Jerusalem.

In response to questions regarding the new building announcements, Jerusalem Mayor Nir Barkat told reporters, “We’ve gone through eight hard years of Obama, who pressed to freeze construction…I hope that era is over and that from now on we will continue to build and develop Jerusalem for the good of its residents, Jews and Arabs alike, in order to strengthen the sovereignty over a united Jerusalem as capital of Israel.”

Where is east Jerusalem?

Today, the distinction today between areas Israel captured in 1967 and those it first controlled in 1948 remains sharper among Israeli politicians and international activists than it is among the actual residents of the cities in question.

“What is referred to as east Jerusalem,” Shragai said, “is not only the eastern sections of the city.  It is north, south and east; anything that is over the Green Line.”

According to Jerusalem City Council Member Arieh King, a supporter of Jewish building in the eastern sections of the city, the new construction announcements have less to do with issues of applying Israeli sovereignty and more to do with helping to alleviate a severe housing crisis.

“There is a great need for more apartments in Jerusalem,” King told JNS.org. “Jerusalem is one of the most expensive cities in Israel, it is the largest city. But we are not building the way other cities are building. As a result, the city is becoming very expensive. Young couples are leaving the city because they cannot afford the prices of apartments.”

“There is a deficit of apartments in the entire city,” echoed Shragai. “Jews who live in Jerusalem, in west and east, need more apartments.”

Shragai said the new construction announcements in what is considered east Jerusalem came at this time because “there are more available plots for building.”

Yet according to King, the announcements do not represent new master plans for Jewish housing in eastern sections of the city, and he does not believe that the Israeli government nor Mayor Barkat are prepared to make sweeping announcements on any dramatic plans to provide thousands of new homes.

“These are announcements about old plans,” said King. “There has been no announcement or discussions of any new plans. I don’t see any change, unfortunately.”

King suggested that domestic and international politics are impeding building in sections of the city that Israel has now controlled—in its entirety—for 50 years.

“When we are talking about building on the western side of the Green Line, there usually isn’t any discussion,” he said. “But when we are talking about neighborhoods—with nearly a quarter million Jews—like Gilo, Har Homa, Armon HaNatziv, French Hill, Pisgat Ze’ev, Neve Yaakov, Ramat Shlomo and Ramot, the number of new construction projects is nothing compared to what is needed.”

King added that “there is enormous potential. There are so many places to build in the southern and northern sections of the city. There could be tens of thousands of new apartments.”