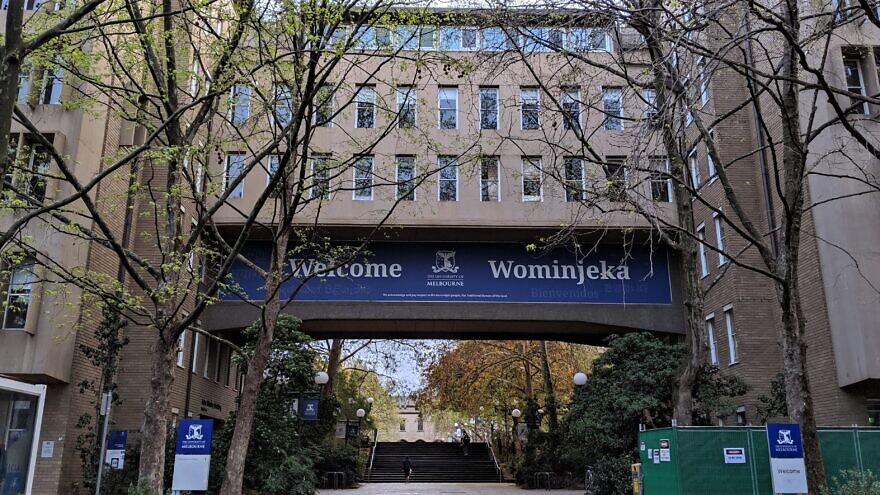 (August 15, 2022 / JNS) Jewish groups in Australia are speaking out after the University of Melbourne student union approved an anti-Israel, pro-BDS measure on Monday, just weeks after the group removed a similar measure from consideration.

According to the Herald Sun, the anti-Israel resolution stated the students opposed the “use of Zionism to justify the illegal occupation of Palestine as racist and colonial” and called for the support for Palestinians to “engage in self-defense against their occupiers.”

The measure passed by a vote of 13-3, with one abstention.

The Australasian Union of Jewish Students, which represents Jewish groups at universities in Australia and New Zealand, issued a statement saying they are “disappointed” by the passing of a BDS measure.

“Campus must be a place where respectful dialogue flourishes,” the group tweeted. “It is impossible to fit all the complexities and narratives of the Israeli-Palestinian conflict into a student council motion. Instead of promoting dialogue and understanding, this motion misrepresents Zionism and oversimplifies the conflict, which will lead to the targeting and harassment of Jewish students who want to embrace their identity at the University of Melbourne.”

The group continued, writing: “We should feel safe to be proud Jews and Zionists on campus, however, without nuanced conversations, respect and a desire to understand and learn, Jewish students feel unwelcome and isolated. We call on the University of Melbourne Student Union and the students at the University of Melbourne to engage in dialogue and advocate for peace, not tokenize, isolate and target your Jewish peers.”

“It is disingenuous to suggest that this motion is simply about criticism of the Israeli government or support for the Palestinians,” the agencies said in a release. “It effectively advocates the eradication of Israel as a state and thus denies the basic right of national self-determination of the Jewish people. The motion is imbued with racism, and its language drips with venomous hatred.”

The release went on to say that “when student representatives falsely deny the Jewish connection to Israel, they deny to Jewish students the right to their own identity. When they promote hatred of Israel so unrelentingly, they are telling Jewish students and faculty that they don’t belong on campus unless they willingly forego their own identity. Only one country is singled out. Only one ethnicity is vilified.”

The agencies concluded: “This has real-world implications. Jewish students are facing increasing intimidation, including death threats, and a planned stabbing.”

In late May, the University of Melbourne Student Union removed a BDS measure after a non-Jewish law-school student threatened to file a lawsuit, claiming the measure violated the country’s Racial and Religious Tolerance Act.