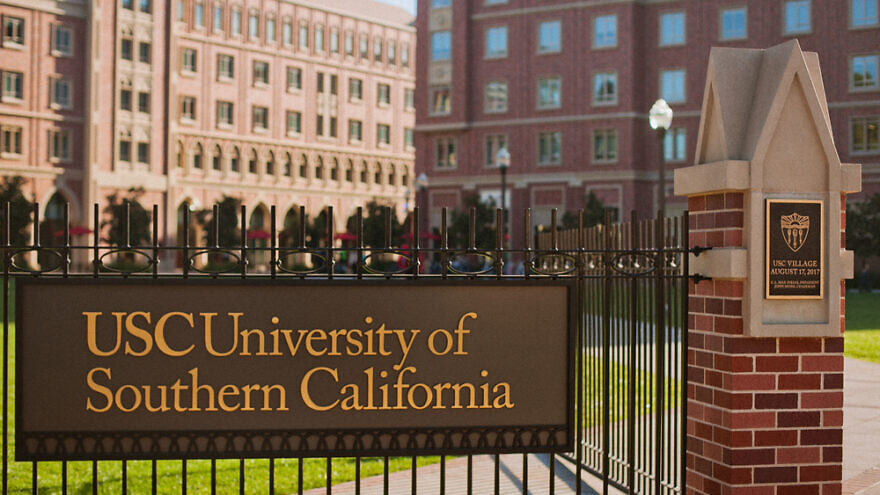 (December 30, 2021 / JNS) After the University of Southern California was included in the Simon Wiesenthal Center’s Global Anti-Semitism 2021 Top Ten list, the school responded on Wednesday by condemning both anti-Semitism in all its forms and the threatening tweets by a student leader that led to the distinction.

USC board of trustees Chairman Rick Caruso said that “the board of trustees together with [University] President [Carol] Folt unequivocally rejects antisemitism. We explicitly condemn and denounce tweets calling for the killing of Jews. This kind of hateful speech has no place at USC or anywhere in society.”

While USC is one of many universities around the country facing criticism for its handling of anti-Semitic incidents, it was the only university included in the Simon Wiesenthal Center’s list because, according to the organization, its administration “consistently failed to act effectively against overt Jew-hatred.”

On Dec. 1, a group of more than 60 USC faculty members sent an open letter to university leadership, highlighting the uncovered tweets of USC Viterbi School of Engineering student Yasmeen Mashayekh from the spring and summer.

In the profanity-laced tweets, which the university said were deleted before the start of this school year, Mashayekh wrote that she wanted to kill every Zionist, called for the death of Israel and the U.S., and cursed the Jews.

Mashayekh serves as one of the school’s diversity, equity and inclusion (DEI) senators, an elected student position established to promote “greater inclusivity” and “advocate against racism and discrimination.”

The faculty members, which included high-level professors, department heads, deans, Nobel laureates, Academies of Science members and even the namesake of Mashayekh’s engineering school, called for her statements to be publicly and explicitly condemned by the university leadership.

“The campus community needs to know the name of the offender and the essence of the offense,” the open letter stated. “We urge you to condemn the hateful content of these statements and to reaffirm that such views are contrary to USC’s values.”

The faculty’s letter also reminded the administration of the personal attacks against former vice president of USC’s undergraduate student government, Rose Ritch, for identifying as a Jewish Zionist, leading her to resign from her position. The letter also noted the public endorsement of a pro-Palestinian statement by one of the university’s departments. According to the professors, the administration failed to address these and other incidents.

“Most importantly, Jewish, Zionist, and Israeli students, as well as those who support the right of the State of Israel to exist, need to hear from our leaders that they are welcome on our campus,” the letter concluded.

In a reply to the open letter on Dec. 3, the university condemned anti-Semitism, but said it could not legally condemn any student publicly, could not monitor the social media posts of its 44,000 students and is legally unable to remove a student from an elected position such as DEI senator.

The response did note that the university had handled the matter privately with Mashayekh and that she had been removed from her mentoring role in the school of engineering.

“The university understands why students, faculty and staff have felt unsafe following a series of hateful tweets that called for violence against both Jews and Zionism, which is an important part of the identity of many Jewish people. The tweets in question violated USC’s community values and we have addressed that with the student, consistent with California law,” USC said in its most recent statement on Wednesday, adding that Jews “are an important and valued part of USC’s community.”

Anna Krylov, professor of chemistry at USC and one of the open letter’s signatories, said the most recent statement marked the first time she saw the school’s administration acknowledge that Zionism is an important part of Jewish identity. But she said the university has yet to acknowledge this position on a public platform so that it reaches students on campus.

“We are still waiting to hear whether Israeli and Zionist students and those who support the right of the State of Israel to exist are welcome on campus,” Krylov wrote in an email. “It is also not clear what concrete actions to improve the campus climate will be taken. So far we have heard a lot about various task forces but not much about actions.”

Several of the letter’s signatories were later contacted by Provost and Senior Vice President of Academic Affairs Charles Zukowski to speak privately, according to Krylov, and Folt wrote to the professors that she looked forward to having further conversations with the faculty group in January. Krylov welcomed those developments.

“Most importantly, this is what we’re asking — are we welcome on this campus?” said Judea Pearl, Chancellor’s Professor of Computer Science at the University of California, Los Angeles Samueli School of Engineering, and father of murdered Wall Street Journal reporter Daniel Pearl.

Despite working at another university, Pearl uses his experience to advise other faculty in combating anti-Jewish and anti-Zionist hate, and said that the USC president appears to be trying to avoid the issue.

“First, she couldn’t spell Zionism. Then she finally spelled it but not on an official letter,” he said, referring to Wednesday’s statement, which was only sent to media.

He said Folt may be trying to avoid mentioning Zionism because “welcoming Israelis and Zionists are taking sides in some political controversy in her mind.”

“She wouldn’t do it because she may be afraid of CAIR’s (Council on American-Islamic Relations) lawyers or maybe some other source of criticism, but that’s why she is hesitating and this is what we need here,” he said. “Zionism is not taking sides. It’s just moral imperative — and I say it very clearly — people who believe in the right of Jews to have a homeland.”

December’s open letter was not the first time the administration has attempted to get university leadership to act against anti-Semitism. The professors also published an open letter about the situation with Ritch in 2020, and earlier this year, they published a letter after the USC Gender and Sexuality Studies Department endorsed a statement in support of Palestinians that they said contained numerous inflammatory statements and distortions.

“USC leadership must move forward with concrete actions to make its Jewish, Zionist and Israeli students feel welcome on campus,” Hanna Reisler, Lloyd Armstrong Jr. chair in science and engineering in the USC Department of Chemistry, who also signed the open letter, said. “They should find a way to respond directly and forcefully to situations of anti-Semitism and anti-Zionism on campus, rather than always hide behind privacy concerns. An action plan is clearly required, and we have been waiting for a long time for it.”

Miriam Elman, executive director of the Academic Engagement Network (AEN), whose members spearheaded the letters, said that the three letters point to the urgent need for the university to come up with an action plan to address anti-Semitism on its campus.

“The administration must now move beyond statements toward concrete actions with measurable benchmarks and goals,” Elman wrote in an email. “The good news is that USC is participating along with administrators from nearly a dozen other campuses across the country in AEN’s Signature Seminar Series.”

The series, she said, was launched this fall and is designed to train university officials and staff about Jewish identity, Jewish experiences and the “multifaceted nature of contemporary anti-Semitism.”

Participants will also be provided with practical advice on how to improve the campus climate for Jewish, as well as other students on campus.

“We look forward to seeing USC’s leadership implement many of these recommendations in the year ahead,” Elman said.

USC stated in its Dec. 3 response to the third open letter that Varun Soni, dean of religious and spiritual life, had led a working group to examine anti-Semitism and was then examining recommendations. The university had also partnered with its Shoah Foundation to create the “Stronger Than Hate” initiative, which “empowers teens and young adults to recognize and counter hate in their own communities.”

So far, Krylov said that none of the professors in the letter have been asked to participate in the Stronger Than Hate program and the DEI administration has been silent on anti-Semitic and anti-Zionist incidents.