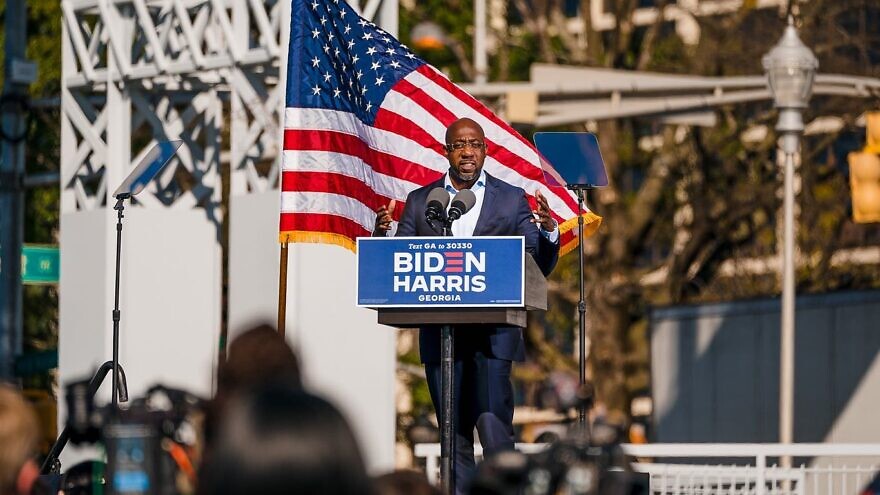 (November 6, 2020 / JNS) Georgia Democratic Senate candidate Rev. Raphael Warnock, who advanced on Tuesday to a January runoff against incumbent Republican Sen. Kelly Loeffler, signed a letter last year that likened Israeli control of the West Bank to “previous oppressive regimes” such as “apartheid South Africa” and suggested that “ever-present physical walls that wall in Palestinians” are “reminiscent of the Berlin Wall.”

The statement said the delegation came “as descendants of those who survived slavery, Jim Crow and who work now to dismantle the new Jim Crow of mass incarceration and militarization of police in our communities; and we came as representatives of the South African people who lived through the indignity of over 300 years of dehumanizing dispossession, colonialism, segregation and apartheid.”

It also sought to “better understand the realities on the ground, particularly related to the Occupied Palestinian Territories (East Jerusalem, West Bank, and the Gaza Strip).”

They toured Palestinian communities, refugee camps and “met with families who are fighting to keep their homes from being taken for Jewish settlements and developments.”

Additionally, the delegation said it “heard the stories of how Palestinians within the occupied territory of the Gaza Strip must contend with a perpetual blockade, the excessive use of force by Israel to subjugate the people in collective punishment of whole population and the debilitating confinement that renders Gaza as one big densely populated prison.”

In a statement to Jewish Insider, which first reported on the letter, Terrence Clark, a spokesperson for Warnock’s campaign, said the pastor “has deep respect for the invaluable relationship the United States has with Israel and how Georgia continues to benefit from that friendship.”

“The reservations he has expressed about settlement activity do not change his strong support for Israel and belief in its security, which is exactly why he opposes ending direct military aid to such a strong ally,” said Clark. “Reverend Warnock is proud to be a part of interfaith communities that model respect and work to seek unity instead of division; he believes people of faith working together is essential to making progress on the issues important to our families, from access to affordable health care to creating a peaceful and secure world.”

In a statement to JNS, Stephen Lawson, communications director for the Loeffler campaign, said Warnock “has a history of anti-Israel positions, from embracing anti-Zionist Black Lives Matter and defending anti-Semitic Rev. Jeremiah Wright, to calling Israel an ‘oppressive regime’ for fighting back against terrorism.”

In accordance with Georgia electoral law, if no candidate gets at least 50 percent of the vote, a runoff between the top two finishers will be held on Jan. 5.

Warnock, pastor of the historic Ebenezer Baptist Church in Atlanta, and Loeffler fended off Republican Rep. Doug Collins and other Democrats.

The winner would serve the remaining two years of Republican Sen. Johnny Isakson’s term after he retired in 2019 for health reasons. Loeffler was appointed by Georgia Gov. Brian Kemp.