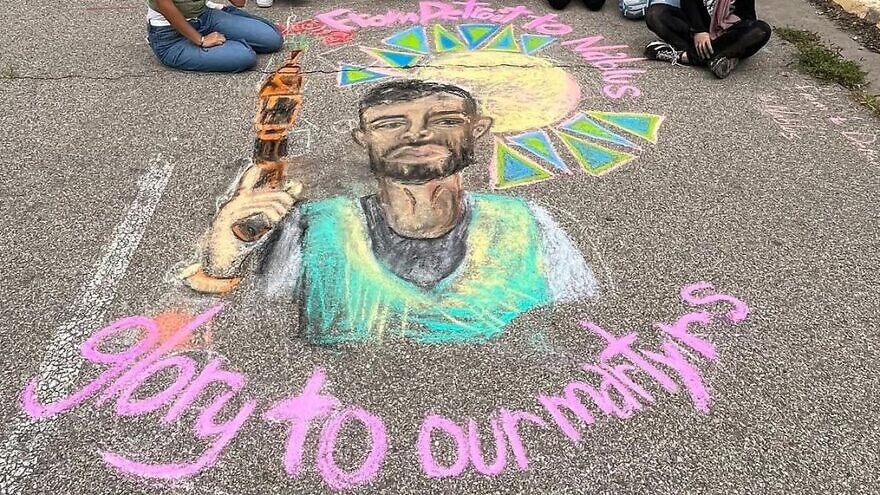 The Instagram graphic, posted by the student group on Aug. 9, featured what some believe are Nabulsi’s final words: “Keep defending our homeland after I’m gone.” The graphic was originally designed by the Palestine Youth Movement.

“To our martyr, Ibrahim Nabulsi, the Lion of Nablus, who was brutally murdered today by the Israeli Occupation Forces, rest high above,” stated Wayne State University SJP’s caption.

The United States, European Union, Israel, Canada and New Zealand consider the Al-Aqsa Martyrs’ Brigades to be a terrorist organization. The U.S. State Department has designated it a Foreign Terrorist Organization.

In a statement shared with JNS, Wayne State University declined to comment on the SJP’s social-media posts, saying it  “does not control what student groups post on social media nor does any student group represent the university.”

Wayne State University SJP and the National SJP did not respond to requests for comment.

The club hosted a chalking event on Saturday in Detroit, where they drew pictures of art related to the Israeli-Palestinian conflict on the pavement. One drawing seemingly depicted Nabulsi holding a gun with the words “from Detriot to Nablus, glory to our martyrs.”

On Friday, Ohio State University’s SJP chapter honored Nabulsi at a vigil, calling him a “martyr.”

“We will be honoring our martyrs Ibrahim Nabulsi, Hussein Taha, Islam Soboh and Momen Jaber. Please join us as we continue to fight and stand for justice in Palestine,” said the group when promoting the event in a post, calling on participants to bring “signs, flags and keffiyehs” to the demonstration.

Demonstrators at the vigil shouted anti-Israel slogans such as “From the river to the sea, Palestine will be free!” “Long live the intifada!” and “From Columbus to Gaza, mobilize the intifada!”