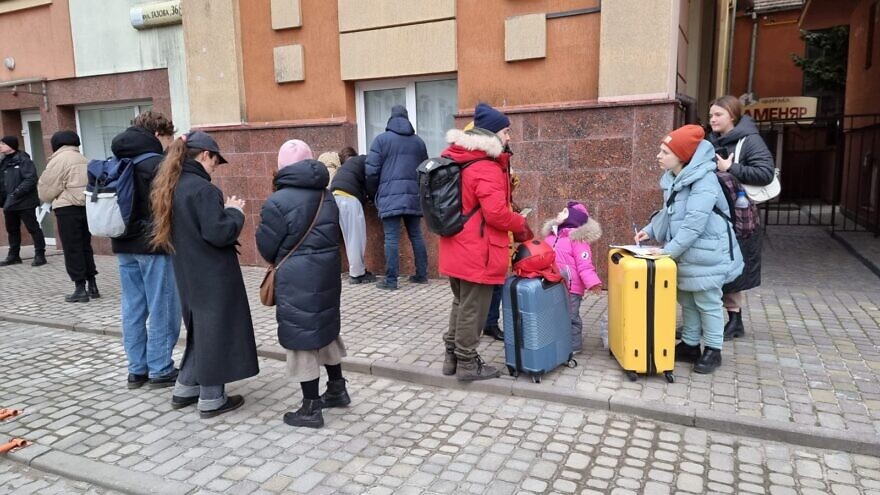 (March 1, 2022 / Israel Hayom) As the Russians renewed their assault on Kharkiv Monday, Katerina (28, a quality assurance engineer), Yevhen (27, a programmer) and Ludmila (54, a yoga teacher) arrived in Lviv after five days on the road from Kharkiv.

They stopped a few times on the way, staying with friends and acquaintances. After arriving in Lviv, they made their way to friends’ homes, where they plan to stay until they can make up their minds what to do—head for a neighboring country or stay in Ukraine. Some of their relatives stayed behind in Kharkiv.

“They weren’t sure what was more dangerous—staying or going,” said Katarina, on the verge of tears. “Sometimes we are able to get them on the phone, and it seems like they’re still all right,” she adds.

Ludmila said that “the Russians surrounded the city on two sides,” and that “from the windows of my apartment, I could see the bombing coming closer to the city, and during one of the lulls we decided to flee.”

Yevhen said, “The explosions were so strong that I could hear them for days.” He covered his ears as if he could still feel the vibrations. “The situation is terrible, just terrible.”

Yelena, in her 30s, is standing outside a home in central Lviv, holding the hand of her eight-year-old son, surrounded by parcels, blankets and bunches of clothes she is taking out of her car.

“We left Kyiv two days ago. It wasn’t the traffic that held us up, it was that there wasn’t any more gas in gas stations along the way. Only in the Lviv district is there still gas. We had to ask people for a little gas,” she said. “The situation is awful. My sister lives here [in Lviv]. My youngest daughter is in Poland. We heard about the long wait at the border crossing. We would have wanted to cross over to Poland to be safer, but it’s not easy. We never imagined we’d find ourselves in this situation,” she added.

Lisiy, 32, and Katya, 38, both work at the Kyiv airport, and live nearby. On Monday evening, they reached Lviv after a day and a half on the roads, with their young children. They immediately noticed that I was taking down their words in Hebrew.

“We work a lot with Hassidic [Jews],” they said, and tossed out a few Hebrew expressions. Both their husbands volunteered to fight, “for our children’s future.”

“The grandmothers stayed behind, even though the Russian forces were moving closer, because the potato season just started and they didn’t want to miss it—war or no war,” they said.

Lviv, the largest city in western Ukraine, gives the influx of refugees a certain sense of normalcy after the hell they have been through. Despite occasional sirens, the city has not yet come under assault. Still, the war is felt. Most shops and businesses are closed, other than supermarkets, liquor stores, pharmacies and a few banks. Many ATMS have been emptied, and there are long lines at the ones still dispensing money.

Both locals and new arrivals can be seen hauling bags of food and bottles of water. The comparative calm is mixed with the difficult feeling that it could all end at any minute.

“We don’t know what will happen,” said Igod, a television broadcaster from Kyiv who moved to Lviv with the rest of the staff at the TV station where he works.

“I left my home in Kyiv with the sense that I didn’t know if I’d ever be able to go back to it. It was a terrible feeling. No one thought the Russians would attack. Even Thursday morning, the first day of the war. It’s not clear what Putin is thinking and how real his nuclear threat is. We have no idea what the day will bring,” said Igod.

Max and Roman, two 17-year-olds from Lviv, are still in high school and are frustrated that they are too young to join the war. Even the civil defense won’t take them, although they would very much like to fight for their country. Still, they think that the battles will die down in the next few days, either thanks to the “peace talks” or because Putin will drop an atomic bomb.

“Is he really capable of doing something like that?” I asked the boys.