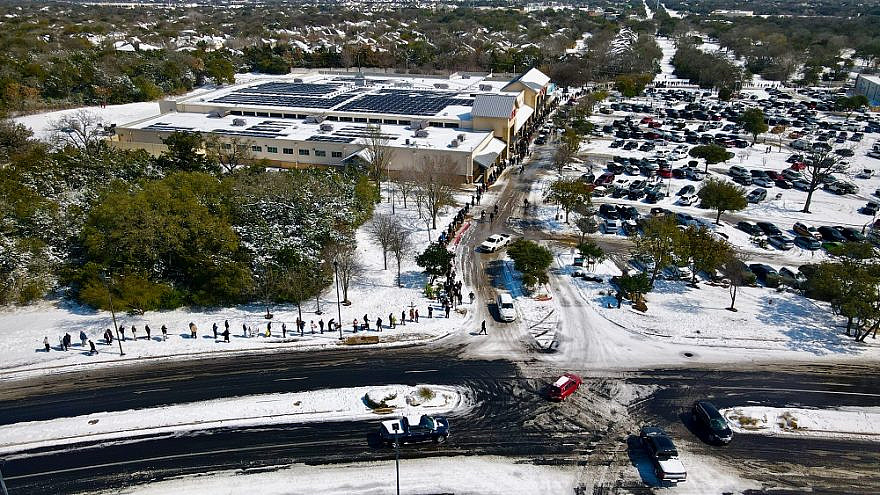 (February 19, 2021 / JNS) On any given day, people coming into the Kosher Palate in Dallas do so know they are going to be spending money on groceries or prepared foods. This past week, however, hundreds of people were treated to free hot meals made by the staff of the supermarket/catering company amid a week of brutally cold winter weather.

“My husband being the kind of guy he is, he likes to feed people, and he said there are people who are at home and no way to get hot food, so we have to feed them,” said Miriam Goldfeder, who along with her husband, Chaim, own Kosher Palate. “That was Tuesday night, and we have fed about 1,000 people each night since. I saw people who came in that I have never seen before.”

Goldfeder, who also opened their home to family friends who had no heat, explained that “we have a full kosher kitchen, so we have the cooking capability, as well as cases full of meats and chicken. Plus, we are preparing for Pesach, so we have more on hand than usual.”

A GoFundMe account was established to help offset the costs of the meals. The Jewish Federation of Greater Dallas also contributed funding and arranged for three communal food distribution sites in different parts of the city.

Both initiatives have allowed the Goldfeders to supply even more food—as of now, the plan is to provide meals at least through Shabbat. The GoFundMe effort proved so successful that the couple has been able to set aside some of the funds to provide Passover items to Jews in need, as well as sending funds to help people in Austin who are in need.

Additionally, a truck filled with additional kosher-food provisions for Shabbat arrived in Dallas on Friday from the Lev Rochel Bikur Cholim—a Jewish organization in Lakewood, N.J.—while a chef friend of Chaim Goldfeder flew down on Thursday morning from his home in New Jersey to help with the on-site cooking. 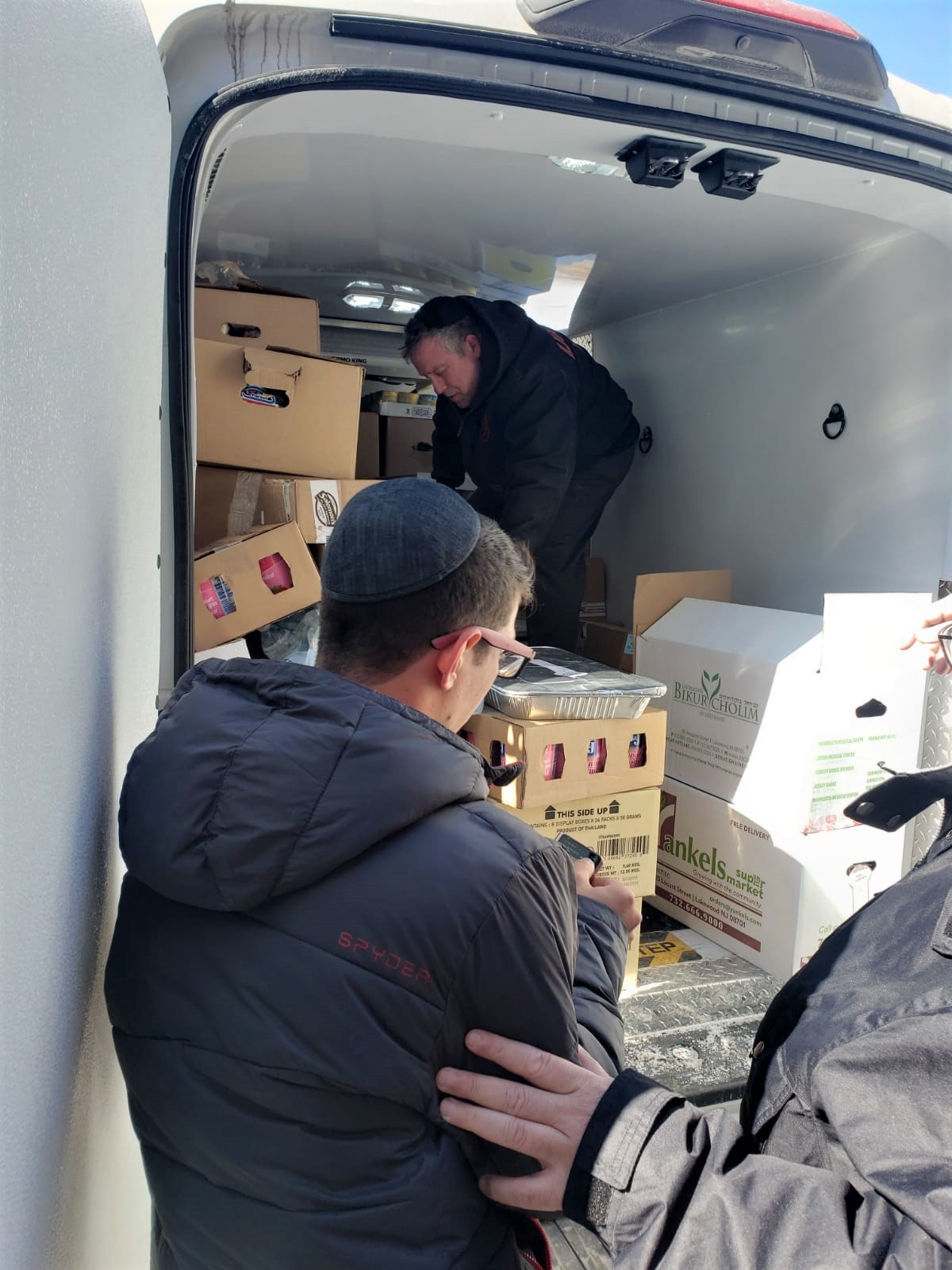 A truck filled with kosher-food provisions for Shabbat arrived in Dallas from the Lev Rochel Bikur Cholim, a Jewish organization in Lakewood, N.J., Feb. 19, 2021. Credit: Courtesy.

A massive plunge of arctic air and winter storms throughout Texas knocked out power for nearly 4.5 million residents this past week as the state’s power grid was unable to keep up with demand brought on by the record cold. Power-generation stations and the electric grid in Texas—separate from the rest of the country, and as such, unable to get help from neighboring states—were not properly winterized to handle the below-freezing temperatures. The precipitation made travel outdoors dangerous while indoors, water pipes froze and then ruptured, sending floods cascading down walls and through ceilings. At least 30 people have died since last Sunday from the cold.

The weather is expected to return to normal in the region by next week, which should reduce the strain on the power grid, and melt the snow and ice. Already, power has been restored to much of the state, although clean water and even food in some areas remain scarce. 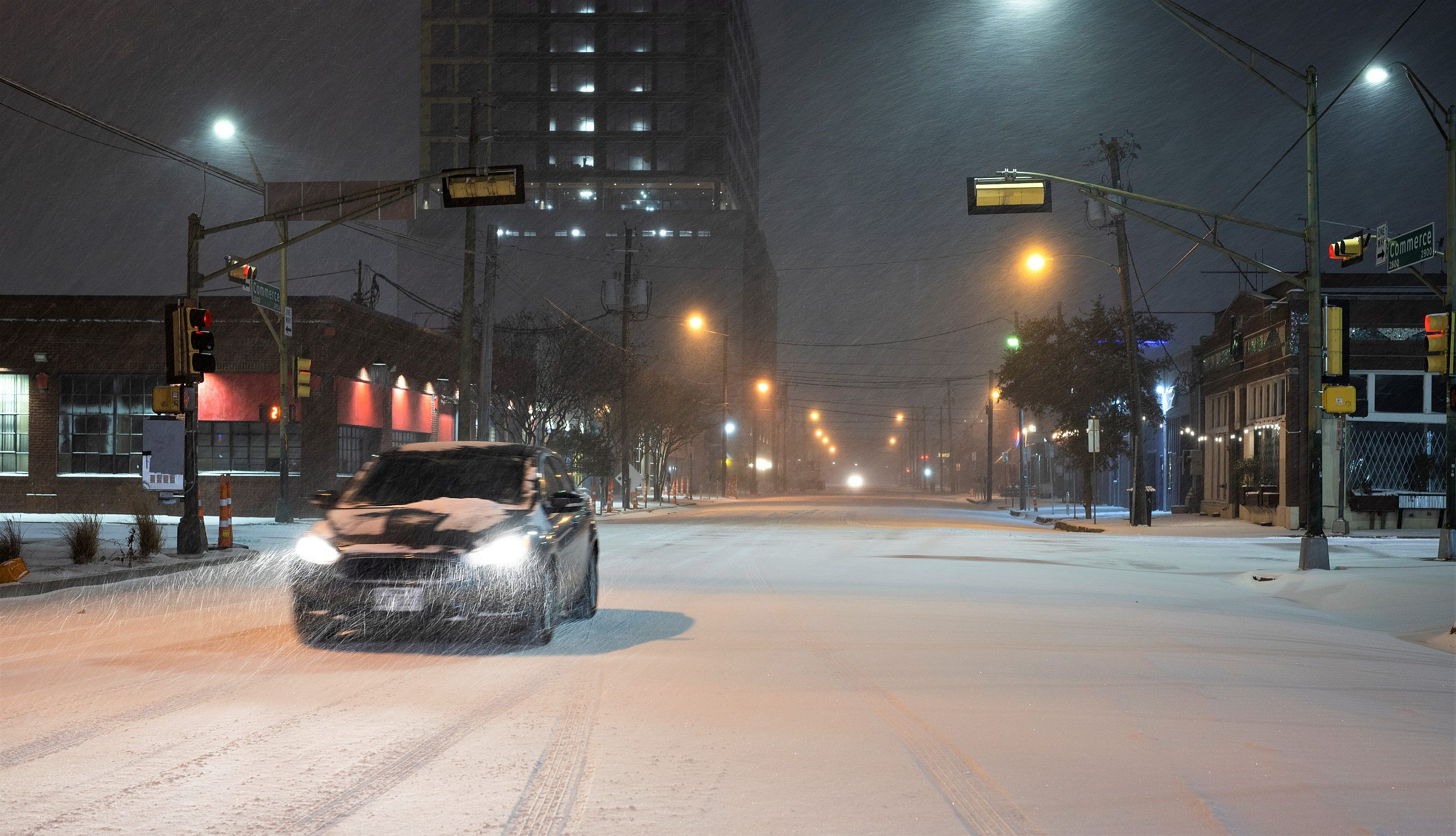 A car in Dallas drives through the snow on Feb. 15, 2021. Credit: Matthew T. Rader via Wikimedia Commons.

‘Plenty of practice when it comes to natural disasters’

It was amid these conditions—and despite the ongoing COVID-19 pandemic—that members of the Jewish communities throughout the Lone Star State mobilized to help people in need. They opened their doors to friends without power, cooked meals, arranged for medication pickups for those homebound, and, in one extreme case, mobilized to ensure that hundreds of doses of critically needed coronavirus vaccines would not go to waste.

“Many members of our community have been without power,” said Rabbi Ari Sunshine of Congregation Shearith Israel in Dallas. “We’ve also heard about a number of folks who had pipes burst, and in some cases, had flooding damage ranging from minor to quite major.”

“At Shearith Israel, we have been trying to match up congregants in need of resources (hot food, warmth, a warm place to sleep, etc.) with other congregants who have not been affected,” said Sunshine, who along with his family, took advantage of a member’s hospitality as he had no power for two days. 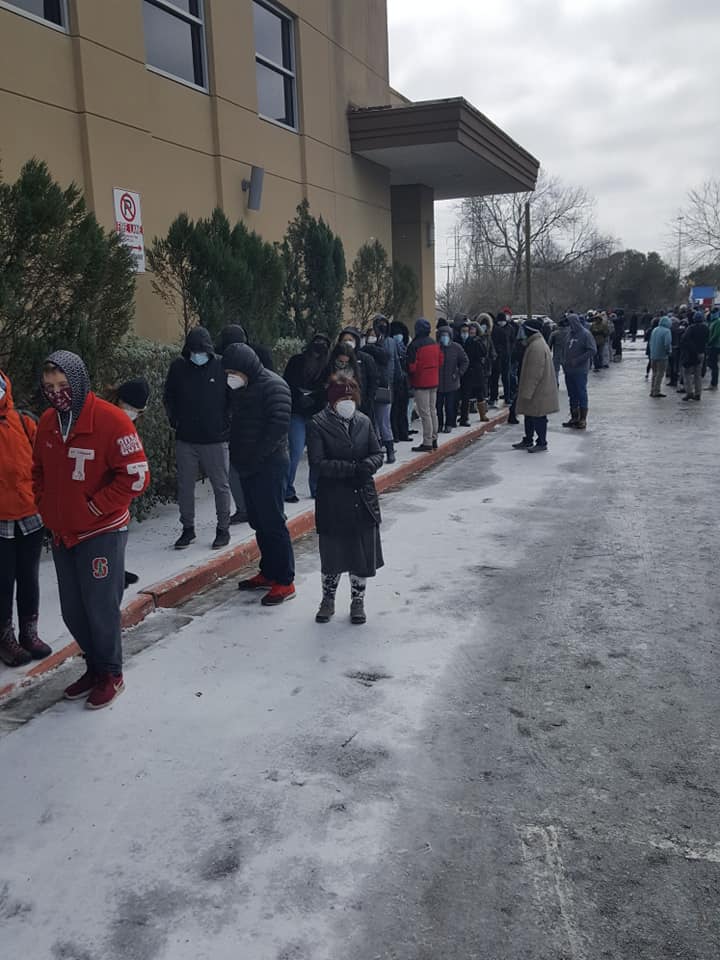 People line up to receive a COVID-19 vaccine outside of Texas synagogue after a freezer lost power. Credit: Rabbi Barry Gelman.

Now back at home, Sunshine said his congregation is continuing to look after others.

“We have initiated an emergency fundraising effort tied into the mitzvah of matanot l’evyonim for Purim to raise money to help those in our Jewish community and larger Dallas community who are in most acute need,” he said, “with 50 percent of the funds going to Jewish Family Service of Greater Dallas and 50 percent going to the North Texas Food Bank.”

In the first 24 hours of the campaign, which runs until Purim starts on Feb. 25, the synagogue had already raised nearly $20,000.

In Houston, the winter weather and resultant issues proved a test of the Jewish Federation of Greater Houston’s relatively new Jewish Response and Action Network (JRAN).

“One thing about living in Houston is that we have had plenty of practice when it comes to natural disasters,” said Jackie Fisherman, director of government relations at the Federation and organizer of JRAN. “This is different. Even in Hurricane Harvey, there were areas of Texas that were unaffected” and could send aid. “This is widespread. But we were prepared, and we have risen to the situation as best we could.” 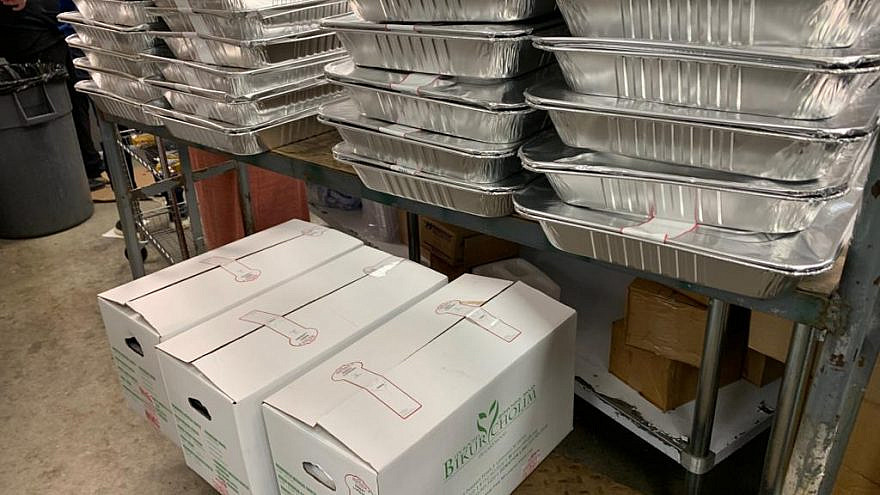 Kosher food to be distributed to those in need throughout Texas. Credit: Courtesy.

Part of JRAN’s mission was to create a network of Jewish communal leaders—synagogue rabbis, heads of local organizations, etc.—who could provide real-time, on-the-ground feedback on emergency conditions and what was most urgently needed. That network was put to the test this week.

For instance, when word came that a senior residence was about to run out of fuel for their generator, Fisherman was able to connect them to the proper authorities to make sure they got what they needed.

“It’s been so heartwarming to see how the community has come together,” she said, pointing out two particularly emotional moments. The first found dozens of volunteers stepping in to deliver kosher meals to homebound seniors—provided through the Evelyn Rubenstein Jewish Community Center—when the regular volunteers couldn’t make it in.

“It’s amazing that people were able to come out—even though we were in the middle of an ice storm, the power was out, there were no street lights—and deliver the food. These deliveries,” she continued, “also served as a well-check on the homebound seniors, most of whom were OK but cold.”

The other particularly inspiring act, said Fisherman, was how a house of worship, United Orthodox Synagogues, mobilized in mere minutes to become a vaccine-distribution center when a freezer at the local health department holding critical doses of the COVID-19 vaccine failed. “It made such a big impact. It was open to everyone—Jew, non-Jew—they used every last drop of vaccine.” 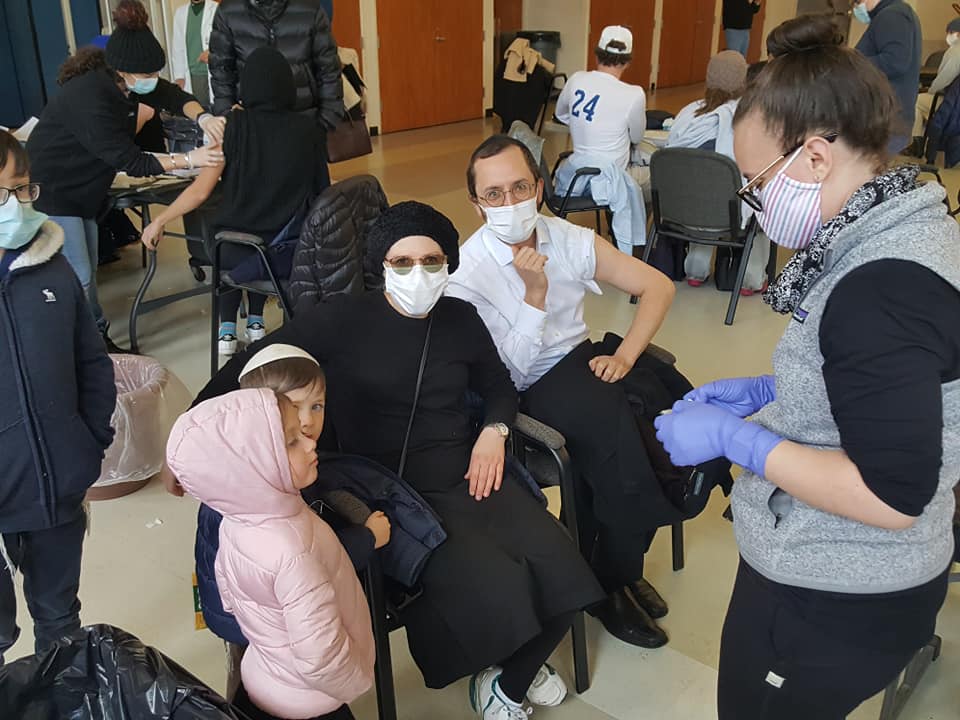 And they did it not once, but twice.

In recounting the experience on Facebook, Rabbi Barry Gelman of the United Orthodox Synagogues wrote that the synagogue was notified at 9:30 a.m. that hundreds of doses of the Moderna vaccine “had to be used, as some of the county freezers malfunctioned.”

Knowing they needed to be used within hours of being removed from the freezer, there was no time to waste. The rabbi called the synagogue’s president to get permission to use the building as a vaccine-distribution site. With 35 minutes of that initial call, members of the synagogue community had established a working distribution site with spaces for check-ins, screenings, vaccinating and the requisite 15-minute, post-vaccination waiting spot.

“We distributed over 350 vaccinations. Emails and WhatsApp [messages] were sent, and folks from all walks of life flocked to UOS,” said the rabbi. “We saved lives today!”