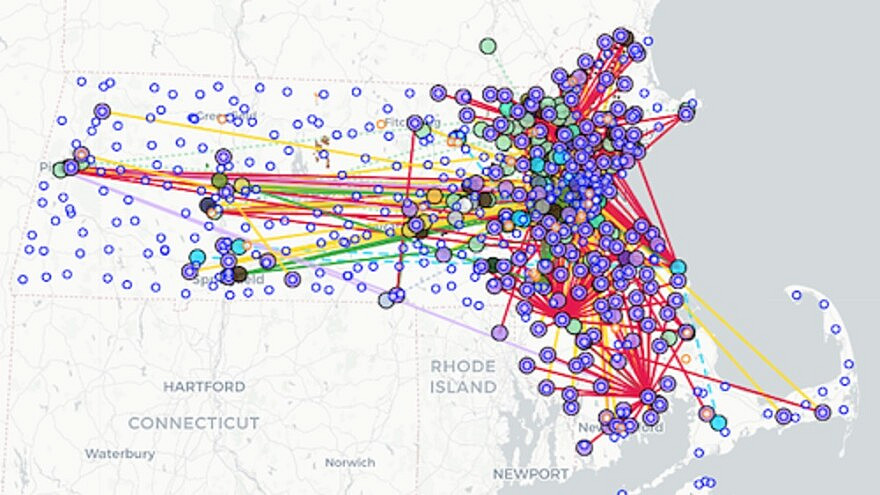 (October 9, 2022 / JNS) In response to its student paper’s editorial board endorsing the controversial Boston “Mapping Project” of Jewish sites around Massachusetts, Wellesely College condemned the project for promoting anti-Semitism.

“While it is not my practice to comment on the newspaper’s editorials, I do feel the need to make it clear that Wellesley College rejects the Mapping Project for promoting anti-Semitism,”  Wellesley College President Paula A. Johnson wrote in a letter to the community.

Johnson said she is concerned that the project “poses a significant threat to the physical security of the Jewish community of Greater Boston, including neighbors and partners of the College.”

The project, published this past summer by BDS supporters, shows the locations of a range of Massachusetts-based Jewish groups, synagogues, schools, police departments, media and other institutions that the anti-Israel activists claim should be “dismantled.” The project’s website hosts a map with the locations of their targets and information about them, including the names of some of their staff.

“We believe that the Mapping Project is providing a vital service,” the Wellesley News editorial board wrote. “Collecting data about these institutions, tracing their financial and political activity and publicizing this information is incredibly important.”

According to the Mapping Project’s website, the purported aim of the project is the development of “a deeper understanding of local institutional support for the colonization of Palestine and harms that we see as linked, such as policing, U.S. imperialism and displacement/ethnic cleansing.” Following its launch, the project was widely condemned by the Jewish community as steeped in anti-Semitic conspiracy theories and tropes.

“Claiming that Jewish people and organizations are responsible for a host of societal harms and calling for action against them is, by definition, anti-Semitism,” Johnson said. “Wellesley College believes that targeting people based on their race, religion, ethnicity or any other protected identity, such as gender identity or sexual orientation, is an affront to our shared democratic values and to the College’s commitment to diversity, equity and inclusion. We will continue to strive to make our campus a safe and inclusive place for all members of our community.”

In the News editorial, the students demanded that the college’s administration and board of trustees align with the BDS movement, taking particular issue with the college having a relationship with Birthright Israel.

“The Wellesley Investment Office should immediately withdraw any investments in entities based in Israel or those that support the apartheid regime,” the editorial board members wrote. “The College should cease promoting Birthright Israel, foster an environment where Palestinian students feel free to express themselves and cut ties with any suppliers or vendors that provide support to the Israeli government.”

“We proudly support the BDS movement and the liberation of Palestine, and we call on our fellow students, our professors, Wellesley’s administration and the Board of Trustees to do the same,” the article concludes.

The Anti-Defamation League New England praised Johnson in a statement, claiming her statement against the project “sends a reassuring message to students, faculty and our community.”

Wellesley College President Johnson's strong repudiation of the Wellesley News endorsement of the Mapping Project. The Project's continued dissemination of antisemitic conspiracy theories and targeting of the Jewish community is abhorrent and has no place on any campus pic.twitter.com/5EWTmsQjIf