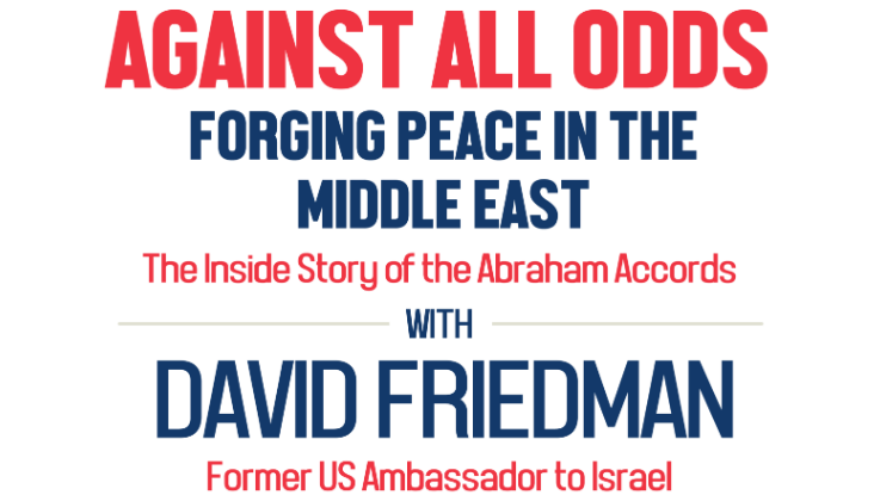 (October 14, 2022, Toronto, JNS Wire) Only a few short years ago, critics derided Israel as an international pariah, declining in international status and finding itself increasingly isolated.

Events of recent years have shown those pronouncements to be dramatically wrong.

The Abraham Accords of September 2020 kicked off a tidal wave of countries establishing or otherwise expanding their relations with Israel, including Bahrain, the United Arab Emirates (UAE), Sudan, Morocco, Kosovo, Chad and others.

More countries may soon follow suit, with media reports suggesting that even Saudi Arabia, the custodian of Islam’s two holiest sites, Mecca and Medina, has started to loosen its erstwhile hostility to the Jewish State, though full diplomatic relations may still be a while off.

On Thursday, October 20 at 7:30 p.m. EST, HonestReporting Canada is excited to be hosting Ambassador David Friedman, the former American envoy to Israel who was instrumental in orchestrating the Abraham Accords, for an in-depth discussion showing behind the scenes of the agreement, and helping shed light on what the future may hold for relations between Israel and its neighbors throughout the Middle East and beyond.

Ambassador Friedman, author of Sledgehammer, How Breaking with the Past Brought Peace to the Middle East, will also explain how contrary to the conventional wisdom espoused by seasoned Mideast diplomats, comprehensive peace with the Arab world didn’t require the Israelis and Palestinians to reconcile first.

There is no cost to attend the webinar, and all are welcome, so mark your calendars now!

Simply join the conversation via Zoom at the following link on the day/time of our webinar: https://us06web.zoom.us/j/87603072169.

David Friedman served as the US Ambassador to Israel from 2017-2021. Under his leadership, the United States coordinated the Abraham Accords between Israel, Bahrain and the United Arab Emirates (UAE). In 2020, The Jerusalem Post named him the most influential Jew in the world, and in 2021 he was nominated for a Nobel Peace Prize.

Republish this article
About The Publishers
HonestReporting Canada
HonestReporting Canada is an independent grass-roots organization promoting fairness and accuracy in Canadian media coverage of Israel and the Middle East. With the assistance of our over 45,000 members from coast to coast, HRC monitors the media, recognizes excellence and exposes inaccuracy and bias in Canadian reporting on the region.
Publish your organization's press release on JNS Wire
Releases published on the JNS Wire are communicated and paid for by third parties. Jewish News Syndicate, and any of its distribution partners, take zero responsibility for the accuracy of any content published in any press release. All the statements, opinions, figures in text or multimedia including photos or videos included in each release are presented solely by the sponsoring organization, and in no way reflect the views or recommendation of Jewish News Syndicate or any of its partners. If you believe any of the content in a release published on JNS Wire is offensive or abusive, please report a release.
Never miss a thing
Get the best stories faster with JNS breaking news updates