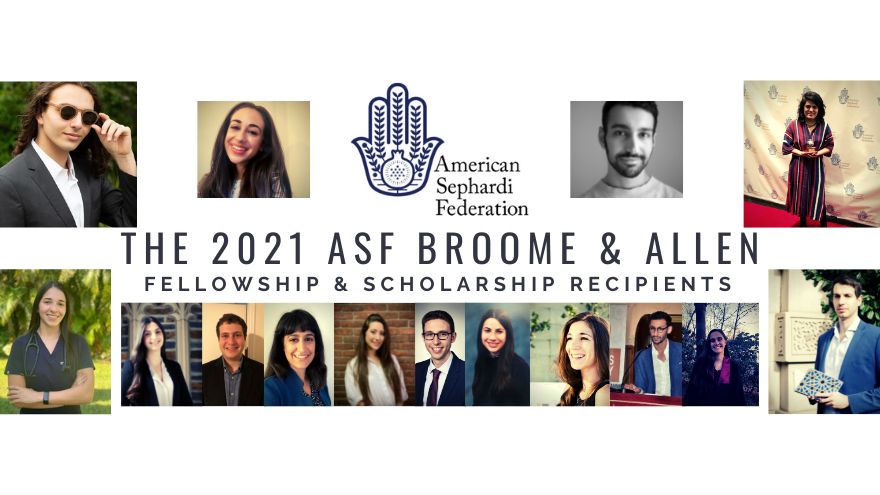 ASF Broome & Allen Fellows and Scholarship Recipients represent and reflect the rich diversity of the Greater Sephardi world in their family backgrounds as well as research interests. Amongst the recipients are students from Germany, Israel, Morocco, Panama, Spain, and Venezuela.

Starting in the fall semester, Fellows will be able to utilize the ASF’s Sephardi Scholars Center at The Center for Jewish History as a hub for research and place for them to conduct seminars, classes, lectures, and discussions. Fellows are also eligible for additional research, conference, teaching, and publication grants, as well as to have their work featured in the ASF’s Sephardi World Weekly, Sephardi Ideas Monthly, and The Sephardi Report.

“These young students represent an important ingredient securing ASF’s mission to preserve and promote the history, traditions, and rich mosaic culture of Greater Sephardic communities. So we greatly appreciate them and their Sephardic Jewish values being present at these excellent educational institutions.”

ASF Broome & Allen Scholarship Recipients are innovators taking initiative, connecting Jewish pasts and presents. They include one student who was a Bronfman Fellow and speaker at the ASF’s third New York Ladino Day in 2020; a senior studying the History of Architecture and Urban Development at Cornell University while pioneering the new Jewish activism, including by co-founding Jewish on Campus (another recipient, a University of Chicago undergrad, is the CEO of Jewish on Campus); and the winner of the prestigious In Vitro Biology Award and first place at the New Jersey FFA State Agriscience Fair. Four recipients—Isaac de Castro, Julia Jassey, Andrew Marcus, and Benjamin Zatz—are ASF Young Leaders.

Daniel Stauber, who is valedictorian of the Buckley School’s Class of 2021 and will be attending Stanford University in the fall, sees the ASF Broome & Allen Scholarship as an opportunity to continue his family’s tradition of American Sephardi leadership:

“I aspire to be like my great-great-grandmother one day, making an impact on the world around me, both locally and globally.” Stauber’s “great-great-grandmother, Leah Cohen (Mrs. Marco Cohen), helped found the Sephardic Home for the Aged” formerly in Brooklyn, and her son, his “great-grandfather Moses M. Cohen… was an original founder, attorney, and president of the Sephardic Jewish Brotherhood of America. He was born in Izmir, Turkey in 1904 and emigrated with his family in 1912 to avoid the persecution of the Sephardic Jews in Turkey.”

The archives of both the Sephardic Jewish Brotherhood of America and Sephardic Home for the Aged are integral parts of the ASF’s National Sephardic Library & Archives.

ASF’s Broome & Allen Fellows include a scholar of Judeo-Arabic, Ottoman Turkish, Hebrew, and Ladino who is the sole recipient of the NYU Torch International Research Fellowship for 2020-2021; a narrative researcher at Columbia explicating the lives (including love letters) of her grandparents in mid-20th century Morocco; a former Fulbright scholar who studied Yemeni Jewish narrative construction in Israel and British colonial complicity in anti-Jewish violence in ‘Aden, Tripolitania, and Mandate Palestine, whose articles have been featured in the New York Times, The Hill, Haaretz, and Tablet Magazine; the CEO of Ladino 21, an online initiative to preserve Judeo-Spanish for the 21st century; a Moroccan scholar in Germany researching children’s stories in Judeo-Maghrebi literature; the creator of a unique Heritage Program that has recorded over 400 oral history interviews with recent Sephardic Jewish immigrants from Egypt, Lebanon, Iran, Iraq, Mexico, Panama, and Syria; the Sephardi-Israeli Duke University grad student who is already managing tours and productions for American bands, such as Tame Impala; a medical ethicist, with a dual appointment to Bar-Ilan University and the Technion, who is researching the application of Maimonidean principles to contemporary medical practice; and the ASF Ronit Elkabatz A”H “Rising Star” Pomegranate Award and NYU Fusion Film Festival’s Grand Prize-winning Yemenite- & Spaniolit-Israeli filmmaker—a recipient of the NYU Tisch Dean’s Fellowship, ISEF Nina Weiner & Lily Safra International Fellowship, and NYU Provost Writing Fellowship in London—whose films have premièred at the Montreal World Festival and Venice International Film Festival.

ASF Broome & Allen Fellow Andrew Marcus, founder of the Greek Jewish Festival and the brother of a past Broome & Allen Scholarship Recipient, said he is:

“Grateful for all that ASF does to perpetuate our beautiful heritage and support the next generation of our community.”

The Broome & Allen Fund was founded over 70 years ago by a group of Sephardic businessmen determined to provide a vacation for hundreds of children who otherwise would not be able to escape the hot and humid summers of New York City. As the need for this service waned, the Fund began to offer scholarships. Since the year 2004, over one hundred grants have been awarded.

Murray Farash, the last of the original Broome & Allen Fund Board Members and a distinguished ASF Board Member, says:

“These exceptional young people represent the best of our Sephardic community and we are glad to encourage and nurture their development.”

“This class of brilliant scholars and promising students are a credit to Murray’s dedication and determination to perpetuate the Broome & Allen legacy.” 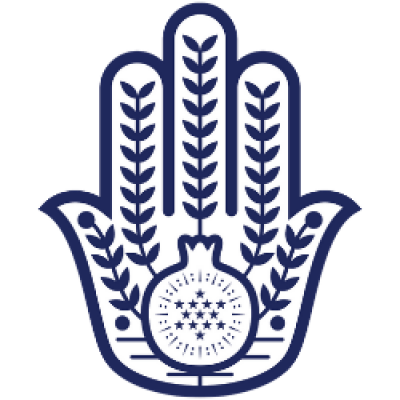 American Sephardi Federation
The American Sephardi Federation, preserves, promotes, and perpetuates, the history, traditions, and rich mosaic culture of Greater Sephardic communities. A founding partner and integral organization within the Center for Jewish History with an over 50-year history, the ASF hosts high-profile events and exhibitions, produces widely-read online (Sephardi World Weekly, Sephardi Ideas Monthly, & Letters from the Land of Israel) and print (The Sephardi Report) publications, supports research, scholarship, the Broome & Allen and Sephardi House Fellowships, the ASF Institute of Jewish Experience, and National Sephardic Library & Archives, as well as represents the Sephardic voice in Jewish communal and diplomatic affairs as a member of the Conference of Presidents of Major American Jewish Organizations and World Jewish Congress.
Publish your organization's press release on JNS Wire
Releases published on the JNS Wire are communicated and paid for by third parties. Jewish News Syndicate, and any of its distribution partners, take zero responsibility for the accuracy of any content published in any press release. All the statements, opinions, figures in text or multimedia including photos or videos included in each release are presented solely by the sponsoring organization, and in no way reflect the views or recommendation of Jewish News Syndicate or any of its partners. If you believe any of the content in a release published on JNS Wire is offensive or abusive, please report a release.